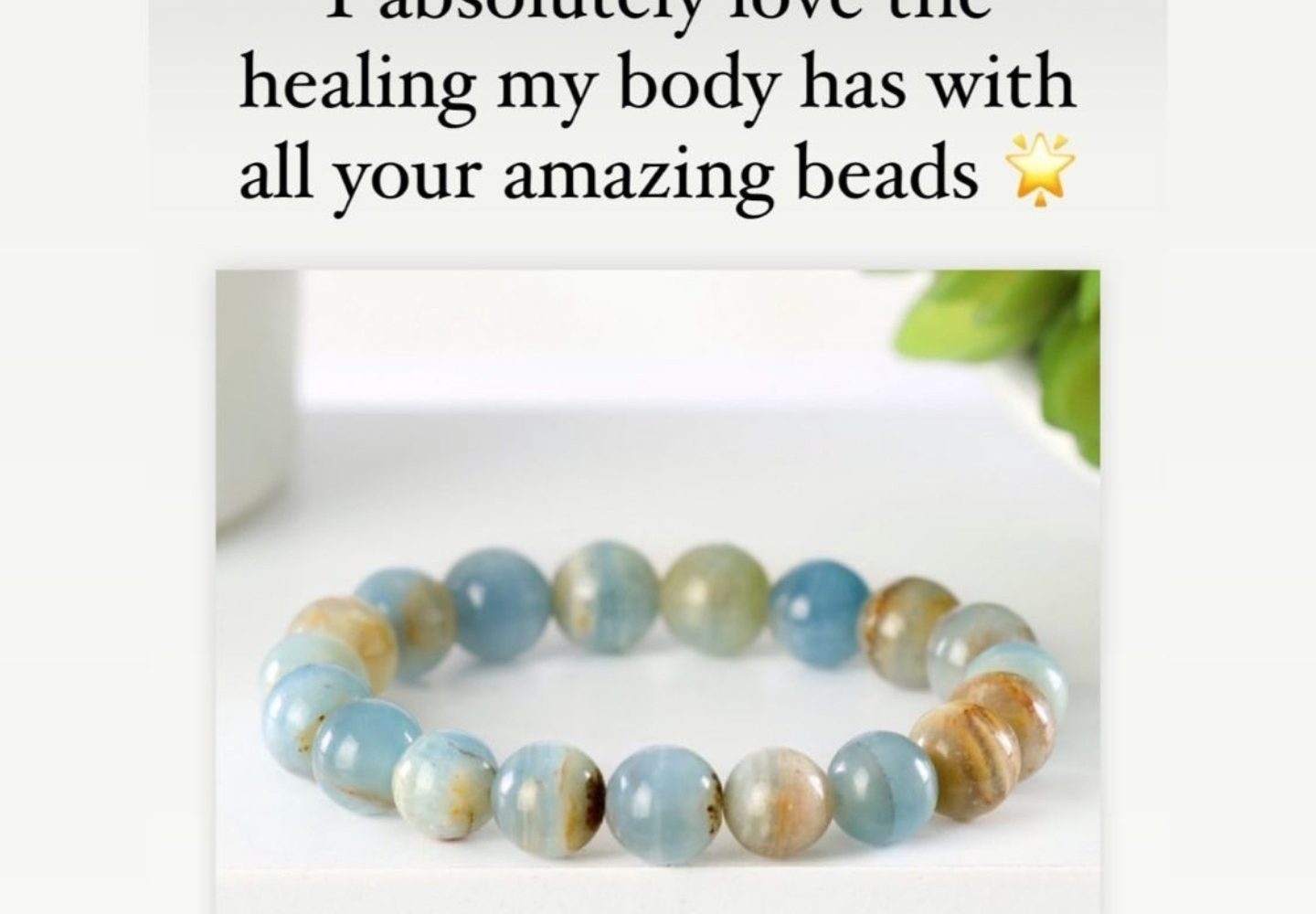 This Week in Corona Scams, the “BS Beads” saga goes from annoying fever pitch to confusing fever dreams thanks to some wildly over-the-top shilling.

Also: Who’s ready for another round of eye-popping anti-vaccine conspiracy theories? Thanks to Nicki Minaj, we have a whole lot more debunking to do.

Here we go again: “BS Beads” really live down to their name. 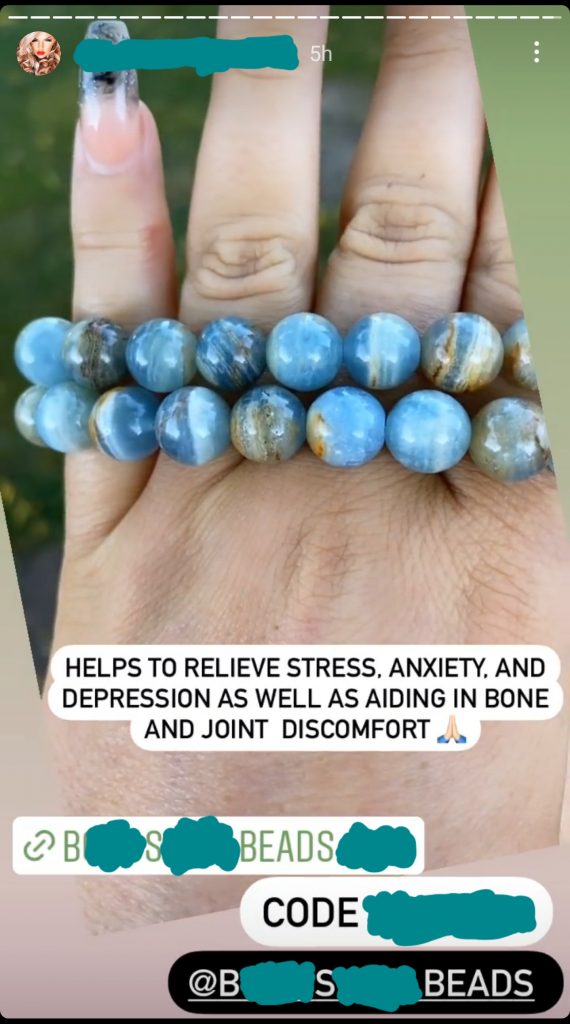 Longtime readers know how closely we’ve been following the “BS Beads” saga since April 2020, and why the “BS Beads” story matters. Here are some fresh reminders. Over the past two weeks, “BS Beads” founder and CEO “MB” and multiple paid “influencers” have gone hot and heavy with their medical claims.

Last week, “MB” herself announced that she had tested positive for COVID-19 and recovered. Yet instead of encouraging her followers and customers to get vaccinated, and instead of apologizing for her salesperson “KM” claiming that the beads cure “Corona Borona” last year,  “MB” just seamlessly transitioned into another sales pitch for her new candle.

Contrary to “KM” and “MB”, there’s still no actual scientific evidence to back up their “healing” claims.

The “crystal healing” tradition has strong links to New Age spirituality, and its supposed value as an “alternative medicine” hews closely to the same claims we see for reflexology, reiki, chiropractic, and “Traditional Chinese Medicine”. But as we’ve previously pointed out in these pages, none of these “alternative medicine” traditions are based in sound medical science. Though patients may feel some kind of placebo effect, there’s still no proof of “natural healing stones” functioning as effective medicine for any medical condition.

Of course, none of this has stopped “KM” from touting her “research” and “discoveries” on “chakras” and “meridians”. Despite receiving a warning letter from the FTC last year, “KM” continues to make these false claims on her Instagram and Facebook pages. Even worse: “MB” makes her own false claims, and she has encouraged her other contracted “influencers” to amplify these false health claims.

As we’ve previously warned, “BS Beads” only marks one channel of medical disinformation that flows so freely and wildly throughout the “Big Tech” social media platforms. While wannabe “star influencer” stars like “MB” and “KM” may have limited reach, they’re just part of a much larger Influencer Infodemic that continues to wreak havoc on public health around the world.

On September 13, hip-hop superstar Nicki Minaj decided to break the internet by claiming that a friend of her cousin in Trinidad got dumped by his spouse-to-be because “the vaccine” allegedly made his testicles swollen. This sparked an international firestorm over Minaj’s accusations, a confusing round of accusations on President Joe Biden’s alleged response to Nicki Minaj, and a whole new round of “cancel culture” handwringing following Twitter’s handling of the Minaj Affair.

Fact Check: There is zero evidence suggesting that any of the COVID-19 vaccines threaten male sexual health in any way. In fact, COVID-19 itself poses a far more dangerous threat to sexual health than any of the vaccines. Early evidence thus far suggests that COVID-19 might inhibit sperm production and fertility once it invades the testicles. In contrast, there’s simply no proof to back up Nicki Minaj’s claims about orchitis, which is actually typically caused by viral or bacterial infection.

Once again the actual science on orchitis, male sexual health, COVID-19, and the COVID-19 vaccines all too often got lost amidst Nicki Minaj doxxing journalists (again), far-right media outlets’ rush to relish the “cancel culture controversy”, and the same far-right media outlets trying to turn Nicki Minaj’s anti-vaccine disinformation into a “Biden scandal” because the White House offered Minaj a phone call with their public health officials to discuss vaccine safety. Amidst all the maddening noise, let’s keep sight of the clear signal emanating from the actual medical science at hand.

This did not start with Nicki Minaj. This did not even start with Tucker Carlson. Let’s slide down the Conspirituality rabbit hole once more to understand why “bro-science” muddies the truth on actual medical science.

Earlier this week, Fox News star polemicist Tucker Carlson stunned media watchers (again) by not only championing Nicki Minaj’s baseless “swollen testicles” rumor, but also falsely accusing Biden of purging the U.S. military of “sincere Christians, free thinkers, [and] men with high testosterone levels” through federal vaccine mandates. Carlson also lied about “natural immunity”, and he even falsely claimed, “Here you have the United States Army doing PR for Satanists.” There is obviously zero evidence that any vaccines function as the “Mark of the Beast”, and we already know from then President Donald Trump’s “natural herd immunity” strategy that “liberating” COVID-19 just leads to more unnecessary illness and deaths.

Regular readers should know where we’re heading next: Tucker Carlson’s wildly mendacious rumors did not “come out of nowhere”. After all, Alex Jones and his one-time buddy Joe Rogan have frequently alluded to alleged conspiracies to “emasculate” men in one way or another. While Jones’ overall “influencer” status has gradually waned since his 2018 mass deplatforming, he still has residual “star power” thanks to the more seemingly mainstream “influencers” like Joe Rogan and Steven Crowder who continue to platform him.

Even worse – Rogan, Crowder, and many more “alt-right influencers” continue to platform “Conspirituality wellness gurus” like Mikki Willis, JP Sears, and Paul Chek. These “alpha male gurus” love to boast of how their “natural immunity” is superior because they’re allegedly the perfect embodiment of optimal health. While physical fitness certainly helps with overall health, there’s no guarantee that men with fitness model or bodybuilding magazine worthy physiques are automatically “naturally immune” from COVID-19. Even if you’re young and in great shape, you’re still better off getting vaccinated than taking any advice from “gurus” who lack any actual medical science credentials.

Basically, this is peak “bro-science”: the combination of toxic masculinity and anti-science conspiracy nonsense. Savvy bodybuilders and other health professionals have already debunked “bro-science” mythology, and we already had prior go-arounds with “bro-science” in regards to the false rumors about anabolic steroids and COVID-19. It’s just wild to track these “bro-science” rumors from these “Dr. Chad” workout and supplement salespeople, through the internet’s most eye roll worthy “influencers”, to Fox News’ primetime lineup.

As we’ve been noticing since the earliest days of this series, “corona scammers” seek to profit off the pandemic and sell “wellness” that may not actually improve your health. JP Sears and lead QAnon figure Ron Watkins now sell their shitposts as NFT’s (yes, really). Alex Jones continues to sell overpriced vitamins. “MB” sells “BS Beads” and “BS Bead” branded candles and rocks while claiming that the “natural healing” justifies her wildly high prices. All these “corona scammers” who love to rail against “big pharma and big guv’mint greed” also love to sell their products all over the internet, and often do so at rather premium prices.

Meanwhile, Americans can get vaccinated at no cost to them. So who’s really acting “greedy” here? Think about it. 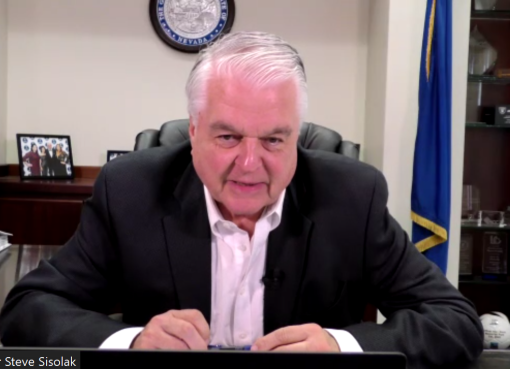 As President Joe Biden and Congressional Democratic leaders continue their efforts to salvage their Build Back Better and "bipartisan" infrastructure bills, Governor Steve Sisolak (D) and some of his
Read More

Justice for All? A Conversation with UNLV’s Michael Kagan and Mayra Salinas-Menjivar on Immigration in the Trump Era

Yesterday, we took a closer look at what immigrant communities here in Nevada are experiencing and what the 2020 Democratic presidential candidates promise to do about it. Yet while the candidates are
Read More