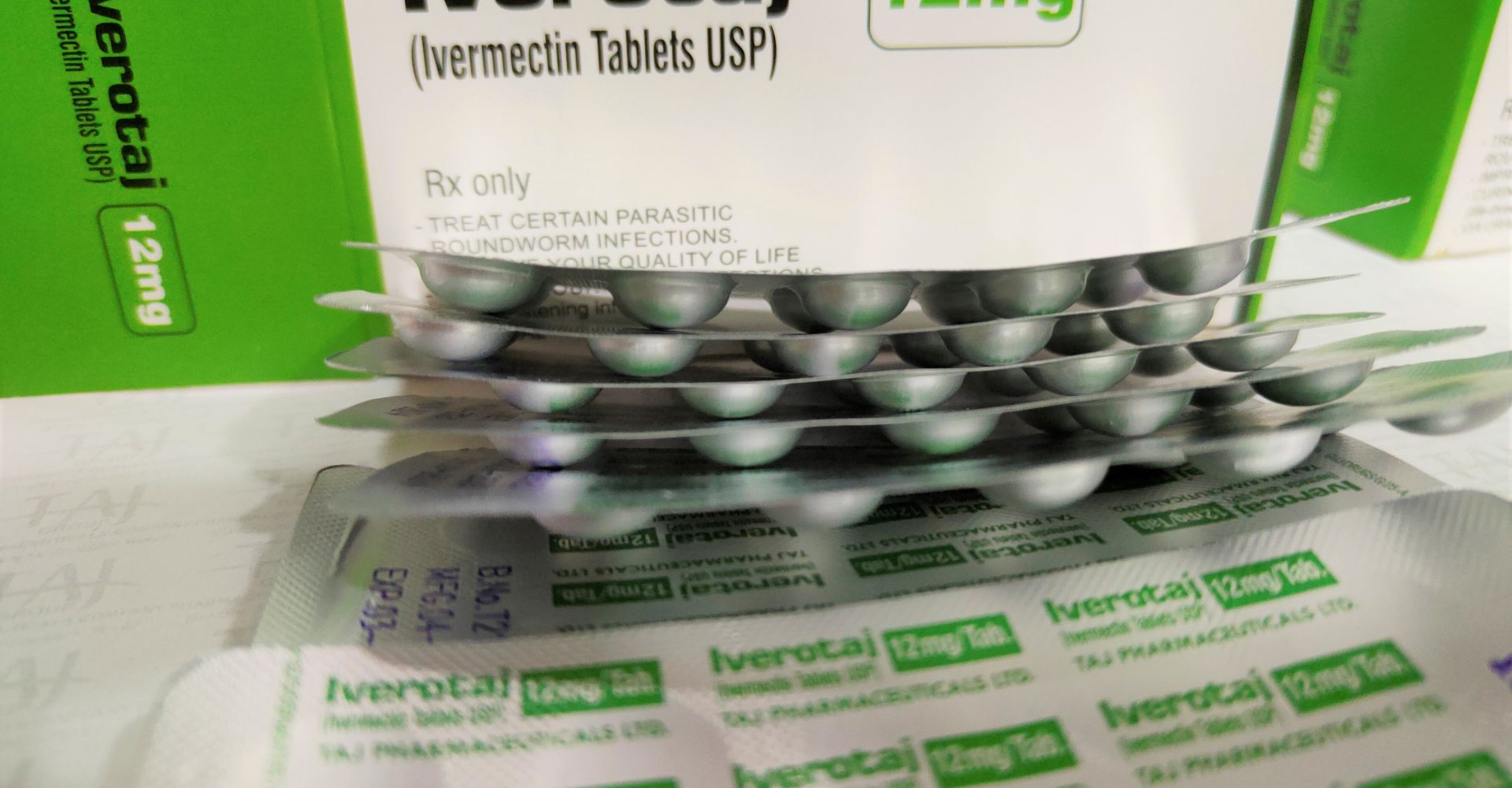 This Week in Corona Scams, we revisit the seemingly never-ending ivermectin melodrama. For weeks, we’ve been warning everyone not to buy certain influencers’ hyping up of the anti-parasitic drug that is not proven to treat, cure, or prevent COVID-19. And yet, here we are talking about ivermectin again.

As we’ve been saying all along, the Influencer Infodemic may always be operating in silly season, but the disinformation they peddle is downright dangerous.

First, let’s examine the big picture. How did America fuck this up, and why?

A 5th major factor needs to be added to my list of what’s driving transmission right now—though not new, it has been particularly bad recently—it’s misinformation & disinformation

We’ve created a political culture that rewards and thus incentivizes candidates + elected officials to make outrageous claims, take unfathomable positions, and act with a willful disregard for the truth.

As they erode confidence in democracy, they gain a cable news segment.

In so many ways, this COVID-19 pandemic has felt like the ultimate split-screen (alternate?) reality experience. On one side, medical science specialists and public health professionals comb through data and ask the people to “trust the experts”. On the other side, “corona scammers” of various stripes flood the internet with farcical nostrums, outrageous get-rich-quick schemes, and shameless pitches to join their team – and they frame all of this in “anti-establishment” language that gives the impression that they’re “populist crusaders” against the “evil globalist cabal”.

Even though the science has been quite clear for some time, public perceptions of the pandemic have been anything but. When public health authorities stray from the science and/or “massage” the truth, they might enjoy some short-term political victories, but those victories turn pyrrhic once the truth ultimately surfaces. Even worse, their missteps might convince more of the public to listen more to the “corona scammers” who are already telling them what they want to hear. I can hear it now: “Why pay attention to ivory tower elites and red tape peddling bureaucrats who won’t give us a straight answer when this nice-looking dude is just asking us to give his solution a fair shot?”

This is why it’s been so crucial for public health authorities to lead with science and truth. This is why they erred by rushing to declare “victory over the virus” despite evidence showing us still in danger. And yes, this is why they erred by dragging their feet in taking on the “corona scammers” who’ve come to flood our cyberspace so much that we’re now drowning in this completely preventable wave of COVID-19 infections, hospitalizations, and deaths.

Next, let’s take another look at the actual facts on ivermectin and COVID-19.

In July, and again this month, we pored through the scientific data on ivermectin and how it interacts with COVID-19. Spoiler alert: Multiple reputable studies and reviews of trial data have concluded that ivermectin does not work against COVID-19, and multiple “studies” that suggest otherwise have been found to be methodologically flawed and/or ethically problematic.

Yet instead of accepting the reality that ivermectin is at best unproven to help COVID-19 patients, ivermectin evangelists like Pierre Kory and Bret Weinstein have spread baseless “cancel culture!” conspiracy theories that have in turn radicalized their followers while they monetize the clickbait outrage. And because even more prominent media personalities like Joe Rogan, Bill Maher, Tucker Carlson, and Laura Ingraham have given Kory and Weinstein even larger platforms to spread disinformation, even more Americans have fallen prey to their ivermectin hype-fest.

Since our last check-in on ivermectin-palooza, hardly anything has changed on the medical science front. The Oxford PRINCIPLE Trial is still underway, so we obviously don’t know yet what they will discover (if anything). And when it comes to studies and trial data that are already on file, there’s still no reliable or conclusive evidence confirming that ivermectin has any potential to cure, treat, or prevent COVID-19.

Here’s another sobering reminder that actions indeed have consequences. And yes, this includes inaction in the face of clear and present danger.

In Mississippi, Arkansas, Kansas, and elsewhere across America, poison control centers are reporting a surge in calls about patients who’ve ingested ivermectin. More specifically, poison control centers are finding patients who’ve been ingesting ivermectin that’s meant to be used as a livestock dewormer because that’s the kind of ivermectin that they could obtain most easily without a prescription. Even now one can visit a certain multinational online retail site and find ivermectin products that are clearly labeled as horse medicine, yet are still being purchased for the purpose of human consumption.

Despite the growing reports of people being hospitalized after ingesting these livestock deworming drugs that were never intended for humans to use against COVID-19, a group of Tennessee Republican legislators are continuing their push to demand more access to ivermectin for humans. Meanwhile in Florida, a Martin County urgent care clinic continues to prescribe ivermectin to patients demanding some because “it’s cheap”. In Missouri, the Mayor of Lake Ozark publicly boasted on Facebook of his plan to sneak ivermectin into the hospital to give to a friend who’s suffering a severe bout of COVID-19. And in Arkansas, the Washington County Sheriff’s Department is actually (mis)using county tax dollars to give ivermectin to inmates at the county jail.

We haven’t even been immune to ivermectin-mania here in Nevada. Back in April some animal feed stores were being overrun by customers demanding ivermectin, and they didn’t always give the impression that they intended to give it to their horses and cows.

This is what happens when a critical mass of Americans lose all faith and trust in our health care system, our government, our economy, and our country in general. When they fear the politicians, the pharmaceutical companies, the insurance companies, and “Big Tech” are all lying to them, they might just listen to that “nice guy” on TV who tells them to try this “game changing miracle cure”, or perhaps to some friends on social media who insist the “miracle cure” works because their favorite podcaster had on some “scientists who sound legit”. After all, if we already have “the cure ‘they’ don’t want you to know!”, why bother with some “experimental” vaccine that everyone’s always arguing about on Facebook?

The desire for a “miracle cure” is understandable, but we shouldn’t abandon the vaccines we already have while searching for new treatments and a potential cure.

As we’ve been explaining for some time, the COVID-19 vaccines have been developed at breakneck speed, but they’ve nonetheless gone through rigorous review. Ultimately, we have plenty of evidence proving that they work at reducing further spread and preventing severe disease. In a way, anti-vaccine activists have sought to turn their “vaccine failure” rumors into a self-fulfilling prophecy by convincing so many Americans not to get vaccinated that this Delta Surge has become far more severe than it ever had to be, which in turn is making third doses and booster shots for the already vaccinated into more of a necessity going forward.

But wait, one might argue: Since the COVID-19 vaccines have become so “controversial”, why can’t we just focus more on treatments and cures? Actually, a multitude of medical researchers already are. But as a recent Mother Jones story points out, this research has already been proven to be quite expensive and time consuming, major brand-name pharmaceutical companies don’t like to fund research that involves cheaper generic rivals, and such treatment research can be just as vulnerable to political machinations as what has befallen the vaccines. This is not an argument against doing such research – It’s simply the explanation that research into potential COVID-19 treatments and cures is far from immune from the challenges that have emerged with America’s vaccination strategy.

While we do have some treatments available – such as the very expensive monoclonal antibody therapy, and perhaps the more easily accessible fluvoxamine (which was originally marketed as an antidepressant) – it’s simply safer and more cost-effective to promote vaccines that are already effective at preventing disease than to ditch vaccines in favor of treatments when we’re still in the realm of the unknown when it comes to what it will take to find a cure in our lifetimes, which potential long-term treatments are viable in the meantime, and how big of a health problem “Long COVID” becomes in the future. Besides, this does not have to be an either-or contest. We can utilize the safe and effective vaccines we already have, and we can continue to search for possible new treatments and cures.

This crisis stretches far beyond ivermectin and the false prophets who seek to profit off this pandemic.

As we say around these parts so often, this did not “come out of nowhere”. The pre-existing conditions of the “New Gilded Age” economy, our dysfunctional health care system, and the rush of traditional media consolidation that paved the way for “Big Tech” social media consolidation offered plenty of warning signs. Because we didn’t put enough effort into solving these crises sooner, the COVID-19 pandemic only laid bare for all of us to see now what far too many of us tried to avoid seeing pre-2020.

More traditional mainstream media outlets may be noticing the ivermectin crisis now, but this disinformation campaign has been raging across the internet since 2020. And really, this isn’t just about these false rumors about ivermectin as a “COVID-19 cure”. This speaks to the much broader crisis of confidence among the American public that public health authorities need to learn how to better address, and ultimately solve. It’s one thing to be reactive to whatever’s trending on any one day. It’s another to be proactive and solve problems before they metastasize into life-threatening crises.

The cover photo was provided by TajPharmaImages, licensed under Creative Commons, and made available by Wikimedia.

COVID-19 continues to spread more slowly and weakly, and that has a whole lot of Nevadans eagerly awaiting Governor Steve Sisolak’s (D) announcement on the end of the “statewide pause” that has had st
Read More

This has been quite the busy week, and the next few days promise even more action. On that note, it’s time for us to check in with four of the Democrats running for president next year. Tonight, the N
Read More

For months, I’ve been warning everyone to limit their time on the “poller coaster”, take the TV pundits’ on-air theorizing with massive grains of salt, and focus on what truly matters over the glitzy
Read More