Ever since we began covering the COVID-19 pandemic, we’ve been working our hardest to deliver true news and accurate information based on real science. Unfortunately, some “wellness experts”, celebrities, politicians, and other crispy characters don’t share our goal. As long as they continue to spread “fake news” about the novel coronavirus, we’ll have to continue debunking their lies.

No, COVID-19 is not Bill Gates’ secret weapon!

Look, I get why some folks are still upset with Microsoft founder and former CEO Bill Gates. Even after a federal judge ordered the breakup of Microsoft’s digital monopoly in 1999, Microsoft got that verdict overturned and subsequently scored a settlement to evade justice. And even though Microsoft’s Windows-powered monopoly later evaporated with the development of smartphones, tablets, and social media, the Microsoft saga established a disturbing precedent that’s allowed a new “Big Tech Quadrumvirate” of Amazon, Apple, Facebook, and Google to wield increasing control over the entire digital economy.

Now that that’s out of the way, let’s jump into the latest and greatest conspiracy craze to sweep the internet that Bill Gates once tried to submit to his will. What’s with the rumors that Bill Gates is an agent of Satan and/or the Antichrist himself, an evil emperor who engineered the launch of the novel coronavirus in order to force the entire world’s population to accept a “vaccine” containing a microchip that’s actually the “Mark of the Beast” that the Bible warned us about almost 2,000 years ago?

Breaking news: There’s zero evidence of COVID-19 leading to any “Mark of the Beast”, or of Bill Gates being any “Spawn of Satan”. Rather, the usual clique of far-right Christian fundamentalists and anti-vaccine activists distorted reports on the Gates Foundation’s funding of MIT’s research into potential “digital certificates” to better verify children’s vaccine records. An army of neo-Nazi hackers and infamous far-right “dirty trickster” (and convicted perjurorer) Roger Stone have since propelled these distortions and outright lies into larger circulation, and the Russian, Iranian, and Chinese governments are now taking full advantage of this to shift focus away from their own respective mishandlings of the COVID-19 pandemic and instead (falsely) blame some nebulous “globalist conspiracy”.

Regardless of how we feel about the Gates Foundation funding “digital certificate” research, and regardless of how we feel about Bill Gates establishing the kind of influence over international health infrastructure that he once held over how personal computers operate, we can not afford to indulge in the kinds of baseless conspiracy theories that literally kill people. Below, you’ll see why we just can’t.

No, Russia has not achieved “victory over the coronavirus”.

About a month ago, media outlets around the world were relaying “reports” from the Kremlin on Russia’s “remarkably low numbers” of COVID-19 infections and deaths. Spoiler alert: Russian President Vladimir Putin and his apparatchiks regularly lie, and this time is no different.

Just as President Donald Trump has deflected blame here in the U.S., and just as Chinese Premier Xi Jinping has deflected blame there, Putin and his regime have worked overtime to deflect blame onto nearly anyone and everyone other than one Vladimir Vladomirovich Putin. Ever since Moscow’s Mayor and Russian health care workers began poking holes in Putin’s claims of “Russia conquering the coronavirus”, the Russian government has been working furiously to change the narrative, even to the point of amplifying wildly false “globalist bioweapon” conspiracy theories (see above).

Last month, Putin declared a “national holiday” week and encouraged the kind of outdoor crowding that’s ideal for widespread COVID-19 transmission. Earlier this month, Putin and his Russian media lackeys made a big deal of the Kremlin’s “humanitarian aid” to the U.S. But as Russia’s own COVID-19 crisis intensified, Putin has had to postpone a referendum to allow him to stay in power until 2036 while asking the Trump administration to send ventilators to Russia.

Wait, why aren’t the “liberators” taking their own advice?

When asked if she would put herself on the casino floor with the workers she’d be endangering, the mayor dodges before saying, “first of all, I have a family.” https://t.co/GR5IgcgtgS

For all Donald Trump’s recent “liberating” bluster, he suddenly changed his tune yesterday when Georgia Governor Brian Kemp (R) took Trump up on his “liberating” offer. For all of Las Vegas Mayor Carolyn Goodman’s seemingly nonstop psychobabble, she refused to take up CNN anchor Anderson Cooper’s offer for her to try her own “herd immunity” advice. And for all of misinformation warlord Alex Jones’ nonstop shilling of “miracle cures”, Jones now sells InfoWars branded face masks while threatening to retreat to some magical redoubt somewhere outside Austin.

Think about this: As Jones encourages his fans to “liberate Texas”, Goodman inspires her new far-right fan club to “liberate Nevada”, and Trump continues to try to have it both ways with his own “liberating” rhetoric, why won’t take their own advice? Might it be that beneath all the public bluster, Trump, Goodman, Jones, and other snake oil shillers know their own advice hurts people who actually take it and run with it? And might it be that beneath the “liberating” rhetoric lies a far more nefarious and suppressing motive?

Considering what we now know about how COVID-19 spreads, including how it can spread by people showing no symptoms of illness, and considering what we already know about our ongoing lack of medical supplies (including test kits and PPE) needed to test, trace, and treat this disease, it’s long past time for us to escape the dangerous waters of this great conspira-sea and seek shelter on higher ground.

In the past 16 months, we've all had to come to terms with the ugly truth about violence, consent, and power. When are victims and survivors allowed to speak, and when are we allowed to believe them?
Read More

Blueprint for a “Blue Wave”: The Last Word on How Progressives Won in 2018

Over the past month, we've been poring over the election results to determine how and why Nevada Democrats won so big this year. At UNLV today, we heard directly from the local progressive leaders wh
Read More 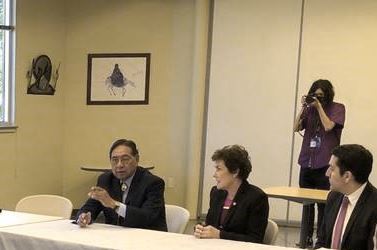