In Federalist No. 10, James Madison argued man’s nature made factions[i] inevitable.  And “the most common and durable source of factions has been the various and unequal distribution of property,” he argued. [ii]

People holding differing opinions and differing amounts of wealth and property tend to form alliances. Madison says they will sometimes work against the public interest and infringe upon others’ rights.

Since Donald Trump took his seat in the Oval Office in 2017, America’s billionaires have become 10.6% richer.[iii] 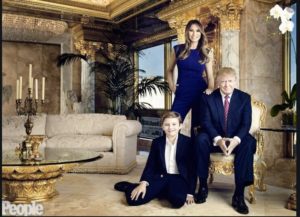 The gap between the rich and the poor [iv ] had widened to a record high in 2018 since the US Census began tracking it 50 years ago, reported Taylor Telford for The Washington Post, [v ] citing US Census data. The chasm is most prevalent in wealthy coastal states and areas with “widespread poverty,” Telford wrote.

Madison feared that the unpropertied majority would use majority power to redistribute wealth at the wealthy minority’s expense.

To mitigate the dangers of majority rule, Madison argued for a: Removing the cause of the faction or b:  controlling its effects.  Removing the cause of faction, he wrote, required the destruction of liberty because “liberty is to faction what air is to fire.” [vi] Unfortunately, creating a society homogeneous in opinions and interests is impracticable, he said.

According to Madison, the solution was an extended republic [vii],[viii] where citizens elect a small body of representatives, holding community interests above their own, who then vote for laws. 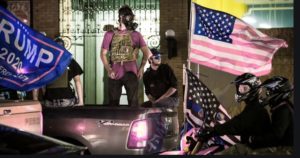 The Trump movement is somewhat unique. It combines two quite different factions. While increasing the wealth of a small minority, he also relies on support from several far less wealthy individuals who hold a combination of racial and sexual anxiety, hatred of government and the expert class, and opposition to internationalism.

Madison might look at the 2020 national election polls and conclude that, at present, most polled Americans (52.3%) support the redistribution of both wealth and social benefits as expressed by Biden-Harris. While the minority (42.9%) supporting Trump-Pence reflect those seeking to protect wealth and those angered by social progress. 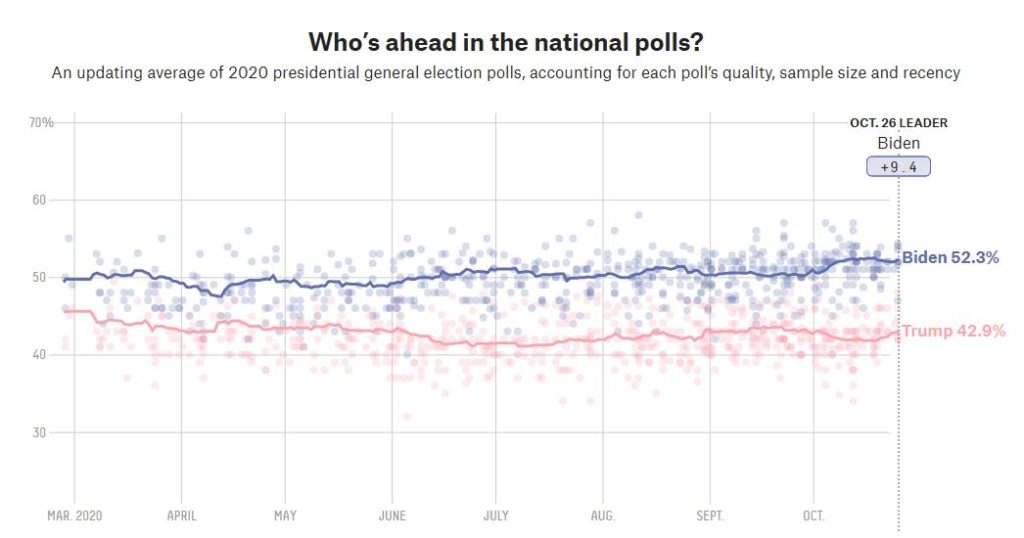 The gap between those supporting Biden-Harris and those siding with Trump-Pence is more significant than a 9.4 % political poll gap. Those holding with either side have deeply divided social, political, and economic opinions on what constitutes the public interest.

If Trump loses in November, one can expect action from well-funded ultra-right leaning social progress resisters urged on by conservative pundits like Victor Davis Hanson, who feels that Barack Obama and the Democrats have brought the country to the brink of a literal civil war. 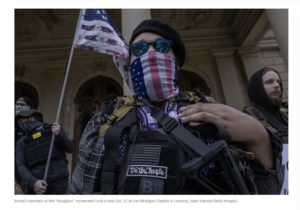 And there are gun owners and militia members who threaten to keep Trump in office. For example,  Mark Villalta, an attendee at Trumpstock in Arizona last October, confessed that he’s hoarding weapons just in case Trump loses. “Nothing less than a civil war would happen,” he told The New York Times. “I don’t believe in violence, but I’ll do what I got to do.”[i] These armed terrorists roam the streets emboldened by Michigan Judge Christopher Murray granting to pro-gun-rights groups the right to open carry of firearms at or within 100 feet of polling locations or absentee counting boards on Election Day.

Madison’s argues that removing the cause of factions would destroy liberty. Yet liberty cannot survive when Trump and his Republican factions stand by while 226,000 Americans die from a virus. Millions of public dollars transfer to the wealthy, including about $8.1 million in his pocket. And the economy drops by over 30 %, and unemployment sores to record highs.

Will liberty (our Republic) survive the Trump era? As the poll suggests, there is growing opposition to his reign, and there is a continuing and increasing support for Joe Biden. This trend indicates that many Americans want to end the Trump fracturing of America with a Biden presidency.

Can the voting majority overcome a well funded, armed anti-government faction? The next few weeks will give us an answer.

[i] Herndon, Astead W. “Nothing Less Than a Civil War’: These White Voters on the Far Right See Doom Without Trump.” https://www.nytimes.com/2019/12/28/us/politics/trump-2020-trumpstock.html

[i] Madison defined a faction as “a number of citizens whether amounting to a majority or minority of the whole, who are united and actuated by some common impulse of passion, or of interest, adverse to the rights of other citizens, or to the permanent and aggregate interests of the community.”

[ii] Dawson, Henry B., ed. The Federalist: A Collection of Essays, Written in Favor of the New Constitution, As Agreed Upon by the Federal Convention, September 17, 1787. New York: Charles Scribner, 1863.

[iv]   Hoffower, Hillary, The gap between the rich and the poor in the US has widened to a record high, and it mirrors the growth of ‘dynastic wealth’ at: https://www.businessinsider.com/us-income-inequality-record-high-generational-wealth-2019-9.

[v] Telford, Taylor, Income inequality in America is the highest it’s been since Census Bureau started tracking it, data shows at: https://www.washingtonpost.com/business/2019/09/26/income-inequality-america-highest-its-been-since-census-started-tracking-it-data-show/

[ix] Herndon, Astead W. “Nothing Less Than a Civil War’: These White Voters on the Far Right See Doom Without Trump.” https://www.nytimes.com/2019/12/28/us/politics/trump-2020-trumpstock.html

Hot on the heels of President Donald Trump (again) denying the severity of the COVID-19 pandemic during a press conference at his Las Vegas hotel and a subsequent rally in Bullhead City, Arizona, Gove
Read More

Mesquite, NV. A status hearing in the lawsuit by the owners of Paradise Canyon dba Wolf Creek Golf Course, against the Virgin Valley Water District (VVWD) is currently scheduled for August 7, before
Read More