“They’re all hustlers,” Donald Trump tells Michael Cohen, his longtime confidant and personal attorney, during a 2015 meeting in his office. [i]

Trump was referring to the attempt by Creflo Dollar, an Atlanta-based televangelist attempt to raise $60 million from his followers to purchase a Gulfstream G650 private jet.

In 2011 Trump thinking about a Presidential bid, met with a group of evangelical figures, including Dollar. During the meeting, Trump joined the group in prayer. 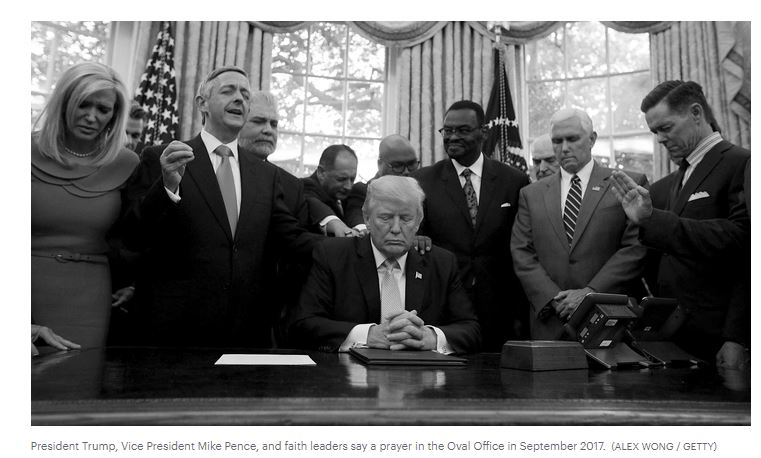 Trump casts himself as a conservative Christian and on Jan. 3, during a 75-minute rambling speech to an estimated 7,000 “supporters of faith” at the King Jesus International Ministry in Miami that:

“My administration will never stop fighting for Americans of faith,” Trump said after a freewheeling 75-minute speech. “We will restore the faith as the true foundation of American life.”

Trump hit the right buttons: abortion, freedoms of speech and religion, and what he claimed was a “crusade” from Democrats against religious tolerance.

Trump’s move to cement his relationship with the Charismatic Christian movement was enhanced on Monday when Senate Republicans voted to confirm Judge Barrett’s nomination just days before the Nov. 3 presidential election on a vote of  52-48.

Republican Sen. Susan Collins of Maine, who is in a tough reelection fight, was the only GOP senator to cross party lines and voted with Democrats against the nomination after expressing concerns that it’s too close to Election Day to consider a nominee.

Barrett is part of a charismatic lay community called People of Praise. According to the World Christian Database, which Gordon-Conwell Theological Seminary runs in Massachusetts, the group includes more than 500 million Pentecostals and charismatic Christians, including 195 million charismatic Catholics. Charismatic Christians differ from other Christians in that they adopt New Testament practices, including speaking in tongues, prophecy, and faith healing. Charismatic Catholics might also adopt more modern types of praise and worship band music with enthusiastic singing, clapping, and outstretched arms.

The president’s alliance with religious conservatives is premised on the contention that he takes them seriously, while Democrats hold them in disdain.  He fools not all religious groups. Consider the concerned members of the Church of Jesus Christ of Latter-day saints (LDS-Mormons).

A 2010 Gallup survey found that “Mormons are both the most Republican and the most conservative of any of the major religious groups in the U.S. today.”

To counter the drop, Trump sends his son, Donald Jr., to woo-back support of members of the LDS community, which in 2016 rejected the Republican ticket in unprecedented numbers.

Trump Jr. shows up at campaigns in Utah and other Mormon-heavy states. Earlier this year, he invoked Mormon pioneers in a call with reporters to describe his father’s “innovative spirit.” [ii]

According to two senior Utah Republicans, Don Jr. quotes from the Book of Mormon and leaves the impression that he may want to convert. [iii]

But McKay Coppins,  a member of the LDS community, sees Trump differently.  In a story written in the Atlantic, Coppins [iv] writes that Trump jokes about religious undergarments worn by devout members of the Church and blames Mitt Romney’s membership in it for his loss in the 2012 presidential election.

Coppins wrote, “I’ve been curious about the president’s opinion of Mormonism ever since I interviewed him in 2014 at Mar-a-Lago. During our conversation, Trump began to strenuously argue that Mitt Romney’s exotic faith had cost him the 2012 election.”

Many Mormons find Trump blasphemous, and the Church itself made thinly veiled statements condemning the candidate’s rhetoric on immigration and religious freedom.[v]

“I did think Trump in 2016 — there were questions among not just Mormons, but other communities of faith,” said Republican National Committee Chair Ronna McDaniel, who is LDS, in an interview. [vi]

However, McDaniel added that: “I think Mormons especially start looking at him as a different type of candidate than they did in 2016 because now he has a record,” McDaniel said, citing the president’s stances on abortion and religious liberty.

Yet leaders in the LDS community such as Sen. Mitt Romney (R-Utah) and former Arizona Republican Sen Jeff Flake have rejected Trump. Romey, the most prominent Mormon politician in the country has said he will not vote for Trump, though he has not endorsed Biden. And Flake, a longtime Trump critic, said he believes Biden will “approach the constitutional role [of president] with the reverence and dignity it deserves.”

Some Mormons in Arizona have formed a political action committee, named: “Arizona Republicans Who Believe in Treating Others With Respect.”

To date, that group has placed or is in the process of placing 45,950-yard signs or yard sign equivalents (billboards).

A significant number of the LDS community rejected Trump in 2016. If they vote to deny him the Presidency in 2020, they again send a message to everyone that truth counts, doing good work counts, and having genuine values count.

[vi] Thompson, Alex, and Barrón–López, Laura, “Mormons rejected Trump as blasphemous.  Now he likely can’t win without them,” at https://www.politico.com/news/2020/09/13/trump-biden-mormons-church-412234

This Week in Corona Scams: QAnon-sense

This Week in Corona Scams, it's looking extra scammy out there. With Labor Day fast approaching, we have some repeat offenders to check up on. And as always, QAnon tops that repeat offender list. Als
Read More

Latino Decisions just released a new national poll, along with surveys from select states. Unfortunately, we don’t have Nevada specific numbers today. Still, it’s important for us to check in with one
Read More

This Week in Corona Scams: Not Up for Debate

This Week in Corona Scams, Donald Trump said more weird stuff about COVID-19. Also, did you know Donald Trump and three of his adult children used to promote a MLM and run a MLM of their own? No reall
Read More