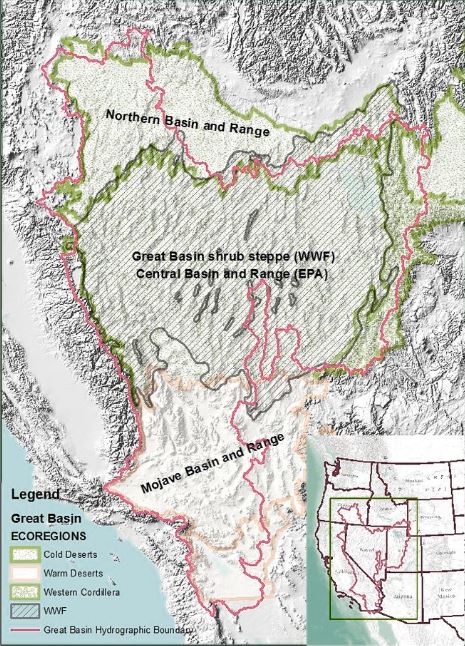 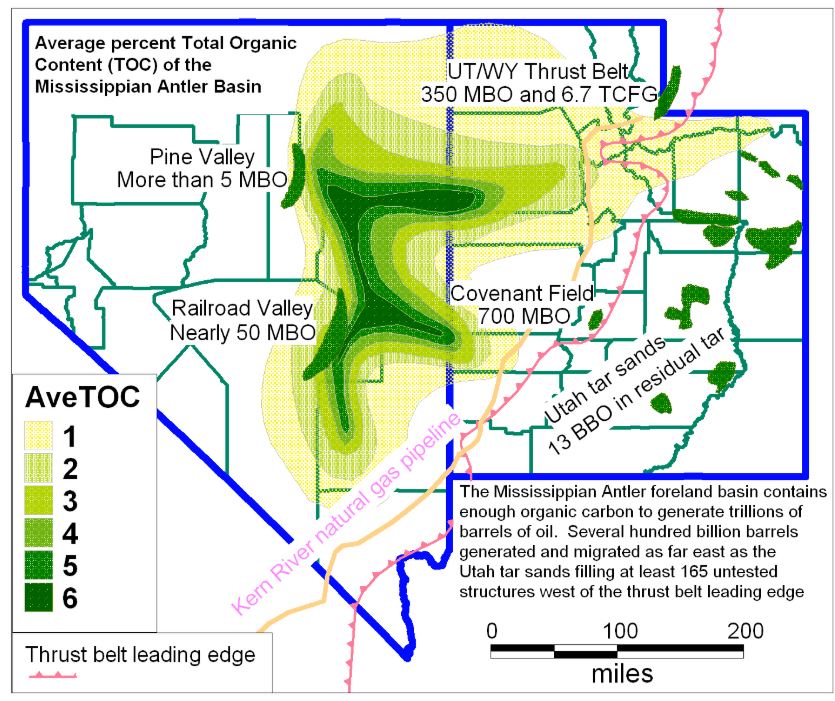 The structural map identifies at least 165 untested structures, possibly full of oil and gas, and covering 20 million acres between Antler Basin oil generating kitchen and the leading edge of the Cordillera thrust belt.

According to Chamberlain and Bhattacharjee, (2017, pg. 111), there is an unprecedented opportunity to acquire almost all the 10-year federal leases on the 165 structures. [i]

It is the current Bureau of Land Management (BLM) oil and gas auction process that provides the opportunity to potentially frack atop of fourteen hydrographic aquifers in the Great Basin.

Hydraulic fracturing requires the high-pressure injection of ‘fracing fluid’ (primarily water, containing sand or other proppants suspended with the aid of thickening agents) into a wellbore to create cracks in the deep-rock formations through which natural gas, petroleum, and brine will flow more freely.

The Nevada Division of Water Resources reports that 39.58 percent of water in 10 of the 14 aquifers listed in the BLM oil and gas lease areas remain  committed. That leaves 60.42 percent potentially available to provide fracking water. (table 1)

However, only nine of the 10 aquifers with excess water could actually  provide fracking water (table 1). It takes at least 1.8 million gallons of water (5.5 Acre Feet Yearly (AFY) to frack a well. [ii] Wells could be fracked 18 times thus taking 99 AFY from each well on an aquifer. The exception is aquifer 203 (Panaca Valley), with only 21.84 AFY remaining over that committed.

The Nevada Division of Water Resources reports that four of the aquifers are over-committed thus could not provide groundwater for fracking. (table 2).

It is important to note that the perennial yield [iii] data used in this analysis is derived from older United States Geological Survey (USGS) Reconnaissance Reports. On March 14, 2017, Jason King, the former Nevada Water Engineer, told Nevada’s legislative Committee on Natural Resources, Agriculture, and Mining in response to a question about perennial yield [iv], he said:

“.  . . Based on reconnaissance reports that the United States Geological Survey (USGS) performed in the 1950’s, 1960’s, and I believe most of them were done in the 1970’s. I would tell you that although they are old, we found them, by and large, to be very good and to be accurate.”

He continued: “We have many of those basins throughout the state where we have real live pump tests over time where we can see that those recon reports, for the most part, are good estimates of how much water is there. We have had some busts that have been identified, and we have updated many of those estimates over the past 20 years. We are always looking to update them with the latest and greatest science. I still believe that those old reports provide great value to us.”

Before drilling for oil and gas, The Bureau of Land Management (BLM) must complete a “meaningful” environmental review under the National Environmental Policy Act of 1969 (NEPA).

The NEPA requires Federal agencies to consider the potential environmental consequences of their proposed action, and any reasonable alternatives, before deciding whether and in what form to take action. Complying with NEPA can take these forms:

NEPA analyses must be prepared using an interdisciplinary approach, and the disciplines of the preparers must be appropriate to the scope of the analysis and to the issues identified in the scoping process (40 C.F.R. § 1502.6). [v]

One feature of the guidelines is an emphasis on the use of “determinations of NEPA adequacy” (DNA) for oil and gas leasing, which allows the agency to forgo fresh environmental review when it already has studies that cover a new proposal.

Under this adjustment the BLM can proceed without an updated environmental impact plan if they determine that action has already been adequately analyzed and is in conformance with land use plans.

Occasionally, the BLM has funds to distribute to non-Federal entities to perform NEPA work on lands not administered by the BLM. If the BLM distributes the funds according to a predetermined formula or through a State clearing house for subsequent distribution to projects not individually identified, then the NEPA is not triggered.

Whether or not these or other funds could be used to determine the impact of oil and gas leasing on Nevada aquifers is something for consideration. This is especially timely since, on June 9, 2017, Brian Sandoval signed into law Senate Bill 47 (NRS 533.024). That legislation required the State Water Engineer to prepare a “water budget” for groundwater and manage that water source “conjunctively” with surface water.

[i] Chamberlain, Alan K., Bhattacharjee, Kumar, , The Great Basin Shares Are Not Just Organically Rich As Other Thales, They Are Many Times Thicker.”http://digital.ogfj.com/ogfj/201701?article_id=1265516&pg=28#pg28

[iii] If ground water is considered by itself, the yield is considered Perennial. As defined by Glancy and Van Denburgh (1969, p. 62) that is “… the maximum amount of natural discharge that can be salvaged each year over the long term by pumping without bringing about some undesired result”

[iv] The amount of usable water from a groundwater aquifer that can be economically withdrawn and consumed each year for an indefinite period. It cannot exceed the natural recharge to the aquifer and ultimately is limited to maximum amount of discharge that can be utilized for beneficial use.

[v] The requirement for an interdisciplinary approach is met when those  preparing studies consult with all appropriate sources for the analysis of affected resources. This may include staff from other BLM offices or other Federal or non-Federal agencies, as needed, to provide a rational basis for decision-making.

How many times have we heard this after another mass shooting: “Why don’t we talk about mental health?” Even in the three years since we first launched this site, I’ve lost count of all the times oppo
Read More 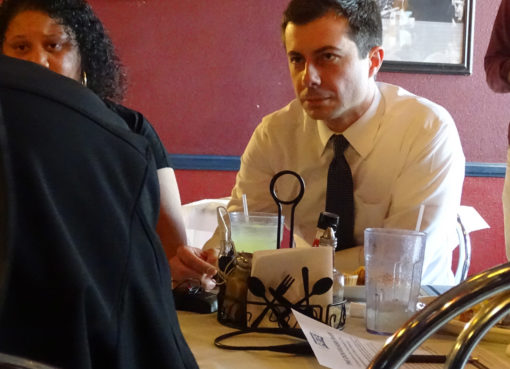