It is only a matter of time until portions of the Great Basin in Nevada are open to fracking. 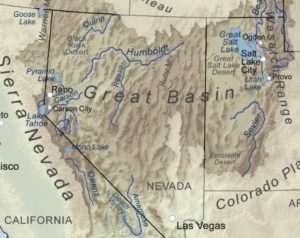 Federal taxpayers own significant oil and natural gas reserves on federal lands in Nevada with more land offered for lease at competitive auctions than in any other state except Alaska. That is 2.7 million acres between 2013 and 2018.

Only 11% of the parcels sold competitively in the last five years. In 2009 some 70% of the nationwide total for 2.04 million acres of public land were awarded under Nevada’s non- competitive leasing process. At the end of 2018, only 36 leases covering 2.7% of leased acres were producing. [i]And in 2019, only 5 companies were producing. They include:

The BLM generated a record $1.1 billion from 28 oil and gas lease sales in Fiscal Year (FY) 2018. The oil and gas industry on public lands in Nevada contributed $3.1 million in total economic output in FY 2019. [iii]

By statute, the Bureau of Land Management (BLM) is required to offer quarterly oil and gas lease sales of available federal lands. These lease[iv] sales represent parcels that have been through environmental review and public comment.

The Great Basin contains oil shales up to 900 feet thick.[vi] As such, they are as organically rich as the other America shales. [vii]

Ordovician Vinini [viii]shales found in the hanging wall of the Central Nevada Roberts Mountain thrust fault are thousands of feet thick yet good oil and gas shows in some wells and are organically rich enough to retort (distill) oil. [[ix]] 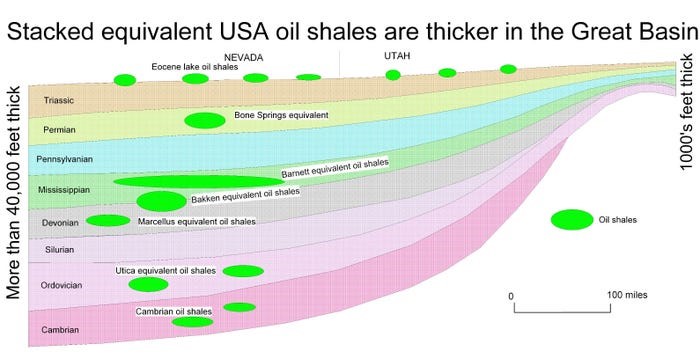 Mississippian [[x]] Antler basin oil shales, sometimes called Chainman shale, make up about five thousand feet of Antler clastics (fragments), which generally produce good oil and gas in wells. These fragments are related to several seeps and surface oil occurrences and are believed to be the source for the fifty million barrels of oil produced in Railroad Valley and the seven hundred-million-barrel Covenant field in central Utah. 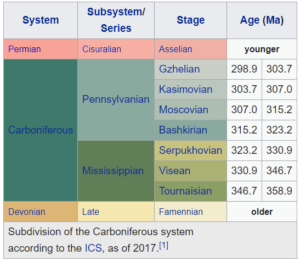 However, the Great Basin Permian oil shales have not been drilled and/or studied adequately. They are hundreds of feet thick in some sections and nearly always produce a strong hydrocarbon odor when freshly broken.

Some of that oil generated soon after thrust loading in the Late Cretaceous and Early Tertiary. The hydrocarbons then migrated through thousands of feet of subthrust Jurassic sandstone to oil traps along the leading edge of the western North American Cordillera thrust belt in central and northern Nevada and onto the giant folds in the Colorado Plateau of eastern Utah. [[xi]] 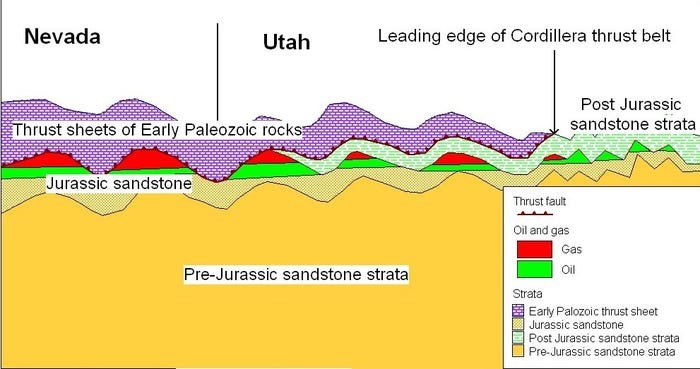 Subsequent erosion by the Colorado River removed the structural seals allowing most of the hydrocarbons to escape leaving only a residue of thirteen billion barrels of oil in the Utah tar sands. [xii]

As oil migrated from central Nevada to Utah, it filled up each fold to spill point before flowing over to the next structure to the east. Each of the structures could contain a billion or more barrels of oil or oil equivalent. [xiii]

Erosion by the Colorado River has exposed thousands of feet of subthrust Jurassic sandstone that forms the cores of mountains in the Las Vegas area. Two wells, penetrating thousands of feet of Precambrian and/or Early Paleozoic rocks confirm that subthrust Mesozoic rocks occur below the thrust sheets west of the leading edge of the thrust belt. These pieces of evidence suggest that thick subthrust Mesozoic sandstones may also core some, if not many, of the 165 untested structures north of the Colorado River. The subthrust sandstones are the reservoir rock that has already produced trillions of cubic feet of gas and hundreds of millions of barrels of oil along the leading edge of the thrust belt.[xiv]

[i] Taxpayers for Common Sense, “Gaming the System, How Federal Land Management and Oil and Gas Policies Fail Taxpayers in Nevada July 30, 2019 at: https://www.taxpayer.net/energy-natural-resources/gaming-the-system/

[iv] The lease is a contract to explore and develop any potential oil and gas. A lease may earn an extension if the lessee establishes production; otherwise the lessee pays an annual rental fee.

[vi] In comparison Bakken shale in North Dakota is only 150 feet thick or less.

[viii] The Vinini Formation is a marine, deep-water, sedimentary deposit of Ordovician to Early Silurian age in Nevada, at: https://en.wikipedia.org/wiki/Vinini_Formation

[x] Mississippian t is the earliest/lowermost of two subperiods of the Carboniferous period lasting from roughly 358.9 to 323.2 million years ago at: https://en.wikipedia.org/wiki/Mississippian_(geology)

[xi] Chambeerlain, Alan, “Nevada might be sitting on one of the biggest undiscovered oil fields”, athttps://www.businessinsider.com/nevada-might-be-sitting-one-one-of-the-biggest-undiscovered-oil-fields-2016-10?amp;utm_medium=referral

“It’s the Fight for Justice”: Bernie Sanders Returns to Nevada to Relaunch His “Political Revolution”

He came. He saw. For a moment, it seemed like he was coming from behind to conquer the caucus and take his “political revolution” to the next level. But when U.S. Senator Bernie Sanders (I-Vermont) lo
Read More

Here We Go Again: A Guide to Unspinning the Spin on Trump’s Race-baiting

Over the weekend, President Donald Trump (once again) made headlines with his penchant for bigotry, demagoguery, and endless pursuit of money and power. Thanks to the U.S. Supreme Court's Republican-a
Read More

On Monday, we discussed the curious case of Governor Brian Sandoval (R) and the Republican Party that's ditched him. Today we need to talk a little more about the person who's leading the party now, a
Read More