On June 15, 2020, Tim Wilson, the Nevada State Water Engineer, issued order 1309. That order held that the public’s interest in the Moapa dace had equal rights to those holding decreed water rights along the Muddy River. [i]  And the order limited groundwater pumping on the Lower White River Flow System (LWRFS) to 8,000 Acre Feet Annually (AFA) from an estimated underground yield of 48,081.18 AFA. The average perennial yield for the LWRFS ranged from 1,014.29 AFA to 8,442.86 AFA. 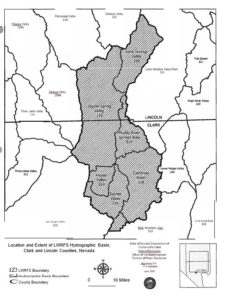 Wilson’s 1309 order is the latest in legal wrangling pitting the public’s interest against decreed rights holders and profit seekers.

Determining the amount of groundwater in Eastern and Southern Nevada goes back to at least 1985.  In 1985, the Nevada legislature, in collaboration with the Federal Government, authorized a study and testing of the carbonate-rock aquifer system in what they eventually branded as the LWRFS Hydrographic Basin. The reviews intended to address the following fundamental concerns:

For Wilson, the Endanger Species Act that protects the Moapa dace (Moapa coriacea) represents the public interest. [i]

The private interests of the Coyote Springs Investment (CSI) complicated the issue. [ii] That group initially planned to cover 43,000 acres (17,000 ha) or 65 square miles (170 km2) with homes and a golf course. Developers did develop a Jack Nicklaus designed golf course. However, they put additional work on hold due to the economic recession in the United States and complex legal issues.

During LWRFS hearings, representatives for CSI argued that groundwater available for extraction from that basin might be up to 30,630 AFA. However, most other experts disagreed that pumping to that extent could occur without causing harm to the Moapa dace or conflict with 1920 Muddy River decree rights.

The public interest also remains under scrutiny in the Walker Lake case.

Mineral County completely contains Walker Lake, and the health of Walker Lake directly and dramatically affect the quality of life, general welfare, and the economic, aesthetic, and recreational wellbeing of the County itself and its residents.

The drawdown in Walker Lake goes back to historical arguments over water diversions codified in the Walker River Decree[iv] , which favored agriculture and livestock watering over the health of the Lake, its inhabitants, and Native American rights.

Settlers diverted water from the Walker River and its tributaries for profitable agriculture and livestock production beginning in the mid-19th century. These diversions contributed to a drop of approximately 181 ft (55 m) between 1882 and 2016. By June 2016, the lake level was 3,909 feet above sea level, which is the lowest lake elevation since measurement began in 1882.[v]

The decline in lake water resulted in higher concentrations of total dissolved solids (TDS) in amounts well above the lethal limit for most of the native fish species.  Lahontan cutthroat trout no longer occur in the Lake, and recent work by researchers indicates that the Lake’s tui chub have declined dramatically. The decline of the Lake’s fishery has an impact on the species of birds using the Lake.

By 2009, the town of Hawthorne canceled its Loon Festival because the Lake, once a major stopover point for migratory loons, could no longer provide enough chub and other small fish to attract many loons.

Attorneys for Mineral County intervened in the Walker Decree proceedings in 1994 to enforce the State of Nevada’s public trust doctrine. They argue that the doctrine obliges the State to maintain minimum inflows from the Walker River system into Walker Lake to sustain Walker Lake’s environmental, wildlife, recreational, and aesthetic values.[i]

County’s public trust claim is a continuation of litigation over water rights on the Walker River system that commenced in 1924 when upstream users prevented water from reaching the Walker River Paiute Reservation. This conduct prompted the United States to sue to determine a water right for the reservation and the related rights to water of parties in Nevada and California.

Plaintiffs’ attorneys argue that historically Nevada state officials have failed to fulfill the State’s fiduciary obligation to protect Walker Lake under the public trust doctrine. And Walker Lake has been progressively and severely degraded to the point where several of the Lake’s core public trust uses, and values have been lost, at least, for the time being.

On Tuesday, September September 18, 2019, the Virgin Valley Water Board (VVWB)  voted to join against Mineral County and its supporters in the case. According to VVWB attorney Bo Bingham: “We think prior appropriations should supersede the public trust doctrine.” Prior appropriations are code for acquiring Virgin Valley water shares at outrageous prices. Click here for additional information about their purchasing practice.

The Nevada Supreme Court in Carson City heard oral argument in the Walker Lake Case on March 3.  The results have are yet unposted.

[i] This 4 inch species is endemic to Muddy (Moapa) River upon which individuals hold senior water rights granted under the 1920 Muddy River Decree.

[ii] Coyote Springs is located between U.S. Route 93 on the west and the Meadow Valley Mountains to the east, a drive of less than an hour from the City of Las Vegas and the Las Vegas Strip. The Coyote Springs valley is bisected by several major washes including the Pahrangat Wash and the Kane Springs Wash.

[iii] The Walker river in west-central Nevada is fed principally by snowmelt from the Sierra Nevada mountains of California, it drains an arid portion of the Great Basin southeast of Reno and flows into the endorheic basin of Walker Lake.

Oh, What a Night: Notes from the 2019 Las Vegas Pride Parade

Last night, Las Vegas celebrated both National Coming Out Day and Pride Weekend with a very special night-time parade. What made the night even more special were all the people who showed up. We spoke
Read More

Today, some 19 Democratic presidential candidates are speaking with public sector workers from across the nation and answering their questions (and a couple of reporters’) on how exactly they plan to
Read More