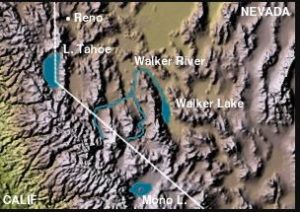 At 11 a.m. on March 3, the Nevada Supreme Court in Carson City will hear oral argument in what is commonly referred to as “The Walker Lake Case.”[i],[ii] 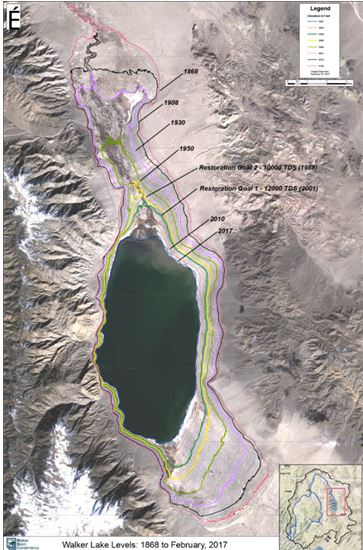 The case deals with two issues governing how water is management by the State. 1) “Does the public trust doctrine apply to water rights already adjudicated and settled under the doctrine of prior appropriation and, if so, to what extent?”; and (2) “If the public trust doctrine applies and allows for reallocation of rights settled under the doctrine of prior appropriation, does the abrogation of such adjudicated or vested rights constitute a “taking” under the Nevada Constitution requiring payment of just compensation?”

Mineral County’s public trust claim is a continuation of litigation over water rights on the Walker River system that commenced in 1924 when upstream users prevented water from reaching the Walker River Paiute Reservation. This conduct prompted the United States to sue to determine a water right for the reservation and the relative rights to water of parties in Nevada and California.

Plaintiffs’ attorneys argue that historically Nevada state officials have failed to fulfill the State’s fiduciary obligation to protect Walker Lake under the public trust doctrine. And Walker Lake has been progressively and severely degraded to the point where several of the Lake’s core public trust uses, and values have been lost, at least, for the time being.

The public trust of water is undisputed. [v]Further, having water permits [vested or otherwise] does not imply ownership. It is merely the ability to enjoy the water for beneficial use.  Therefore, Plaintiffs argue that those “rights” are subject to the public trust,” which at all times forms the outer boundaries of permissible government action concerning public trust resources. In this manner, then, the public trust doctrine operates simultaneously with the system of prior appropriation.”

The attorneys suggest that “If the current law governing the Nevada water engineer does not clearly direct the Nevada State Water Engineer to continuously consider the public’s interest in Nevada’s natural water resources, then the law is deficient.” They argue that “It is then appropriate, if not our constitutional duty, to expressly reaffirm the engineer’s continuing responsibility as a public trustee to allocate and supervise water rights so that the appropriations do not substantially impair the public interest in the lands and waters remaining.”

This case raises a significant and novel issue of western water law by considering whether the public trust doctrine can authorize modification of a water rights decree and reallocation of water rights adjudicated in the decree.

[ii] The issue came before the Supreme Court as the result of two Ninth Circuit Court of Appeals orders which certified these two questions of Nevada state law to the Supreme Court for decision pursuant to NRAP 5.

[v]Under Nevada law (NRS 533.0250 all “[t]he waters of all sources of water supply within the boundaries of the State (of Nevada) whether above or beneath the surface of the ground, belongs to the public.”

Tales from #NVLeg: Notes on the 81st Session of the Nevada Legislature

The 81st Session of the Nevada Legislature ends at midnight tonight. So what exactly have they been doing this spring, and what do they have to show for it? On this final day of the session, we take s
Read More

When Is a Law Not Legal? A Look Inside the Lawsuit Over Nevada’s Background Checks Law