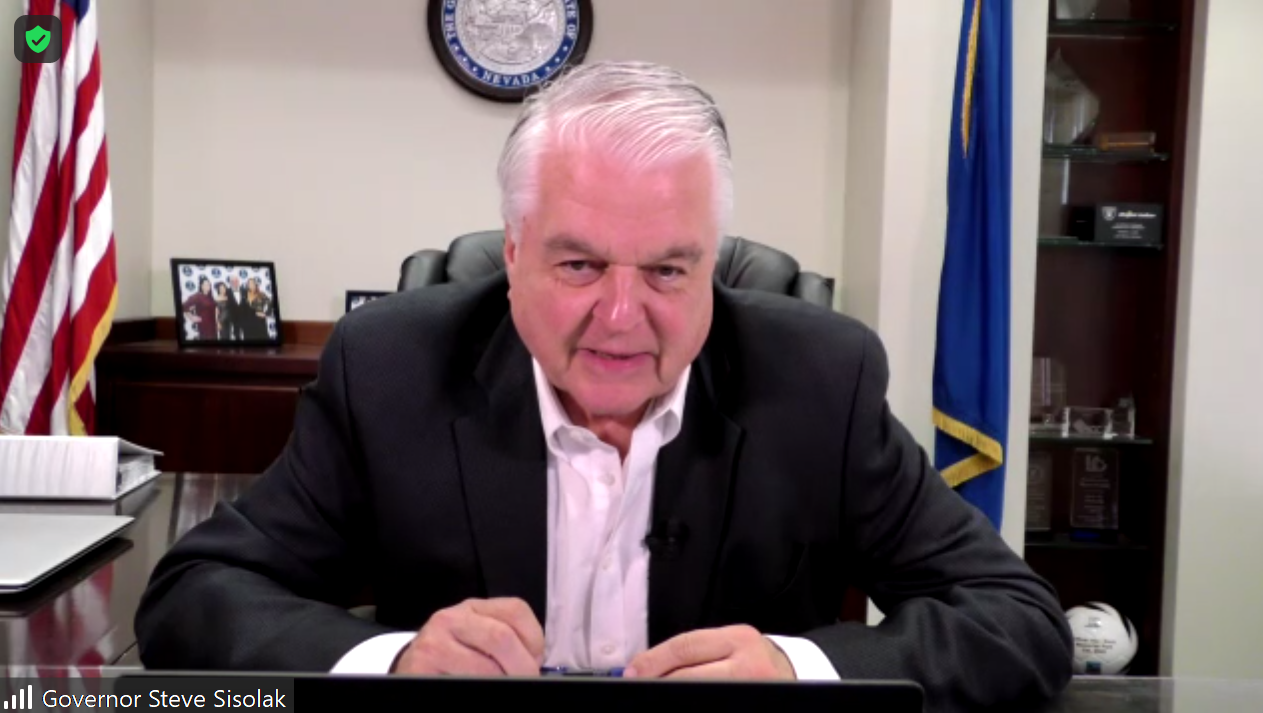 As President Joe Biden and Congressional Democratic leaders continue their efforts to salvage their Build Back Better and “bipartisan” infrastructure bills, Governor Steve Sisolak (D) and some of his fellow Democratic governors weighed in on the debate. They also spoke about how Build Back Better and the “bipartisan bill” can help them boost their respective states’ climate action programs.

Why are we still talking about Congress’ Build Back Better fight? Here are some clues.

As we mentioned last week, the United Nations’ COP26 climate change summit will kick off in Glasgow next month. Just like the Kyoto 1997, Copenhagen 2009, and Paris 2015 climate summits, America’s set to enter into Glasgow 2021 amidst global doubts over whether we can actually practice what we preach on the world stage. Just like then President Barack Obama going to Copenhagen in 2009, President Joe Biden’s participation at Glasgow will probably be subject to a split screen shared with Congress’ struggle to deliver any legislation with some sort of national climate plan. And just like Paris 2015, Biden will have to prove to the rest of the world that America remains a credible partner despite our repeated failures thus far to meet our stated climate action goals.

However unlike most of the prior climate summits, Biden can at least point to some levels of climate action. There’s just a catch – The bulk of the action has been at the state and local levels. Here in Nevada, the state has a comprehensive climate initiative that includes a 50% by 2030 renewable portfolio standard (RPS), continuing investment in renewable energy generation and renewable supporting power infrastructure, and support for cleaner vehicle standards. Next door, California has consistently positioned itself as a state-level climate leader with a suite of policies including – a 60% by 2030 and 100% by 2045 RPS, the overall carbon emissions reduction goal of 40% below 1990 levels by 2030, sustainable transportation infrastructure investment, and a comprehensive climate resiliency strategy across the public sector.

However, there’s another catch: According to Nevada’s own climate initiative records, we’re already falling short of our 2025 and 2030 RPS benchmarks. Next door in California, they’re also failing to meet their own lofty goals as their cap-and-trade based emissions control program fails to lower overall carbon pollution, their “hydrogen highway” appears to be a road to nowhere, and they take their time in closing fossil fuel trouble spots like the Aliso Canyon natural gas storage facility. And despite the efforts of our two states and other state and municipal policymakers, Our World in Data shows that the U.S. overall has only cut carbon emissions 2.4% since the 2015 Paris Summit, and that our national carbon emissions remain 2.9% above 1990 baseline levels. To make this long story shorter, localized action can only take us so far without a national climate action plan.

As we’ve previously noted, the Build Back Better reconciliation package may very well mark America’s last chance to enact some sort of national climate change strategy while we still have a window of opportunity to prevent cataclysmic levels of ecological damage and destruction. Today, Sisolak and several of his fellow Democratic governors held a virtual panel discussion with former Michigan Governor and current U.S. Energy Secretary Jennifer Granholm to promote Build Back Better and offer some kind of hope on America’s ability to kickstart our climate action.

“We are open to any help we can get from the federal government.” 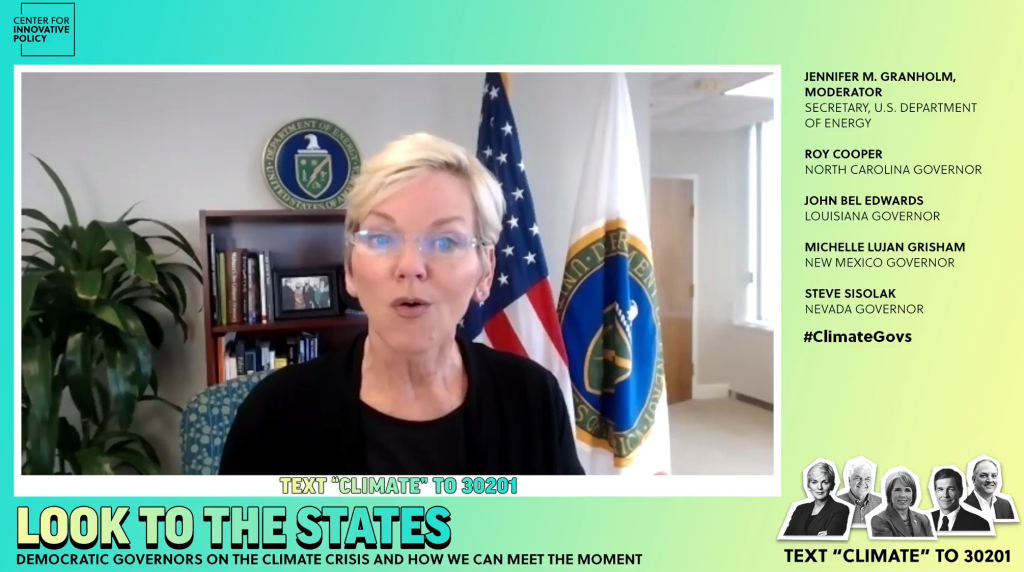 During today’s program, Secretary Granholm nearly went there herself: “So much is on the line. […] Our ability to compete and lead in the 21st century economy is on the line. Our ability to prevent the worst calamities of climate change is on the line.” She continued, “The window for bold federal climate action is open right now. There’s no guarantee that the window will stay open for much longer.”

Though the Governors didn’t nitpick over too many federal infrastructure legislative details – particularly since Congressional Democrats have yet to finalize a Build Back Better agreement – they laid some markers on what they want and need from it. For starters, Sisolak made clear, “We are open to any help we can get from the federal government.” Granholm indicated that the Biden administration hopes to obtain block grant funding to distribute to states, and she hinted at their goal to create additional funding streams – such as Justice40 to deliver at least 40% of overall climate investment benefits to historically marginalized communities.

Louisiana Governor John Bel Edwards (D) did get more specific when he stated, “We need more money for coastal rehabilitation. We need storm surge barriers. Without it, those hurricanes reach our population centers with a lot more force.” The “bipartisan bill” includes funding for environmental rehabilitation programs, though the White House and Congressional progressives expect the bulk of their climate action policies and funding to emanate from Build Back Better.

“When you decarbonize each sector, we signal to workers that there’s this huge energy future in tackling climate change.”

Thus far, two of the greatest shortcomings of America’s (lack of a) climate action plan are the absence of any type of carbon pricing mechanism and the lack of an enforceable requirement to repeal and replace fossil fuels with renewable energy. Biden and Congressional Democratic leaders seek to abide by Congress’ reconciliation rules and sidestep the arguments among environmentalists over the effectiveness of carbon taxes and cap-and-trade regimes by setting up a federal Clean Electricity Performance Program (CEPP) to utilize federal dollars to reward utility companies that switch from fossil fuels to clean power.

Though New Mexico has yet to develop a comprehensive carbon pricing system, Governor Michelle Lujan Grisham (D) noted, “New Mexico already has tax incentives [for renewables]. If you don’t have incentives, you create disincentives for states [to act on climate change]. We need sustainability in addition to clear infrastructure investments.”

Lujan Grisham also sought to debunk climate deniers’ talking points about climate action allegedly harming the economy: “When you decarbonize each sector, we signal to workers that there’s this huge energy future in tackling climate change.” North Carolina Governor Roy Cooper (D) concurred as he pointed out his state’s burgeoning clean power industry: “This is an economic boon. Get on the train. These are the jobs of today.”

“We have a lot of wide open land that’s available for solar. We need to get it on the grid so more Americans can use it.”

One of the most frustrating aspects of covering Congress’ fight over Build Back Better is national media pundits focusing so strongly on top line “red lines” and inside-the-Capitol personal conflicts that the actual purpose of this legislation often gets lost amidst the “horse race” style media coverage. During the Democratic governors’ event, the governors sought to redirect the conversation back to that actual purpose as they described their states’ respective climate programs that they hope to expand with new federal support.

And for Sisolak here in Nevada, that means more investments in research and development like UNLV’s renewable energy programs, as well as turbocharging Nevada’s current efforts to upgrade our transmission lines and storage capacity in order to take fuller advantage of our renewable energy generation capability. Or as Sisolak put it, “We have a lot of wide open land that’s available for solar. We need to get it on the grid so more Americans can use it.”

They Can’t Breathe: Notes on the Murder of George Floyd and the Black Lives Matter Protests

Moments ago, Governor Steve Sisolak (D) admitted, “This is our new normal.” Indeed, as COVID-19 continues to rage across Nevada and the U.S., Sisolak promised a new heightened enforcement system to be
Read More