For over two years, we’ve noticed as the full reauthorization of the Violence Against Women Act (VAWA) has languished in Congress – more specifically, the U.S. Senate. Why has this legislation designed to help victims and survivors of domestic and sexual violence, legislation that once regularly passed with rock-solid bipartisan support, become so “controversial” in recent years? And how can we break this cycle of gridlock on something that should be anything but “controversial”?

First, let’s review the history of the Violence Against Women Act.

As we noted last August, the Violence Against Women Act was signed into law in 1994. Though then President Bill Clinton and then U.S. Senator Joe Biden (D-Delaware) hailed VAWA as a major accomplishment, the original bill passed with a significant amount of bipartisanship. Though some Republicans sought to defund VAWA programs the following year, they ultimately relented under public backlash to the 1995-96 government shutdown.

In 2000, Republicans did get to see VAWA scaled back somewhat thanks to the U.S. Supreme Court’s 5-4 vote in United States v. Morrison to strike down VAWA’s provision that would have allowed victims to sue their attackers in federal court. Nonetheless, the Violence Against Women Act was reauthorized and enhanced in 2000 and 2005 with robust bipartisan support. The 2000 reauthorization created a legal assistance program for victims and survivors, and it established immigration visas to help human trafficking victims escape abuse. The 2005 reauthorization added a dedicated funding stream for rape crisis centers, along with further resources to help immigrant victims and survivors, resources for victims of stalking, aid for victims and survivors at risk of eviction, and investment in abuse prevention strategies.

Though there was little controversy over the 2000 and 2005 reauthorizations that added more resources to help more victims and survivors, the next effort to reauthorize the Violence Against Women Act turned into a partisan battlefield in 2011, when then President Barack Obama and Democrats in Congress sought to continue programs aiding immigrant victims and survivors and add new resources for Native American and LGBTQ+ victims and survivors, such as empowering Native American tribal courts to try domestic violence cases that occur on tribal lands regardless of whether the criminal defendants are themselves tribal community residents. It took Obama’s successful 2012 reelection and sustained unity among Congressional Democrats for enough House Republicans to relent, and for the Violence Against Women Act of 2013 to become law.

As we’ve previously discussed, VAWA again collided with a federal government shutdown in December 2018. Yet even though the funding deal that Democratic and Republican leaders brokered to fully reopen the government in January 2019 included a temporary VAWA extension, that soon expired, and the Violence Against Women Act Reauthorization Act has been languishing ever since. This VAWA reauthorization (H.R. 1620) passed the House again on March 17 on a 244-172 vote (Reps. Dina Titus [D-Las Vegas], Susie Lee [D-Las Vegas], and Steven Horsford [D-North Las Vegas] all voted aye, while Rep. Mark Amodei [R-Carson City] voted nay), but it’s once more stuck in the U.S. Senate.

Why is the Violence Against Women Act still needed?

When Rep. Susie Lee held a virtual roundtable with local advocates for victims and survivors last September, they explained VAWA’s critical role in funding non-profit organizations’ and local governments’ programs to assist victims and survivors, and they noted that VAWA can and should go further in providing more funding to where they money is most needed. During another virtual press event with Senator Catherine Cortez Masto (D) last week, advocates again warned of the consequences of allowing VAWA reauthorization to collect any more dust in the Senate.

According to Danielle Staple of The Rape Crisis Center, “We have been waiting with bated breath for VAWA reauthorization. Our funding will be affected if VAWA is not reauthorized.” She then added, “The thought of not having these services available for our communities, the loss of these services will be so detrimental.”

Ilse Knecht, Director of Policy and Advocacy at the Joyful Heart Foundation, also chimed in to explain some more of what VAWA entails, including an additional $40 million for multilingual and culturally competent emergency aid and long-term services for victims and survivors, emergency and longer-term housing aid for victims and survivors, $110 million for programs meant to prevent future sexual assaults, and law enforcement training to better equip local police to address domestic and sexual violence cases. As Knecht noted, “It’s such broad legislation, and it touches so many areas of law enforcement and aid for our communities.”

What else needs to be done to help victims and survivors? (Hint: The backlog still exists.)

Cortez Masto primarily used last Thursday’s virtual briefing to highlight her bill with Senator Pat Toomey (R-Pennsylvania), the Fairness for Rape Kit Backlog Survivors Act. Even with advances in forensic technology, fewer than 1% of reported rapes result in criminal conviction. This bill would build on 2019’s Debbie Smith Act, which provided funding to help Nevada and other states clear their rape kit backlogs, by allowing sexual assault victims and survivors to apply for Victims of Crime Act benefits and services regardless of state deadlines, and by giving states a three year deadline to update their laws and protocols for processing rape kits and prosecuting crimes of sexual violence.

According to Cortez Masto, “This is about making sure that law enforcement can pursue and investigate all forms of evidence available.” She added, “These deadlines are unfair to rape victims because of the backlog, and because of the time it takes to process rape kits.”

As we’ve seen with high-profile criminal cases like Bill Cosby’s, and as we’ve seen in thousands more less-publicized sexual assault cases across the U.S., we have this problem where untested rape kits pile up, victims are told to wait while police departments decide how (or even if) to proceed, and then their cases essentially become disqualified once they hit the statute of limitations.

How might the Violence Against Women Act overcome intransigent opposition? (Hint: Check the Senate cloakroom.)

In case anyone still wonders why the current VAWA reauthorization has stalled in the U.S. Senate, here’s what’s going down: It renews the expanded protections for immigrant, Native American, and LGBTQ+ victims and survivors that came online with prior reauthorizations, and it includes a new provision to close the “boyfriend loophole” and bar anyone convicted of stalking and/or domestic violence (including misdemeanor offenses, and including those who were not married to their victims) from obtaining firearms, as well as a new grant program to direct more federal funds to assist LGBTQ+ victims and survivors. Senate Republicans have primarily cited H.R. 1620’s “boyfriend loophole” provision (and really, the NRA’s die-hard opposition to any and all gun violence prevention bills) as a hard no for them, and some House Republicans have already resorted to blatant transphobia to try to derail the bill.

While Senate Democratic leaders have vowed to deliver this VAWA reauthorization to President Joe Biden to sign, here’s where we return to “Infrastructure Week”. So long as a critical mass of Congressional Republicans see more political upside in “culture war” fights over transgender civil rights and gun violence prevention over “good faith” negotiations with Democrats, they will probably choose to continue stalling the Violence Against Women Act in the Senate while heaping praise on individuals like former President Donald Trump who themselves have terrible track records on this very matter.

Good to hear Schumer and @WHCOS set August as the deadline for passing HR1, which will require reform. The April approach was to let the easier, bipartisan stuff go first, which means we're headed into May with zero filibusters. There are 49 legislative days left before August. https://t.co/1Sa7FGCAU5

When asked about the Senate gridlock over two additional House-passed bills (H.R. 8 and H.R. 1446) to strengthen federal background checks law, Cortez Masto declared, “This, to me, is something that should be nonpartisan. We passed this here in Nevada. It’s something we should do.” And when asked about VAWA, she flat-out said, “VAWA reauthorization must occur. This should not be partisan.”

As much as we don’t want to see something like this as “partisan”, this is the reality we’re stuck in. As hard as it is for some on Capitol Hill to fathom the notion of needing filibuster reform just to pass legislation like reauthorization of the Violence Against Women Act, this may very well be the kind of conversation that Democrats need to advance just to break the gridlock and deliver results for the victims and survivors who are waiting far too long for the help they need.

If you or someone you know is facing a major life crisis and struggling with thoughts of suicide, help is available. The National Suicide Prevention Lifeline is always there at 1-800-273-8255 (TALK). So is the Crisis Text Line, where you can start a conversation with a volunteer counselor by texting “START” to 741741. For LGBTQ+ youth in need of immediate help, the Trevor Project has a 24/7 hotline at 1-866-488-7386 and a text option (text “START” to 678678) available. And if you know anyone who’s currently experiencing domestic and/or sexual violence, the Nevada Coalition to End Domestic and Sexual Violence has a list of resources available across the state. And if you want to do more to help, check out the Nevada Coalition’s action page for ideas on getting more involved.

“I Believed He Was Going to Rape Me”: Dr. Christine Blasey Ford and Brett Kavanaugh Testify as Senate Weighs Trump’s Supreme Court Nomination 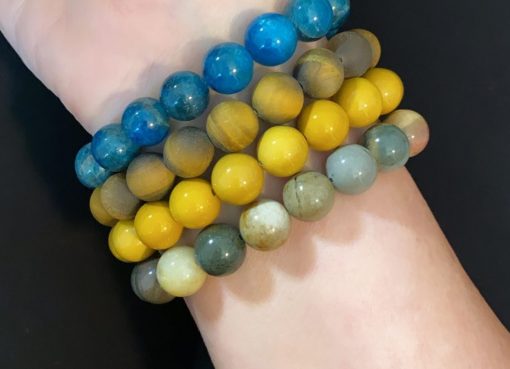 This Week in Corona Scams: BS Beads and BS Overload

This Week in Corona Scams, we revisit the seemingly never-ending saga of “BS Beads”. Why, you ask? Though this may seem like a small-time rip-off, the “BS Beads” melodrama really illuminates the large
Read More

Over 30 years ago, Congress passed what’s since become known on this side of the Rocky Mountains as the “Screw Nevada” bill that designates Yucca Mountain as an official repository site for nuclear wa
Read More