Last Saturday, the U.S. Senate voted 57-43 to convict former President Donald Trump on one impeachment article of inciting the January 6 Attack on the U.S. Capitol. But because 57 falls short of the ⅔ needed for conviction, Trump essentially won acquittal thanks to his stalwart support among his fellow Republicans.

Meanwhile, the flood of online disinformation that Trump weaponized against this very Congress remains as torrential as ever. Though the impeachment itself has concluded, the underlying threat to our democracy remains quite alive and kicking.

First, one more look at what happened in Congress last Saturday

After participating in this week’s impeachment trial, and assessing the evidence presented by both parties, I voted to convict former President Donald J. Trump for his role in inciting an insurrection on the United States Capitol.

Those rioters could have burned down the Capitol and the chilling effect on democracy not just in the US, but worldwide, would be the same as what we've seen today

Like Donald Trump’s first impeachment, the final verdict amounted to letting Trump off the hook. But unlike Trump’s first impeachment, seven Republican Senators crossed over to vote with all 50 Democrats in favor of conviction in this second impeachment trial that concluded last Saturday. In her statement following the Senate’s final vote, U.S. Senator Jacky Rosen (D) noted, “The Constitution requires two-thirds of the Senate to vote to convict. Although we did not reach that threshold, a majority of my colleagues voted to convict former President Trump, the most bipartisan vote to convict in a presidential impeachment trial in history.”

In her statement following her vote for conviction, U.S. Senator Catherine Cortez Masto (D) offered this summary of why this mattered: “When his supporters attacked, as he called on them to do, he violated his responsibility as president and commander-in-chief to preserve, protect, and defend the Constitution and our Republic. It was obvious that Donald Trump was willing to use almost every measure at his disposal to gain and retain power, even if it meant overturning a free and fair election through violence. For that reason, I voted to convict Donald Trump of inciting an insurrection.”

As straightforward as Rosen’s and Cortez Masto’s reasoning seems to be, how many Nevadans and other Americans actually know and understand what they’re talking about? As we’ve been warning for nearly three years, QAnon and other online conspiracy movements have distorted reality for millions of Americans to the point where they’re justifying the kind of violence that we witnessed on January 6.

Yes, they can do both QAnon and “college-educated voters”.

All too often, we see many politicians and media pundits make assumptions and rush to conclusions over who really forms the QAnon/Trumpist base. Perhaps the most cringeworthy of these misguided “hot takes” came from Rep. Sean Patrick Maloney (D-New York), Chair of the Democratic Congressional Campaign Committee, when he unveiled the DCCC’s 2022 messaging strategy to Politico: “If [House Minority Leader] Kevin McCarthy [R-California] wants to take his party to ‘crazy town’ and follow these dangerous ideas, he shouldn’t expect to do well in the next election. […] They can do QAnon, or they can do college-educated voters. They cannot do both.”

Except, of course, that they can and they already have. Look at Jason Gelinas, the former Citigroup senior vice president near the top of the company’s IT department who created the “QMap” to “red-pill the normies” into QAnon. Look at Melissa Rein Lively, a seasoned public relations specialist who now seems to be using her skills to sanitize her own reputation following that viral video of her Target temper tantrum. Look at the 40% of the 193 defendants who’ve been charged with crimes involving the January 6 who are part of the “white collar economy”.

It’s far too easy for “resistance liberals” and “Never Trump conservatives” to look down upon the January 6 insurrectionists and other QAnon believers as “undesirable unwashed masses”, and it’s far too easy for the “alt-right” and the “dirtbag left” to praise the insurrectionists and other QAnon believers as “working-class heroes”. It’s far too much of an inconvenient truth for any of them to touch upon the messier and far more dangerous reality of how many Americans have actually been disconnected from reality.

Just because President Joe Biden scored big margins in states and counties with high amounts of college-educated professional voters does not mean that 100% of college-educated professionals voted entirely for Democrats last year. After all, look at The New York Times’ nationwide 2020 election map. Many of Donald Trump’s best precincts in Clark County are in areas like Anthem and Summerlin with high numbers of college-educated “white collar” professionals. And even when we zoom out and notice Trump’s severe underperformance of the historic Republican baseline in larger metro regions with higher shares of “white collar” voters, Trump still came within 43,000 votes (in three states) of winning a second term.

Last month, I warned about the “sovereign citizen”/QAnon crossover conspiracy lie about Donald Trump retaking the White House on March 4 for a very important reason. Even if militia extremists fail to mount a sequel to the January 6 Attack on or before March 4, that’s still no guarantee that they won’t try again soon.

When Parler was down, the already radicalized Parler exiles moved onto Gab, MeWe, TheDonald.Win, GreatAwakening.Win, and elsewhere on the “Web of Hate” to continue their stream of disinformation… And they continue to find their way back onto mainstream social media platforms like Facebook, TikTok, and YouTube to “red-pill” even more people. Though the social media giants’ deplatforming had some effect in disrupting the flow of disinformation, the disinformation will only resume its furious flow so long as these companies continue to set their monetized algorithms in a way that amplifies the disinformation while burying the truth.

They got what they wanted. Did we actually get what we need?

Over the weekend, some pundits oohed-and-ahed over a new Echelon Insights poll that suggests Donald Trump may have a hard time winning the Republican presidential nomination again in 2024. Yet in that same poll, a full 20% of registered voters and 43% of Republicans still wrongly claim that Trump won the 2020 election. Also in that poll, registered voters are split evenly (at 38% each) over whether the top goal of politics is “enacting good policy” versus “ensuring the survival of the country as we know it”. And when we jump to the most recent Economist/YouGov poll of eligible voters, a full 36% still refuse to believe that Biden legitimately won the election.

As much as the House impeachment managers claim, “We got what we wanted,” as much as a bipartisan coalition of top Democratic and Republican Senators want to claim that this five-day trial put an end to Trumpism as a national security threat, and as much as Biden and his top lieutenants want to claim that we can just go “back to normal” now, what they all wanted isn’t really what the country needed. While we indeed need the criminal justice system to actually investigate and prosecute the crimes that culminated in the January 6 Attack, we also need a full reckoning on how and why we got here in order for us to find our way out of this mess.

The American people have the right to know what happened on January 6 and why our democracy reached the brink of collapse. The American people deserve better than an internet and an information highway system that are effectively controlled by a handful of billionaires who stand to profit off propaganda. The American people need and deserve more than a Senate where leaders cut the trial short, but not to “pivot to COVID-19 and economic relief”, but rather to proceed with their scheduled “home state work period”.

Yesterday Parler brought itself back online, but not without a wave of new controversy. After ex-CEO John Matze confirmed to Axios the truth of BuzzFeed’s reporting on Parler’s attempt to negotiate a deal with the Trumps where the Trump Organization would have taken 40% ownership of Parler in exchange for Donald Trump making Parler his “primary social media network”, the “new and improved free speech hub” has relaunched with a slew of old-hand far-right operatives who appear most interested in “protecting the free speech” of allied far-right politicians and fellow operatives.

As I’ve been warning for months, “corona scammers” and other merchants of bad faith have made it a habit of taking nuggets of truth on why Americans are furious at our economic and political status quo, then using those nuggets of truth to enhance their “Big Lie(s)” that they weaponize against us. The more the political and economic “establishment” double down on the very status quo that most Americans have grown to hate, the easier it is for these scammers to scam Americans into gambling away their own future.

Once again, I remind you: This did not “come out of nowhere”. This is the result of many years’ worth of degradation and decay. A mere week-long impeachment trial won’t magically make this crisis disappear, and a mere vote to remove one Congressional backbencher from her committee posts only scratches the surface of what her reality-based colleagues must do to counter the cyberwarfare that launched her into Congress in the first place. Americans deserve the opportunity to assess the full truth of what happened, and they deserve a better future than merely living on the brink of collapse. 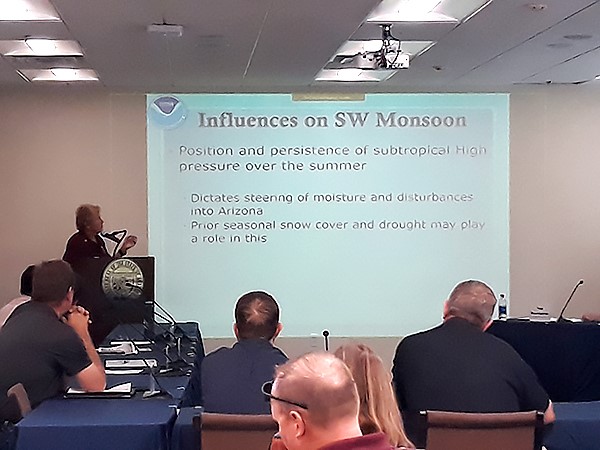 Arizona Department of  Water Resources: May 15, 2019:  Twice annually, an inter-agency group of experts analyzes Arizona’s climate conditions and decides whether to recommend to the Governor that th
Read More

Just when we thought the 115th Congress was coming to a close by scraping together one more continuing resolution to avert a government shutdown, President Donald Trump decided to turn up the drama b
Read More