This week, we’re taking a quick break from the past to focus on the present… Or are we? Last week President Donald Trump not only indulged in his usual bombastic rhetoric, but he also used some very specific language that can be interpreted in some very specific (and very troubling) ways.

While Trump may not see much in his bombastic rhetoric other than his usual penchant for striking back at enemies who cross him, some of his most devoted fans and loyal allies see a much deeper meaning. Today, we’re uncovering that deeper meaning and what that meaning truly means for all the rest of us.

WARNING: This story addresses sensitive topics, including child abuse and racist violence, and it includes some coarse adult language. Reader discretion is advised.

– President Donald Trump, at the White House on August 21

President Trump: "I am the chosen one."

Last Wednesday, while talking about his escalating trade war against China, Trump actually looked to the sky and declared, “I am the chosen one.” Yet since then, he’s lied about himself and the press corps smiling (they didn’t) as he told this “joke”.

As we discussed during “The Gateway”, internet-savvy white nationalist fascists love to describe their radicalizing rhetoric as “shitposting” in order to convince us “normies” that when they praise the Holocaust on 8chan and do Nazi salutes in public view, we just think they’re “joking”. But as we discussed during “Red Pill”, what these fascists are really doing is presenting their rhetoric in a way that normalizes it, or makes it more palatable for their intended targets.

Think of the classic fable of the frog in the pot of water. At first, it feels like a nice, warm bath. But eventually, the temperature rises and the frog is stuck in lethally hot boiling water. As easy as it is for us to dismiss online fascists’ and Donald Trump’s “shitposting” as some kind of nice, warm bath, they’re really turning up the temperature on the American people so we can gradually become accustomed to the white-hot tempest we’re now falling into.

So what does “chosen one” mean?

If you haven’t yet binged on The Family at Netflix, now may be a good time to do so. In his book, and now on the Netflix docuseries, investigative journalist Jeff Sharlet gives viewers a behind-the-scenes glimpse into the Christian fundamentalist sect who have gradually built their own power base in Washington, D.C., a power base that currently extends all the way into the White House.

While there’s plenty more that I learned from The Family, I already understood the guiding concept behind this Christian fundamentalist sect due to my upbringing within another Christian fundamentalist sect (Calvary Chapel). Like Doug Coe’s “Fellowship”, I was taught that God chooses certain leaders as his “instruments” to enact his will, and that “good, Christian, moral values” start and end on the far-right end of the political spectrum. In addition, the premillennial dispensationalist heavy Calvary Chapel looked to the headlines and interpreted news of climate crisis, refugee crises, financial crises, and military crises as the “wars and rumors of wars” (especially if/when they involve the Middle East) that must kick into high gear for the Rapture to whisk all the “true believers” to heaven (as all of us “non-believers” are Left Behind). During those final cursed months in my mother’s custody, she would talk about how she’d be raptured (because she was “saved”), I’d be left to suffer the Great Tribulation (because I was allegedly Satan-possessed), and my only hope was being saved during the Tribulation before the Antichrist gave me the “Mark of the Beast”, thereby condemning me to hell forever.

When we take all of this into account, we can see why for a certain group of Christian fundamentalists, Donald Trump’s presidency has been exciting in its triggering of such “wars and rumors of wars” that are necessary for the Rapture to happen. Whether it’s his conflict-inducing foreign policy, his war against “the globalists”, his extreme climate denial, or even his attitude toward the very people Jesus called upon his followers to show compassion toward, Trump’s constant flouting of what we’d consider “good, Christian, moral values” only strengthens the resolve of Christian fundamentalists to stand with their “chosen one” (after all, King David was also “chosen by God”) as God uses Trump to make the Rapture and the Tribulation happen.

“President Trump is the greatest President for Jews and for Israel in the history of the world…  Jewish people in Israel love him… …like he’s the King of Israel.”

In Nevada, we’ve come to know and loathe the conspiracy-heavy bigotry that Wayne Allyn Root pedals on his radio show, on the pages of a certain Las Vegas newspaper, and all over the internet. But in the last week, Root has finally become nationally infamous thanks to an exceptionally bizarre rant, one that resulted from Trump’s own accusation that Jewish-American voters who choose Democrats over Republicans show “great disloyalty to Israel”. Root not only backed up Trump on the far-right Newsmax TV, then added his own assertion comparing Trump to the “King of Israel” and the “second coming of God”, which Trump himself promptly tweeted out to the wider world.

Perhaps Wayne Allyn Root actually said all that to try to boost Trump’s standing among Jewish-Americans (though if anything, it looks to have backfired badly), but another group of Trump supporters likely interpreted his comments very differently. Back in “The Gateway”, we touched upon the Christian Identity ideology that masks itself as just another “Christian church”. But in reality, Christian Identity distorts standard Christian theology by claiming Jews are not really God’s chosen people (as the Bible teaches), but rather “children of Satan” who rejected Jesus and who must be defeated by the true “chosen people” of the white, European, Aryan race.

From the June 2015 attack on Emanuel AME Church in Charleston, South Carolina, to the August 2017 attack on the Dar Al Farooq Islamic Center in Bloomington, Minnesota, Christian Identity has often played a role in the growth of white nationalist terrorism across the nation. As conflict journalist Robert Evans explained in his audiobook The War on Everyone, American neo-Nazis deliberately infused Christian Identity into their movement’s identity in order to red-pill unsuspecting white Christians into white nationalist fascism and maintain their own religion to infuse “higher purpose” into their mission of hate.

So when Wayne Allyn Root declares Trump the “King of Israel”, Trump proclaims himself “the chosen one”, and Trump condemns all Jews who forsake him, fascists can easily twist these (already batshit crazy) statements into affirmations of their beliefs that white nationalists are the true “chosen people”, Trump is the Aryan leader they need to defeat the “globalists”, and white nationalists must continue their war against all the rest of us in order to “secure the existence of our people and a future for White Children.”

Yes, words can and do hurt us

Again, we don’t know all of what Trump intended to say when he said or repeated all this shit. And quite frankly, I’m not sure if I even want to know what he meant beyond his usual taunting of enemies and “dog-whistling” to his base.

But contrary to the old children’s rhyme, words can and do hurt people, especially when hateful words are matched with violent actions. For Christian fundamentalists, Trump’s recent words and deeds are interpreted as “signs of the times”. And for Christian Identity fueled white nationalists, Trump’s words and deeds are interpreted as permission to incite the apocalypse.

So where did all of this come from? Contrary to what former Vice President Joe Biden and other institutionalists across the political spectrum prefer to believe, Donald Trump’s presidency is anything but “an aberration”. In order to better understand where we are now and how to get out of here, we must acknowledge how and why we got here in the first place. Coming soon in “Web of Hate”, we’re going there and examining the true origin story of American fascism.

As I’m writing this, news outlets are declaring U.S. Senator Bernie Sanders (I-Vermont) the “huge!” winner of Nevada Caucus. Earlier this morning, I witnessed some democracy in action at the Bellagio
Read More 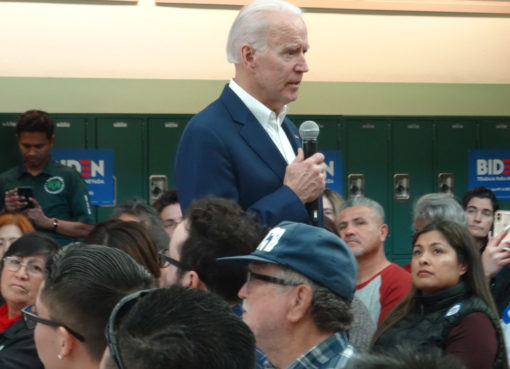 “We Are Loosing A Sense of Possibilities,” Biden Tells Latino Rally Crowd.

Las Vegas, NV. Joe Biden asked Latinos attending his Presidential rally in Las Vegas last Saturday to remember that “we are who we are because we are a nation of immigrants.” Biden reminded the att
Read More

Remember that presidential election when Nevada was roughly a two-point race, Wisconsin showed a razor-thin margin, Republicans tried but failed to pick off blue states like Minnesota, and Democratic
Read More