Mesquite, Nv. Tonight, the Virgin Valley Water Board (VVWB) voted to spend $45,000 on a water study that violates Nevada water policy in an apparent act of legislative defiance. And they voted to ignore input from the City of Mesquite, which sets the water board’s primary water demand.

In 2019, Governor Steve Sisolak, D, signed into Law, SB150 requiring a county or city government to develop a water resource plan that contains an analysis of existing water demand in the community. Further, SB150 requires these branches of government to identify “all known sources of surface water, groundwater, and effluent that are physically and legally available for use in the community” and no longer rely on single-source studies like the perennial analysis.

SB150 does allow a local water district to conduct the planning for the community. Still, that requires at least an attempt at understanding actual water availability as defined by, in this case, the city and doing so in a manner approved by the legislature.

That is not what the VVWB wants to do.  Instead, they want to ignore relying on the Nevada Water Engineer to perform a conjunctive study (which includes a perennial analysis) and disregard input from the City of Mesquite. And give away $45,000 to Glorieta Geosciences (Glorieta) to:

A literature review should be the responsibility of the Water District hydrologist, Aaron Bunker. Any sophomore college student can do a literature review. Indeed, at the meeting, the Board received a detailed source list of 42 studies on their Basin from 1969 to date that Bunker could review and republish as his own. And at no cost to the ratepayers.

Finding the perennial yield calculation is as simple as looking up formulas from the Desert Research Institute. [i] Or Bunker could review the 2010 United States Geological Survey (USGS) “Conceptual Model of the Great Basin Carbonate and Alluvial Aquifer Systems.’ The Model included Colorado System Virgin River Valley Subarea 222, which suggested that the Discharge from that Basin exceeded 5,000 AFA over the recharge.

Here is the real story. The VVWB wants to control the information that comes from a contractor rather than have objective information and studies performed by the legislated authority that would reveal two things:

In 1969, Glancy and Van Denburgh for the Department of Interior-United States Geological Survey (USGS), published a water appraisal of the Lower Virgin River Valley (recon report 51). 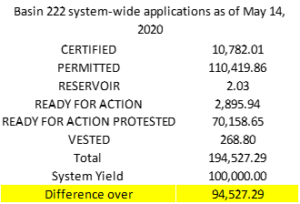 Based upon that report, the Water Engineer for the Nevada Division of Water Resources set the system (all source) yield on Basin 222 at 100,000 Acre Feet Yearly (AFY). [ii]

On August 18, 1980, William J. Newman, the Nevada Water Engineer, designated Basin 222 (order 753) under NRS 534.110 as a critical management area in which groundwater continually exceeded the perennial yield of the Basin and closed it to further permitting.

“It is the general policy of the State Engineer to limit groundwater withdrawals from a basin to the average annual recharge to the groundwater basin or its perennial yield.”

The Water Engineer set the underground perennial yield at 3,600 AFA.  On 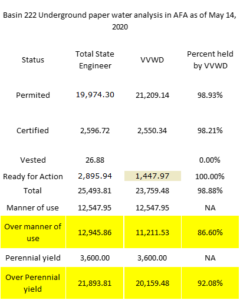 In 2010 the USGS issued the “Conceptual Model of the Great Basin Carbonate and Alluvial Aquifer Systems.’ The Model included Colorado System Virgin River Valley Subarea 222, which suggested that the Discharge from that Basin exceeded 5,000 AFA over the recharge.

In December 2011, during a Virgin Valley Water District Board of Directors meeting, then-President Karl Gustaveson called upon Forsgren Associations, Inc., to discuss an Integrated Water Resource Management Plan for Basin 222. The plan called for a coalition of all Basin stakeholders to determine how much water is available in the aquifer.

In 2012, Rock proposed an Integrated Water Resources Management Plan for Water Basin 222. The purpose: “to make sure we had affordable, reliable water for the future.” Virgin Valley Water Board members Sandra Ramaker and Karl Gustafson voted for the study. The majority turned it down.

On March 14, 2017,  King told Nevada’s legislative Committee on Natural Resources, Agriculture, and Mining that:  “It is the general policy of the State Engineer to limit groundwater withdrawals from a basin to the average annual recharge to the groundwater basin or its perennial yield.”

In response to a question about perennial yield included in reconnaissance reports, King said: “. . . Based on reconnaissance reports that the United States Geological Survey (USGS) performed in the 1950s, 1960s, and I believe most of them were done in the 1970s. I would tell you that although they are old, we found them, by and large, to be very good and to be accurate.”

He continued: “We have many of those basins throughout the state where we have real live pump tests over time where we can see that those recon reports, for the most part, are good estimates of how much water is there. We have had some busts that have been identified, and we have updated many of those estimates over the past 20 years. We are always looking to update them with the latest and greatest science. I still believe that those old reports provide great value to us.” On May 4, 2017, King addressed The Nevada Legislative Assembly Committee on Natural Resources, agriculture, and Mining, which was considering an improvement to water management in the state.  He said: “I think the conjunctive management Act supports the fact that Nevada should holistically manage and use all of its water resources: groundwater, surface water, and effluent. [v]

On July 25, 2017, Timber Weiss, a water resource specialist for the Nevada Department Division of Conservation and Natural Resources, Division of Water Resources, warned the Water Board that the perennial yield from local Basin 222 is only 3,600 Acre Feet Annually (AFA). The board ignored the warning.

Here is what they fear:

During tonight’s meeting, Bunker referred to a June 15 State Water Engineer order (1309), which lowered the Lower White River Flow System (LWRFS) [vi] from 30,630 AFA to 8,000 Acre Feet Annually (AFA) following their perennial yield study. The 8,000 AFA is slightly above the 7,100 AFA perennial yield of the LWRFS.

Increasing their concern, Bunker referred to October 7, 2020 (Order #1316 to determine the perennial Yield of Dry Valley located in Northern Nevada.

Following Bunker’s comments, Board member John Burrows asked if such studies might result in a reduction of water. Bunker did not know. Burrows motioned to approve spending $45,000 for their own Glorieta Geosciences (Glorieta) study. It passed five to zero.

[i] in 1969 George B. Maxey, for the Center for Water Resources, Desert Research Institute, outlined methodologies for Colorado river Desert Basin Hydrology studies.

“We’ve Got to Talk About Our Values”: Pete Buttigieg Talks Values, Policies, and Generational Change During His Visit to Las Vegas

Was it a coincidence that South Bend, Indiana, Mayor Pete Buttigieg held a campaign meet and greet at Madhouse Coffee near Summerlin, or was it serendipity? From the moment I stepped out of the car, I
Read More

This Week in Corona Scams: (Bio-)Weapons of Mass Dysfunction

Is COVID-19 some secret "globalist bio-weapon"? Has President Donald Trump been right all along about hydroxychloroquine being a “game changing miracle cure”? Might special magical beads deliver the u
Read More