This Week in Corona Scams, we must “round the turn” one more time on President Donald Trump’s own disinformation campaign. And since this election season is almost over, we need to check up on whatever the hell QAnon is doing.

WARNING: Since we’re talking about QAnon today, we will discuss topics like sexual violence and child abuse. Reader discretion is advised.

As this election rapidly nears its end, I fear QAnon may only be getting started. Please let me explain why.

Every so often, I face questions on why I keep close tabs on seemingly fringe-of-the-fringe groups like QAnon. Thankfully, CNN and The Washington Post helped answer this question for me. In the last week, both outlets shared the story of Jitarth Jadeja, an individual who doesn’t seem to scream, “Crazy rando!”

Rather, Jadeja got “red-pilled” by Alex Jones when he had two guests come onto his show in December 2017 to talk about the “calm before the storm” involving President Donald Trump’s nonexistent fight against nonexistent “Satan-worshipping pedophiles”. Yet because Jones and his guests portrayed this nonexistent threat as something very real and very frightening, that piqued Jadeja’s interest enough for him to find QAnon content and fall deep into their rabbit hole of nonsensical conspiracy theories that can be easily debunked with some simple fact-checking.

While Jadeja managed to escape the QAnon “very online” rabbit hole, so many others have been sucked in that friends and family launched an entire Reddit sub to vent over losing their loved ones to QAnon. As we’ve already discussed on these very pages, QAnon continues to spread disinformation about COVID-19, potential treatments, and a potential future vaccine. As we’ve repeatedly warned on these pages, this once “fringe movement” has burst into the mainstream thanks to various politicians and media pundits amplifying their baseless claims.

And as we’ve previously noted here, QAnon has already inflicted real damage on real groups combatting real human trafficking and violence against children. What was once a broad, bipartisan movement to save children from human trafficking has devolved into yet another negative partisanship fueled vortex that’s simultaneously being used by Donald Trump to save his flailing reelection campaign, and by extremist groups seeking to recruit new militants to commit violent acts.

Next, let’s contrast Trump’s claims of “rounding the turn” with the actual facts and figures on COVID-19.

As we discussed yesterday, Donald Trump continued to spread disinformation about COVID-19 during his campaign stops in Nevada and Arizona. Despite Trump’s claims that COVID-19 “came out of nowhere” and is “all China’s fault”, The Washington Post’s new documentary series builds on prior reporting and adds more details on how Presidents Bill Clinton, George W. Bush, and Barack Obama had all worked with international partners to respond quickly to epidemic threats around the world, and how they had all worked to build up America’s own emergency resources to prepare for a future pandemic.

As we’ve previously discussed on this site, it’s likely that COVID-19 began with bats, and it’s damned near impossible that COVID-19 is any kind of “globalist bioweapon” that was “engineered by China”. While it’s understandable to doubt the Chinese government’s claims about its own handling of COVID-19, there’s growing evidence that China really has fared better than the U.S. in containing COVID-19 simply due to their acceptance of actual medical science. And regardless of what Trump says about the Chinese government now, he repeatedly praised Chinese Premier Xi Jinping’s handling of the virus before he decided he needed to blame someone else for his own misdeeds.

Speaking of Trump’s own misdeeds, our regular readers already know that Trump’s refusal to contain rampant spread of COVID-19 has resulted in real, tragic, and in many cases deadly consequences. As of today the U.S. has suffered at least 227,000 COVID-19 deaths, including 1,769 confirmed COVID-19 deaths here in Nevada. And for those who survive (such as Trump himself), many still face the potential for long-term organ damage and other health complications. So far from “rounding the turn”, as Trump claimed in Bullhead City yesterday, America is stuck in a cul-de-sac of rampant spread, crowded hospitals, and one of the world’s highest death counts, and so much of this tragedy could have been prevented with more medical science and less magical thinking.

If we want to stop worrying about QAnon and other sources of disinformation and strife, we can do something about it.

As fun as it might feel to jump down the Trump/QAnon rabbit hole, keep in mind that real people face real consequences from all this “fake news”. As Governor Steve Sisolak (D) hinted during his own press conference yesterday, and as other state and local public health officials have warned for months, the increasingly hyper-partisan divide on basic public health protections has made America’s COVID-19 outbreaks far more severe than they ever had to be.

If that’s not bad enough, let’s also notice this: According to a new USA Today/Suffolk University national poll, some 74% of likely voters fear violence following this election, 69% fear America is more deeply divided, and only 55% express confidence of a peaceful transition of power should Joe Biden win this election. Regardless of what the final results look like, this crisis of crises will probably continue to loom large in the days, weeks, months, and possibly even years ahead.

Serious talk about US democracy in the latest episode of @GasLitNation. "What you have to remember is that fascism is the American story. The hope we have is that America is moving away from fascism after being founded in fascism." This may be the "last yelp". https://t.co/gn5lKunOZD

It’s honestly hard for me to figure out how to end this, so I’ll just conclude with some simple PSA’s. If you haven’t voted already, please vote if you actually want to have a say in this nation’s future. And for goodness sake, please wear your masks and maintain social distancing from people outside your household.

For more information on how to vote this year, check out the Nevada Secretary of State’s comprehensive site explaining our various options. If you’re already registered to vote at your current address and you voted in 2018, you were probably mailed a ballot thanks to AB 4 becoming state law in August. You still have time to either turn in your ballot at a secure drop-off site or vote in person. If you still need to register for the first time or update your registration, you can either register to vote online today or at a local voting site today, tomorrow, or next Tuesday. And for more information on how to vote this fall, NBC News and The Washington Post have great resource guides to keep on deck.

Two Families, One Struggle: A Closer Look at How Immigration Hits Home

What if you were on your way to work, and you got arrested for a crime you didn’t think you ever committed? How would you react? And how would you try to reconnect with family as police were trying to
Read More 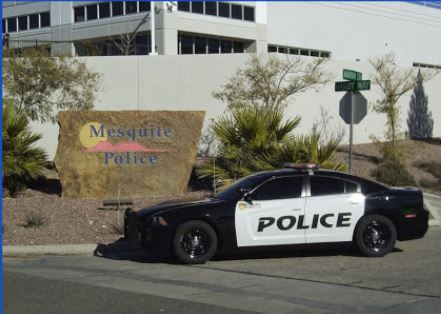 Mesquite, NV – On May 25, Lance Darrell Newlin, 67, allegedly shot and killed his son to protect his wife Jennifer Newlin, 66, at their residence. According to Mesquite Police Sergeant Wyatt Oliver t
Read More