Congratulations, America. We’re #1… in COVID-19 infections in deaths. When President Donald Trump promised to “make America great again” and give us so much “winning, winning, winning” that “we’d be tired of winning so much”, perhaps we didn’t fully grasp the meaning behind his words.

So speaking of words and meaning, we might as well catch up on our favorite “Corona Scams”!

What’s going on with QAnon?

Remember QAnon? Back in the summer of 2018, they were treated as an oddball collection of conspiracy nuts who seemed “too fringey” to pose all that much of a danger. But of course, we sounded the alarms over here. Two years, multiple “incidents”, and a global pandemic later, more people finally seem to be taking QAnon’s “fringey” rants more seriously.

Back in March 2020, we warned about QAnon’s latest venture: Promoting the “miracle mineral supplement” (MMS) house recipe bleach solution offered by the “Genesis II Church of Health and Healing”. At first, scientists were blown away by Genesis II’s and QAnon’s shilling of MMS bleach as a “coronavirus cure”. But when Donald Trump himself began promoting bleach injections, the danger became clearer than ever of “fringe becoming the new mainstream”.

Since 2018, Trump has played this game of sending “signals” to his deepest of “deep state” conspiracy-obsessed fans while refraining from an official public endorsement of QAnon’s wide-ranging “conspiracy theory to end all conspiracy theories”, which includes everything from Pizzagate to “Vice President John F. Kennedy, Jr.” And now, new information suggests that QAnon’s embrace of fraudulent “coronavirus cures”, along with Trump’s dog-whistling embrace of QAnon, has only added more fuel to their “storm”.

Recent HuffPost analysis of QAnon “decoder” social media accounts shows rapid growth in followers/subscribers on Facebook, Instagram, Twitter, and YouTube in just three months alongside a spike in QAnon-related Google searches. This, in turn, has led to QAnon promoting even more pro-Trump and/or anti-science propaganda, such as the “globalist bioweapon” accusation and anti-vaccine disinformation, that has further strengthened QAnon’s influence over the Republican Party and in American politics in general. Oh, and in case that isn’t bad enough, QAnon’s penchant for wrong medicine is leading even more Americans in the wrong direction of pursuing more fraudulent “coronavirus cures”.

So what’s the deal with Plandemic?

I meant to warn you about this viral video sooner, but we have already touched upon its general subject matter for quite some time. Yet since QAnon has helped the “documentary” Plandemic go viral, we might as well address this directly. Plandemic’s creators, including its star Judy Mikovits, hurl out a long list of accusations, everything from masks “activating” the novel coronavirus to flu vaccines “growing in dog cells”. And in another disturbing twist, a new Pew Research Center poll shows that 36% of Americans who’ve heard of Plandemic actually believe its accusations.

They shouldn’t. No really, just like the “game changing” hydroxychloroquine promoter Didier Raoult and the anti-vaccine crusader Andrew Wakefield, Judy Mikovits has a long and sordid history of destroying her own credibility. Most notably when she was a research director at the Whittemore Peterson Institute (housed at the University of Nevada’s Medical School campus in Reno) in 2009, Mikovits claimed she found a link between the xenotropic murine leukemia virus-related virus (XMRV) and Chronic Fatigue Syndrome, but Science magazine eventually retracted the entire paper she co-authored in 2011, and around the same time other labs were announcing that they could not replicate Mikovits’ findings. Mikovits then had a very messy break-up with the Whittemore Peterson Institute in late 2011, and she has since embraced a multitude of easily debunkable conspiracy theories, including the notoriously false claim that vaccines cause autism.

So really, it’s no surprise that Judy Mikovits’ many accusations in Plandemic are wildly false. Her “research” has not “revolutionized” HIV/AIDS treatment. She has never been “persecuted” as a “political prisoner”. Vaccines do work in preventing further spread of diseases, including vaccines targeting RNA viruses, and a RNA vaccine may ultimately be needed to take on COVID-19 sooner. And yes, masks do work in preventing further spread of COVID-19 by containing our droplets when we wear them.

As we already debunked in May, there is no evidence proving that COVID-19 originated from the Wuhan Institute of Virology and/or any U.S. military research facility. And as we’ve already pointed out multiple times since March, neither beach sand nor ocean water nor sunlight nor bleach nor “BS Beads” (more on them later!) nor colloidal silver nor anything Alex Jones sells at his InfoWars store has any potential to prevent, treat, and/or cure COVID-19!

And finally, some updates on your favorite Corona Scammers!

Speaking of Alex Jones, he continues to promote misinformation and outright propaganda, and he’s again promoting maskless and social-distancing-free events just to get all of us to talk about him so more people can find his website(s) and buy his InfoWars products. Meanwhile, a federal judge ordered the folks behind the “Genesis II Church of Health and Healing” in April to stop distributing MMS bleach and stop claiming that MMS bleach cures COVID-19, but a KXAS (NBC Dallas-Fort Worth) investigation found that a “Genesis II health minister” was still selling MMS bleach online a full month after the judge issued his order, and a RNZ investigation found that another “Genesis II minister” was selling MMS bleach on his New Zealand based website as recently as two weeks ago.

Of course, this is as great of a time as ever to remind everyone not to get involved in multi-level marketing (MLM). Not only is the MLM business structure predatory by nature, but multiple MLM’s have already been caught promoting their products as “coronavirus cures”. Last month, the FTC issued another round of warnings to six more MLM companies (Isagenix, Melaleuca, Plexus, The Juice Plus+ Company, Vivri USA, and Youngevity) in addition to the MLMs that were already put on notice (such as essential oils giant doTERRA and “wellness brands” Arbonne and It Works!) in April for fraudulent medical advice and/or financial earnings claims.

I’ve said it before, and I’ll say it again here: Please seek actual health advice from real medical professionals, and please do your homework before investing in any “business opportunity” that someone is hyping on the internet. COVID-19 is real, and these “Corona Scams” are based on a whole lot of fake nonsense.

Happy Holidays With The Bolero Ravel

Great musicians all. The young lady beating the  drum in the center of the back row an the Mistro are a particular delight. https://youtu.be/8KsXPq3nedY Bolero de Ravel y Dvořák: Danza eslava n° 8(m
Read More 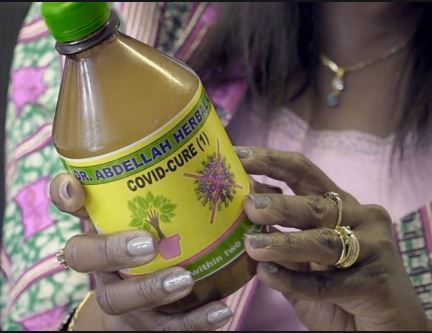 In General: Inside the Race to Become Nevada’s Next Top Cop