This Week in Corona Scams, we take on the not-so-new “sovereign” attempt to get out of paying taxes, and we take a closer look at the newest spin of the same old lies about vaccines.

Also: Please, for goodness sake, stop relying on the messiest corners of the internet for financial advice.

WARNING: I’m mad as hell, and I can’t take it any more, so we’re using some adult language today. Reader discretion is advised.

Why the “sovereign citizen” movement necessitates another “Web of Hate” crossover.

In our “Web of Hate” series, we examine the deepest, darkest, and dirtiest corners of the internet to better understand the national security threats we face today. In recent days, The New Yorker and NBC News have reported that President Joe Biden and his new administration are working on a new strategy to counter extremist domestic terrorism. Considering how so many law enforcement agencies struggled to respond to threats that so many of us saw for ourselves on the internet, it’s becoming increasingly clear that law enforcement agencies must adapt to this new reality.

However these threats don’t stop at the U.S. Capitol, and these threats don’t just materialize in the form of violent attacks. As we often note in this series, many of the same extremists also traffic dangerous disinformation about COVID-19 that’s already misled thousands of Americans into jeopardizing their own lives and others’ by refusing to adhere to scientifically proven COVID-19 prevention measures.

And of course, we’re still seeing a constant surge in “corona scams” that threaten your bank account. So before any of you start opening any emails on the “sovereign citizen tax exemption”, please read this warning and pay attention to what they’re actually claiming.

Here’s why you can’t just “repeal and replace” your tax bill with a “sovereign citizen” declaration.

As J.J. MacNab, one of America’s premier experts on far-right extremist movements, explained in 2012, “sovereign citizens” believe that they are above all laws. According to “sovereign citizens”, they can simply exempt themselves from all federal, state, and municipal laws by citing “common law” and/or “natural law”: this includes quoting the Bible, invoking the Magna Carta, cherry-picking U.S. Supreme Court rulings, and even simply changing how they sign documents. This movement is rooted in racism and anti-Semitism, yet it’s gradually attracted more Americans of color by promising a special loophole to avoid paying taxes and taking any flak from any police officer anywhere.

Spoiler alert: You can not render your 2020 tax bill null and void by declaring yourself a “sovereign citizen”. Regardless of how the federal government assigns value to the U.S. dollar, the U.S. Constitution’s 16th Amendment enshrines the federal government’s authority to collect income tax. And even though the Supreme Court has occasionally tweaked the government’s official interpretation and enforcement of the 16th Amendment, this and other federal courts have repeatedly upheld governments’ taxation authority. Also, despite “sovereign citizens’” claim that they’re legally defined as “free inhabitants”, they’re misinterpreting Article IV of the 1781 Articles of Confederation that is not even legally effective any more because the United States of America has operated under the U.S. Constitution since 1789.

Actually, let’s “Pass the Salt” on this tax evasion nonsense.

Far-right Christian Dominionist Dave Daubenmire was already notorious for using his “Coach Dave”/“Pass the Salt Ministries” platform to falsely equate gay sex with “smoking crack”, talk about going to the zoo to attack interracial marriage, falsely compare the late Supreme Court Justice Ruth Bader Ginsburg to Adolf Hitler, and peddle bizarre sexual fantasies involving former President Donald Trump. Earlier this month, Daubenmire upped the ante on his problematic reputation during an episode of his podcast where he not only boasted of his involvement in the January 6 Attack on the U.S. Capitol, but he also promoted a “sovereign citizen” tax evasion scheme.

“Sovereign citizen” tax evasion schemes are really nothing new, but I won’t be surprised if they enjoy a resurgence in popularity thanks to Trump’s refusal to concede the election and the ongoing far-right attempts to delegitimize Joe Biden’s presidency. After all, if Biden is “not the real president”, what’s the point of paying taxes to an “illegitimate government”?

Of course, as we’ve repeatedly explained on these pages, Joe Biden is the legitimate president and the true victor in last year’s presidential election. No matter how many internet rando’s conjure up fanciful excuses for these extremists’ (failed) attempt to overthrow our duly elected government, none of that is any legitimate excuse not to pay taxes. And no matter who tries to claim that some heirloom blend of Biblical passages, Magna Carta quotes, and mish-mosh of pseudo-legal mumbo-jumbo magically provides tax exempt status, just pass on their “special offer” and consult a qualified tax professional instead.

Speaking of nonsense, who’s up for another round of QAnon-sense?

Since we’re already going down the conspiracy rabbit hole, we must address this latest and greatest QAnon conspiracy special: their claim that Donald Trump will magically reclaim the presidency on March 4. Like that “Coach Dave” invitation to tax evasion, this also has roots in “sovereign citizen” ideology. More specifically they claim that the District of Columbia Organic Act of 1871 secretly turned the U.S. into a “corporation”, and that in turn renders all federal laws, including constitutional amendments, null and void.

Needless to say, this is also totally wrong. “Sovereign citizens” absolutely misinterpret federal statutes defining the entities of the federal government to justify their “corporation” claims. And no, then President Franklin D. Roosevelt’s 1933 decision to detach the U.S. Dollar from the gold standard did not magically turn the U.S. government into a “corporation” either.

Speaking of FDR and 1933, he was the last U.S. president to be inaugurated on March 4. The 20th Amendment to the U.S. Constitution moved Inauguration Day to January 20, hence why FDR officially began his second term on January 20, 1937… And why President Joe Biden officially took office on January 20, 2021. Once more, with extra feeling, Donald Trump lost last year’s election, and no amount of pseudo-legal hocus pocus justifies any attempt to reinstall Trump as president against the will of the American people.

Next up in this “Chain of Fools”: Anti-vaxxers, because of course they are!

Since this week’s collection of “corona scams” already feels like a chain reaction, let’s go to the next link in this chain of fools. Considering how the QAnon movement has also linked itself to the anti-vaccine movement, let’s examine the anti-vaxxers’ latest attempts to scare Americans away from the COVID-19 vaccines.

Predictably, anti-vaxxers are running with the reported cases of vaccinated people who’ve experienced side effects from the Pfizer-BioNTech and Moderna vaccines, and they’re falsely conflating these side effects with death. As Dr. David Gorski explains in thorough detail at Respectful Insolence, Norwegian health officials confirmed the deaths of 13 elderly nursing home patients who were already suffering severe health complications before getting vaccinated, and anti-vaxxers are now wrongfully extrapolating the deaths of the oldest and frailest nursing home patients onto the general population. And on top of this, anti-vaxxers are pointing to minor changes in verbiage at the CDC’s website to perpetuate their lies about vaccines and autism.

As we’ve been pointing out since last year, the anti-vaccine movement has linked arms with other extremist movements, such as QAnon, and developed “anti-establishment” talking points that give the appearance to the untrained eye that they’re “fighting for the little guy”, even though they’re actually just profiting off false propaganda. Just like QAnon’s misuse of real scandals like Jeffrey Epstein’s human trafficking ring to monetize their lies, anti-vaxxers are misusing Americans’ frustration with our troubled health care system to monetize their snake oil nostrums. It’s rather rich for these people to complain about “big pharma”, then turn around and sell overpriced vitamins, essential oils, “energy healing”, “BS Beads”, “coffee for your other hole”, books, lectures, and conferences, all in the name of “fighting for the little guy”.

There are reasons why I warned you (again) about the new generation of shady-as-fuck “get rich quick!” schemes last month. No matter how “anti-establishment” these scammers claim they are, their “anti-establishment” rhetoric does not make them qualified financial advisers. Case in point: The curious case of GameStop’s “stonks” and the r/WallStreetBets Reddit sub from hell.

Funny enough, I already stumbled upon Wall Street Bets before this week’s totally batshit news from the actual Wall Street. They’ve been notorious on Reddit for quite some time for pushing nonsensical “trading advice” that’s best left on their sub. It happened again with Wall Street Bets ringleaders hyping up GameStop’s stock despite GameStop’s long history of reporting terrible corporate earnings and the ongoing shift to online retail threatening the in-person sales of collectibles that’s at the core of GameStop’s business model.

In case that’s not bad enough, the Wall Street Bets traders have also been hyping up AMC’s stock despite the COVID-19 pandemic accelerating the pre-existing trend of online streaming services (like Netflix, Disney+, and HBOMax) supplanting in-person movie theaters as the go-to source for new entertainment. They’ve also been pumping up other companies with sketchy fundamentals to further grow their “anti-establishment street cred” and attack some of the world’s largest hedge funds where it hurts the most. But now that Robinhood, the low-cost brokerage firm/trading app long favored by Wall Street Bets, is curbing their ability to take their shitposting to the next level, this already bizarre Reddit phenomenon has become something far bigger IRL.

Finally, we just need to take “stonk” of all that’s gone wrong here.

We had the potential to build any future.

We built this one. pic.twitter.com/hso4Z5Ge6L

So what the fuck is really going on with GameStop, AMC, Wall Street Bets, the hedge funds, and the overall state of the equity markets? As Wall Street professional turned economic justice activist Alexis Goldstein explains, media pundits are getting it all wrong by framing this as some “David vs. Goliath battle on the stock market”.

Rather, Wall Street Bets made the wrong bet by placing their bets on Robinhood: For all their “anti-establishment swagger”, the Wall Street Bets traders used a brokerage that FINRA fined $1.25 million in 2019 for failing to prioritize their investors’ best interest, the SEC charged last December with failure to disclose their “payment for order flow” that cost their investors over $34 million, and has such a “payment for order flow” with a “market maker” hedge fund called Citadel Securities that accounted for over 55% of Robinhood’s options executions as of last July. The SEC fined Citadel $22.6 million in 2017 for what was essentially false advertising, and Citadel is one of the two firms now investing in Melvin Capital, one of the hedge funds that got squeezed by Wall Street Bets’ rush to gobble up GameStop’s stock and call options.

In other words, contrary to the folklore its name derives from, Robinhood took from smaller retail investors and day traders to give to one super-rich hedge fund, and the Wall Street Bets traders got played like fiddles the whole damned time by the very hedge fund titans they thought they were fighting against. This right here illustrates why we should not make financial decisions based on how “based” they appear. You’re better off sticking with the basics of smart investment, and we’ll all be better off if we finally put in more effort to fix the broken economy at the heart of this hot-ass mess. 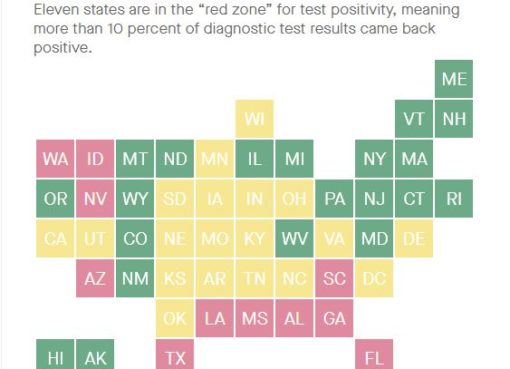 At least New Hampshire didn’t make us wait. The numbers are in, and we have a clearer picture of who’s rising to the top along with who’s falling behind. Now that the first two early states are  behin
Read More