Over the weekend, ten Republican U.S. Senators announced their own “stimulus” proposal to rival President Joe Biden’s American Rescue Plan. The ten Republicans claimed they were offering their proposal in the spirit of “unity, compromise, and bipartisanship”, but what’s actually in their proposal? And why do we even need another round of “stimulus” so soon?

Today, we’re crunching a whole lot of numbers as we explain what’s the deal, where the deal might finally land, and why this deal is so darned important.

What’s in the Republicans’ “stimulus” counteroffer?

"Thanks for coming down," Biden said to the senators

Collins thanked him for the invitation

Biden said he was "anxious" to talk

(and yes, those are dog socks) https://t.co/8YlUkrvSG1

As we now know, President Joe Biden’s American Rescue Plan clocks in at $1.9 trillion because it includes a slew of relief programs, from $350 billion in flexible aid for state and local governments and a $350 billion extension of expanded unemployment aid to September (including boosting the federal weekly supplement/top-off from $300 to $400) to $170 billion for safe school reopening and $84 billion for expanded paid family leave. And thus far economists from across the ideological spectrum, from Kevin Hassett and Glenn Hubbard on the right to Paul Krugman and the Economic Policy Institute’s Josh Bivens and Heidi Shierholz on the left, have sided with Biden on the need for more robust and comprehensive “stimulus”.

In contrast, the Republican plan only includes $618 billion in “stimulus”. So what did they chop off Biden’s plan to conjure up theirs? For starters, the Republican plan has $0 in flexible state and local government aid. As I’ve continually pointed out in these pages, Governor Steve Sisolak (D) has explained while presenting the state of the state’s budget, and even some Republican legislators tacitly admitted during last July’s special session, there’s probably zero chance of the state budget returning to 2019 levels, let alone expanding state services to meet the needs of our more economically strained reality of 2021, absent federal aid.

Without sufficient federal aid, state and local public sector workers remain at risk of losing their jobs and/or cuts to salaries and benefits. And without sufficient federal aid, states like ours will continue to struggle to deliver the programs and services that the federal government has promised, such as unemployment aid, Medicaid health care, and even administration of the COVID-19 vaccines. In other words, “stimulus” without aid for state and local governments is like attempting to reinvent the wheel when we just need new tires to get the car to drive.

Let’s note some additional differences between Biden’s “stimulus” plan and the ten Republicans’ alternative, and why all of this matters.

While the Congressional Budget Office (CBO) projects 4.6% annual GDP growth this year, the CBO also expects unemployment to remain above pre-COVID-19 levels for the rest of the decade absent further “stimulus”. As we thoroughly explained last fall, and as last week’s GameStop/AMC/Wall Street Bets clusterf–k highlighted for everyone all over again, our current “K-shaped recovery” has been good for the wealthiest of Wall Street investors and decent for select college-educated professionals who can afford to “Zoom to work”, but it’s left behind millions more Americans who don’t have hefty 401(k)’s and/or the ability to pursue telecommuting jobs, and our overall economic health will continue to suffer unless we actively change this trajectory.

Once we factor in this bigger picture, the ten Senate Republicans’ “stimulus” counteroffer looks smaller and even further away from economic reality. As federal, state, and local authorities continue to try to fix the nation’s troubled vaccine supply chain, it’s quite a risky move to only extend unemployment aid to June, as the ten Republicans are proposing. With public school districts still scrambling for resources to reopen in-person classrooms, $20 billion for schools is far less than it might initially appear.

Then, there’s that one item in Biden’s Rescue Plan that constantly attracts the most media attention: the $1,400 one-time “stimulus checks” for Americans who earned $75,000 or less in 2019 taxable income. A growing chorus of progressives are demanding broadly distributed $2,000 monthly “survival checks”, while the ten Republicans are only proposing $1,000 one-time checks with more and tighter means testing that would exclude most Americans who earned $50,000 or more in 2019 taxable income from getting any “stimulus checks”. While it’s understandable to want to direct aid to those most in need, the reliance on 2018 and 2019 tax records misses all the economic wreckage that took hold in 2020.

There’s also this: Nevada is far from the only state where the unemployment system has been bogged down by a massive backlog of claims, and remember that states have also struggled to keep up with demand for other safety net programs (like Medicaid) due to their dire financial straits. Once we factor all of this in, it’s depressingly easy to imagine hundreds of thousands, if not millions, of Americans who qualified for more assistance, but only got the April 2020 $1,200 and December 2020 $600 “stimulus checks” because they couldn’t access these other CARES Act programs. By sending another round of “stimulus checks” and providing aid for state and local governments, the federal government can get cash to those in need quickly while also helping states clear these backlogs so people can eventually get help through unemployment insurance, Medicaid, SNAP, and other longer-term social safety net programs.

Yesterday, the ten Senate Republicans met with Biden in the White House and spoke with him for over two hours. While Biden and Senator Susan Collins (R-Maine) both described the meeting as “productive”, the probably more “productive” development occurred 340 miles away earlier in the day. During multiple media outings, West Virginia Governor Jim Justice (R) made clear his preference for “going big” on economic relief. Keep in mind that West Virginia is also home to U.S. Senator Joe Manchin (D), one of the conservative Democrats who’s been publicly playing coy on where he’ll land on “stimulus”.

While on CNN yesterday, Justice dismissed Congressional Republicans’ deficit-scolding and pointed to his and Manchin’s constituents in explaining why Congress needs to move more quickly on “stimulus”: “We have really got to move and get people taken care of and get people back on balance. […] We got people that are really hurting. I mean that’s just all there is to it.”

When we venture even farther from Capitol Hill, we see an even stronger consensus on “stimulus”. According to a new Vox/Data for Progress national poll, 63% of likely voters want Congress to pass a new relief package “as soon as possible”, 66% want Congress to “make sure we prioritize small businesses and working families” while only 25% prioritize “bipartisanship and typical congressional procedure”, and 64% support Congressional Democrats utilizing budget reconciliation to pass Biden’s American Rescue Plan. When it comes to the big individual items in Biden’s Rescue Plan, the least popular item was the $15 national minimum wage, and that still got 57% support. And on the biggest question of whether Biden should “meet the moment as quickly as possible” with his own plan or “settle for less aid because bipartisanship is important”, 57% choose “meet the moment” versus 34% for settling with Republicans for less.

Then this morning, we got a Yahoo/YouGov national poll that largely mirrors the Data for Progress numbers in showing broad public support for Biden’s American Rescue Plan. 74% of eligible voters support the $1,400 “stimulus checks” on top of the $600 checks from last month. 69% support more funding to expand vaccination efforts. And on the minimum wage, 58% support a national $15 per hour baseline.

“We’re doing all we possibly can with the resources we have. The faster Congress acts, the more we can scale up our resources and efforts.”

Just 24 hours after Governor Jim Justice’s national media blitz, Senator Joe Manchin said the magic words: “I will vote to move forward with the budget process because we must address the urgency of the COVID-19 crisis.” In other words, Manchin will vote for the budget resolution that opens the door to a reconciliation version of Biden’s Rescue Plan, and it’s increasingly likely that fellow conservative Democratic Senator Kyrsten Sinema (D-Arizona) will follow suit.

Beyond just Manchin and Sinema, the rest of the Congressional Democrats appear more united in their desire to pass COVID-19 relief on the scale of Biden’s Rescue Plan. Less than two weeks after Senator Catherine Cortez Masto (D) indicated her preference for “find[ing common ground” when asked about using reconciliation to pass a new relief package, she issued a joint letter with Senator Jacky Rosen (D) indicating that they do not want state and local government support removed from COVID-19 relief this time. And so far, even with House and Senate Democrats splintering into diverging ideological and strategic lanes, it increasingly appears that Biden’s Rescue Plan may be in the neighborhood of the final gathering place where they can all finally pass a relief package.

Tomorrow we’ll have more on the Biden administration’s latest efforts to expand COVID-19 vaccine accessibility, but for now we’ll leave you with this explanation from White House COVID-19 Response Coordinator Jeff Zients on the need for Congress to pass more relief funding: “We’re doing all we possibly can with the resources we have. The faster Congress acts, the more we can scale up our resources and efforts.” 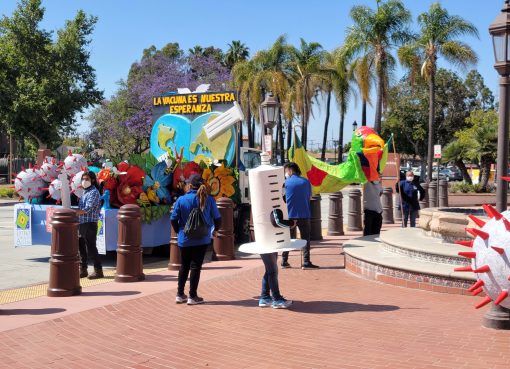 Weapons of Mass Distraction, and the Ideology of Hate at the Center of the Destruction

This past week has certainly been a tragic one for this nation. Hot off the heels of the arrest of Cesar Sayoc for sending pipe bombs to several people President Donald Trump has verbally attacked on
Read More

Thoughts on the First NV-Gov Debate

Tonight, Nevadans finally had the opportunity to hear directly from two of the candidates running for Governor… With no narrator, no slick graphics, and no escape hatch when the reporters asked the to
Read More