This past weekend, SEIU Local 1107 held its “Unions for All” Summit here in Las Vegas. Considering that we have less than a month left until the Nevada Democratic Caucus, the presidential candidates are scrambling to shore up union workers’ support. One candidate appeared in person, a couple live-streamed in, another phoned in, and others relied on surrogates to get their message across.

Here’s how the Nevada voters at SEIU process all of this, as well as what they thought of the candidates promises to make America work for working-class communities again.

Click here for Part 1, where I provide more details on the candidates and/or their surrogates said. Below, you’ll find union workers’ and leaders’ perspectives.

“We don’t just want lip service. We want action behind those words.”

– A SEIU 1107 member, on what they expect from the candidates they support

In Part 1 of our SEIU 1107 “Unions for All” Nevada Summit recap, we took a glance at how the campaigns made their presence known and tried to appeal to the union workers who may very well decide their fate at next month’s Democratic Caucus. Here in Part 2, we’re hearing directly from the workers. What did they think of all this?

Well, it’s complicated. On one hand, I could sense genuine appreciation for the campaigns that did put in some real effort to connect with them, particularly for billionaire philanthropist Tom Steyer when he actually showed up in-person and stayed after his speech and Q&A session to do selfies with them. But on the other, it wasn’t hard to feel the frustration over candidates glossing over their attempts to get concrete answers out of them.

This morning, just hours after hearing from surrogates for former Vice President Joe Biden and U.S. Senators Bernie Sanders (I-Vermont) and Elizabeth Warren (D-Massachusetts) (as well as Sanders himself via phone), I heard comments like, “What I heard from them was lip service,” and, “They didn’t give enough specifics.” This was during a workshop where union members strategized on how to make “Unions for All” a reality. Another member then commented, “We don’t just want lip service. We want action behind those words.”

“When you’re in the hospital, you dedicate yourself to the patients. But if you don’t have enough staffing and you have so much workload, you have to figure out how to do your job.”

Grace Vergara-Mectal serves as Executive Director of SEIU Local 1107. On Saturday, she spoke with us about why they convened this summit. If you’re wondering when and how they’ll endorse, here’s the scoop: They haven’t yet decided whether they’ll even issue a presidential endorsement pre-caucus.

Instead, Vergara-Mectal stressed, “We wanted to make sure that the candidates understand our top priorities, so they can hear from our members what are the top issues that we care about.” That is, she and other union leaders want the candidates to communicate more directly with members rather than just show up for the occasional event(s) and expect an endorsement.

Grace Vergara-Mectal herself works in health care, and her union now represents over 9,000 nurses and other health care workers across Nevada. While the candidates have been arguing over “Medicare for All” single-payer health care, SEIU 1107 members have had to fight for their own health care and for better care for their patients. On that note she appreciated U.S. Senator Bernie Sanders’ (I-Vermont) assurance that his “Medicare for All” plan will allow union workers to focus on negotiating higher wages and better benefits by taking health insurance off the bargaining table, but she ultimately wants all the candidates to realize that patients and workers can’t wait on the Democratic Party to settle their philosophical argument over “strategy” and terminology.

“When you’re in the hospital, you dedicate yourself to the patients. But if you don’t have enough staffing and you have so much workload, you have to figure out how to do your job,” Vergara-Mectal explained.

“When people talk about these policies, I want to see them find a way to help more Americans get health care. It’s not just about policy or about Medicare. How do we help Americans stay alive?”

Jody Domineck also works in health care: She’s a SEIU 1107 member and a nurse at a Sunrise hospital. Like Vergara-Mectal, Domineck also wants to hear more specifics and stronger guarantees of action.

“Southern Nevada has a health care worker shortage. We see a lot of challenges here, and these challenges trickle all the way down to the individual hospitals,” Domineck pointed out. She then requested that the candidates commit to more legislation, more funding, and more commitment to actually solve this problem.

On the great 2020 debate over “Medicare for All”, “To me, it sounds like they’re still talking about [narrow] policy. The term ‘Medicare for All’ gets thrown around, and I want to hear them actually understand what not having health care means.” She continued, “I want them to see how the system works when you have a child diagnosed with cancer, and they can’t get treatment, and parents have to make the most horrible decision of their lives while their child literally fights for their life.”

Like Vergara-Mectal, Domineck wants a break from the philosophical arguments and terminology punditry, and she wants the campaigns to focus on what really matters here: “When people talk about these policies, I want to see them find a way to help more Americans get health care. It’s not just about policy or about Medicare. How do we help Americans stay alive?”

“It’s about having good, available medical care at low or no cost. That includes medicines, treatments, etc. That’s very important to us as a local, and to the union overall.”

By the time I spoke with SEIU 1107 President Brenda Marzan, members had already heard directly from Steyer in-person and Buttigieg via livestream, and they would later speak with venture capitalist Andrew Yang via livestream. On that, Marzan noted, “I think that makes a huge difference.” However she also noted Buttigieg’s multiple visits to Nevada, including to various unions, and she expressed her appreciation for Warren and Sanders reaching out to SEIU to help them develop their respective “Medicare for All” plans.

Marzan went on to explain why some in other unions, such as Nevada’s own Culinary Union, are wary of ditching their hard-fought, top-of-the-line health plans for something that’s currently just long-shot legislation, but she also noted that SEIU workers and other workers have employer-sponsored health insurance, so they can’t run their own health programs like the Culinary Health Fund does. As a result, SEIU is more open to single-payer than the more skeptical unions, even if SEIU and other top influential unions haven’t (yet?) endorsed any one specific universal health care proposal.

As Marzan summarized SEIU’s stance, “It’s about having good, available medical care at low or no cost. That includes medicines, treatments, etc. That’s very important to us as a local, and to the union overall.”

Once more, with feeling: Our voters matter.

As I noted in Part 1, I still noticed some frustration and skepticism among SEIU 1107 members over whether the candidates actually understand what they’re fighting for and whether they’ll commit to joining their fight. Yet on the flip side, I did find this genuine appreciation for the progress they’ve made in pushing the candidates to take bolder stances on workers’ rights and health care.

I also found hope that they may yet find a champion for their cause, and that they can propel that champion all the way to the White House. When Steyer led them in a chant of “I believe that we will win,” SEIU 1107 members happily joined, as they’ve been putting in a whole lot of leg work to actually make that happen for whomever ultimately wins the Democratic nomination.

According to SEIU internal data, a solid 72% of SEIU 1107 members who were registered to vote actually turned out to vote in 2018. And according to CNN exit poll data, both Senator Jacky Rosen (D) and Governor Steve Sisolak (D) enjoyed double-digit margins (22% for Rosen, 14% for Sisolak) among union voters that strengthened their overall margins of victory. For anyone who’s still wondering why any of this matters, this right here is a stark reminder to Democratic candidates that union votes matter in this fine Silver State of ours. 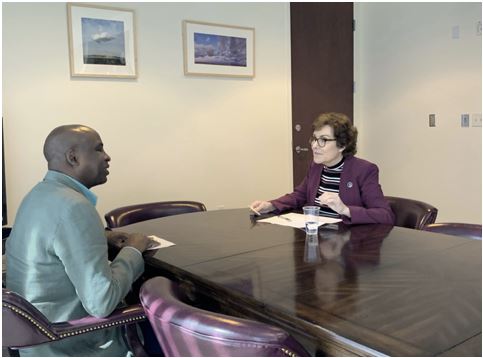 U.S. Government Releases Chilling New Climate Report. What Can We Do About It?

Last Friday, the U.S. government dropped perhaps the most consequential and  report of the year. For all President Donald Trump's huffing and puffing and threatening to “shut it down” over his fear-mo
Read More