As we rush towards our “First in the West” presidential caucus, Nevada Democratic voters have not just asked the candidates tough questions, but they’ve also sought answers on how the caucus itself will work. Today, U.S. Senator Jacky Rosen (D) joined Nevada State Democratic Party officials and Culinary Union leaders to announce early vote sites for February 15-18, 2020, and assure Democratic voters that no matter where they are, they can participate in the caucus.

So what’s happening with the caucus?

Just over a month ago, the DNC rejected the Nevada and Iowa state parties’ plan to hold phone-in “virtual” caucuses over security concerns. Since then, Iowa Democrats have scrambled to assuage concerns that their caucus will remain inaccessible to most potential voters. But here in Nevada, Democrats have hoped that their in-person early voting plan will help absorb the blow of losing the virtual caucus that had been touted as a revolutionary tool to expand access to a nominating contest that’s historically kept people out.

As we’ve run into a few local Democratic influencers on the campaign trail, they’ve been encouraged by the state party’s efforts to engage the larger community, prepare voters for the caucus process, and encourage more participation in it next February. However, like Iowa, concerns continue to linger over whether Nevada Democrats are doing enough to prevent another 2008 or 2016-like “caucus fracas” next year.

At the Culinary Union hall near Downtown Las Vegas, which itself has been designated as a caucus vote early site, Assembly Member William McCurdy II (D-Las Vegas), who also serves as Chair of the Nevada State Democratic Party, stressed, “We’re committed to a uniquely Nevada caucus system, one that reflects the diversity of our state.”

“By opening early voting, we want to give as many people as we can the opportunity to make their voices heard in the caucus process.”

The state party’s official list includes 80 early voting sites throughout the state, including Lincoln County, Elko County, Churchill County, and multiple spots in the Carson City/Douglas County region. In addition, Washoe County Democrats will have sites in Incline Village (North Lake Tahoe), the University of Nevada, Reno, and multiple area libraries. And down south, Clark County Democrats will have sites ranging from the Mesquite Deuce Building to Lucy Ethiopian Restaurant, and from the Laughlin Library to the new East Las Vegas Library.

As Senator Rosen described the big news, “By opening early voting, we want to give as many people as we can the opportunity to make their voices heard in the caucus process.”

And as we all stood outside the Culinary Union hall, Rosen noted, “It’s an important part of Nevada history. We have to protect the voices of our union communities. We have to lift up the voices of our diverse communities of color.” In addition to having multiple sites in rural and suburban communities, the party will have multiple sites serving Native American historically African-American, Latinx, and Asian-American and Pacific Islander (AAPI) communities in the urban core of Las Vegas.

“We understand the importance of voting. When we vote, we win.”

Culinary Union Secretary-Treasurer Geoconda Arguello-Kline celebrated today’s news and declared, “Today is a historic day for us. […] We are very proud to host an early vote site right here in our neighborhood.” Beginning in 2008, Culinary fought and succeeded in securing day-of caucus sites on the Las Vegas Strip, so weekend shift casino workers can caucus.

Noting their unique role in turning out working-class voters, which typically means the margin of victory for Democratic candidates up and down the ballot, Arguello-Kline noted, “We understand the importance of voting. When we vote, we win.”

In the last two weeks, the national conversation has increasingly been dominated by President Donald Trump, his administration’s (ab)use of its power to “get dirt” on former Vice President Joe Biden, and House Democratic leaders’ recent decision to move ahead on impeachment. Yet closer to home, Rosen has previously urged the candidates, “Be pragmatic, be a problem solver, think about what people are talking about at the kitchen table.”

At Culinary today, Rosen and McCurdy stuck to that line of argument as they focused more on hitting Republicans on those “kitchen table” issues (like health care and workers’ rights) than addressing Biden and Ukraine. Yet with just over four months to go until caucus voting begins (early voting runs February 15-18), it will ultimately be up to Nevada Democratic voters to decide what will be the biggest issues as they also decide who they want as their nominee. 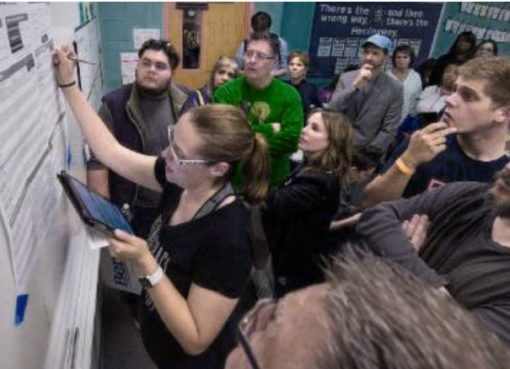 NV Dems Skirt Chaos In First in the West Caucus

Policy Matters: We Take a Closer Look at Where the Presidential Candidates Stand on Mental Health Care and Substance Abuse Treatment

Every so often, we hear politicians talk about mental health. But usually when they do, they do so to deflect from other pressing matters, such as gun violence. Yet mental health care and substance ab
Read More