At first glance, the U.S. economy looks quite awesome. Unemployment is low, GDP (as in, gross domestic product) is positive, and corporate earnings have been at or near record highs. So what’s the problem?

Short answer: Wages are too damned low. Longer answer: Actually, I’ll let you hear from the Las Vegas area workers who met with Rep. Susie Lee (D-Las Vegas) in her Henderson adjacent office today as they explain why they need their level of pay to match the quality of their work.

“We need to do something better as a country. That’s what this bill is about.”

Earlier today, Rep. Susie Lee held a roundtable discussion with Southern Nevada workers to discuss HR 582, also known as the Raise the Wage Act. If it becomes law, the Raise the Wage Act will gradually increase the federal minimum wage to $15 per hour by 2024. Reps. Lee, Steven Horsford (D-North Las Vegas), and Dina Titus (D-Las Vegas) are all cosponsors of the House bill, while Senator Jacky Rosen is cosponsoring the Senate version (S 150) introduced by Bernie Sanders (I-Vermont).

So why is Lee cosponsoring this bill? In her own words, “In the United States, we’ve seen wages and earning power diminish.” She later declared, “We need to do something better as a country. That’s what this bill is about.”

“[When] I was working minimum wage, I was living in my car for two months. […] The money isn’t changing, but the bills are going up, the costs are going up.”

Maria Elena Ayala has worked as a housekeeper in Las Vegas, and she came to today’s roundtable with fellow activists from Arriba Las Vegas Worker’s Center. As Ayala explained, “When the wage is so low and you have a family, you can’t support your family even though it’s such a laborious job.” She then expressed hope that more of Lee’s Congressional colleagues will listen to them: “I’m here hoping we can raise the minimum wage so that we can better provide for our families. The wages are too low.”

LaShonda Mar, who’s worked multiple service industry jobs here in Las Vegas, concurred: “It’s no longer [a livable] minimum wage.  [When] I was working minimum wage, I was living in my car for two months.” She then added, “The money isn’t changing, but the bills are going up, the costs are going up.”

“We need to reflect the dignity you bring to the workplace. […] We have to get to a point where people can work for a wage that’s liveable.”

For years we’ve heard the assumptions, the rumors, and the stereotyping. Minimum wage workers are allegedly mostly pimply teens flipping burgers or working cash registers for extra “play money”, so why should “job creators” be forced to double their pay just so these kids can buy more video games? But in reality, according to the Economic Policy Institute and National Employment Law Project, fewer than 10% of low-wage workers are under 18. In addition 28% of these low-wage workers have children of their own, 47% already have some college experience, and nearly two-thirds are working full-time.

After the roundtable program concluded, Maria Elena Ayala spoke with us a little more alongside Jose Valenzuela, Maria Concepcion Medina, and Arriba Las Vegas Worker’s Center’s Bliss Requa-Trautz to dispel the rumors and break down the stereotypes.

They certainly had an affect on Rep. Susie Lee.

As she began to wrap up the roundtable program, she declared, “We need to reflect the dignity you bring to the workplace.” She then added, “We have to get to a point where people can work for a wage that’s livable. If you believe in trickle down economics, you have to believe in trickle up economics as well.”

With things like government shutdowns, border (wall funding) brawls, and nuclear showdowns going down every time we check in on the cable news shows and pundit roundups, it’s easy to forget that in 2019, the minimum wage is worth less now than it did 50 years ago. While there are so many crises unfolding around us, it’s important to remember the one crisis that hits closest to home, and the one crisis that we can address by changing our policies: In 2019, Americans may be working, but far too many of us are struggling to make a living. 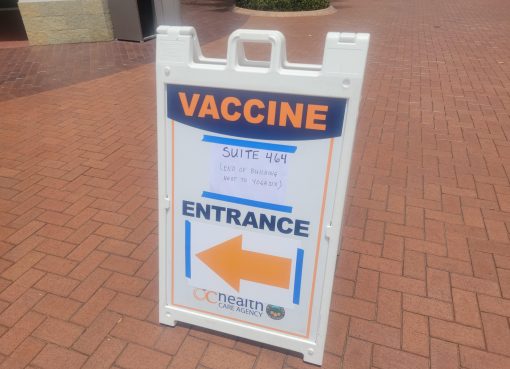 This Week in Corona Scams, we must talk about the COVID-19 vaccines again. As we’ve been warning for months, the anti-vaccine movement’s disinformation campaign has wreaked havoc on our public health.
Read More

One More Question on the 2020 Caucus: What About the Republicans?

Thus far, this very early onset of 2020 caucus-mania has focused on the two-dozen-plus Democrats who are running or considering a run for President. If all the coverage feels lopsided, that’s for a re
Read More

“This isn’t a game. This is serious. People are dying. [...] We need to do everything we can.” Governor Steve Sisolak (D) said this during tonight's public briefing on Nevada's COVID-19 response and r
Read More