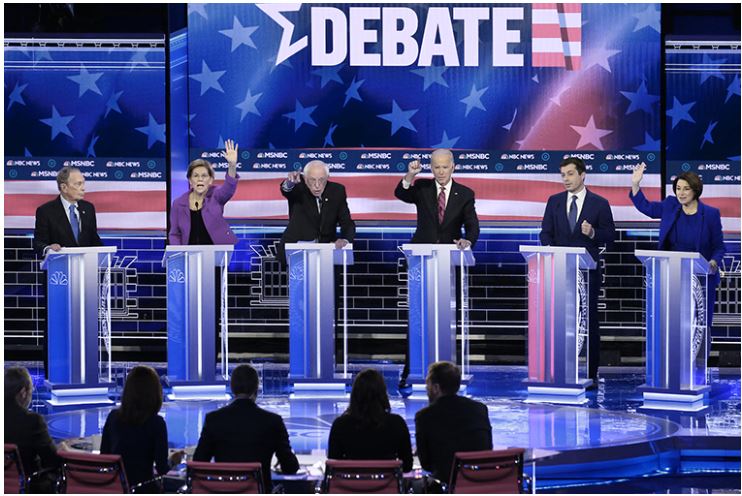 One could hear the audience gasp when Bloomberg told Senator Elizabeth Warren that he would not set women free from individual non-disclosure agreements (NDA’s) to discuss their allegations of his sexual misconduct towards them. However, today, Bloomberg’s company released a statement that they would release three women from their non-disclosure agreements, and Bloomberg said that “as long as he owned his companies he would no longer require NDA’s.

The audience listened attentively as Bloomberg defended his critical stop-and-frisk policy he implemented as the former New York City Mayor. Bloomberg argued that the policy, which he apologized for, did [arguably] contribute to a reduction in homicides in the city.

NBC News analysis counted 45 of the total 95 attacks against Bloomberg. According to NBC, that total was the most times candidates attacked one another in any of the Democratic debates.

Nevada Independent’s Jon Ralston urged Bernie Sanders to defend allegations that his supporters have viciously attacked the Culinary Union for their opposition to Sander’s Medicare-for-all stance. In response, Sanders argued that he was a long-time Union supporter, and he would not tolerate toxic behavior on the part of his supporters.

Biden repeated arguments in made Sunday on Meet the Press, saying that the democratic socialist candidate [Sanders]“may not be responsible for it, but he has some accountability.”

“You know me well enough to know if any of my supporters did that, I’d disown them. Flat disown them,” Biden told Meet the Press moderator Chuck Todd. “The stuff that was said online. The way they threatened these two women who are leaders in that culinary union. It is outrageous.”

In an opinion piece at Bloomberg.com Cass R. Sunstein[i] an  American Legal Scholar, says that “some Democrats worry that a lot of his [Sanders] supporters will not work or even vote for any other candidate, whereas the backers of his Democratic rivals will enthusiastically work or vote for anyone the party nominates, including Sanders.”

Sunstein points to the 2016 election, where according to one estimate, over 20% of Sanders voters declined to vote for Clinton – and they may well have thrown the election to Donald Trump. The estimate found that as many as 12% of Sanders supporters actually voted for Trump, and an additional 10% or so stayed home or supported a third-party candidate. At least some of them shared Trump’s views on immigration. Others seemed to adopt a slogan: Bernie or bust.

Sunstein argues that Trump supporters and Sanders supporters have that, at least, in common. Their outrage is fueled by the dynamics of “group polarization,” which means that when like-minded people speak mostly with one another, they usually end up more confident and more unified – and more extreme.

That, according to the legal scholar, “is one reason that political rallies work (and can be both inspiring and frightening).” If people think their candidate is the best, or other candidates are weak or sellouts, their judgments to that effect will be fueled and magnified by the very fact that they are surrounded by people who think the same thing. And, he says, if people begin with a degree of outrage, their interactions with one another will greatly intensify their feelings.

All five of the candidates took a swipe at the Billionaires spending in his drive to become President. Bloomberg argued that even if he loses, he will continue to spend to defeat Donald Trump.

Sanders dove into the economic argument by correctly pointing out that “the average American saw less than a 1 percent increase in their income.[ii],[iii]

Buttigieg coitized klobuchar for supporting legislation to declare English the official langue of the U.S.

“Do you know the message that sends in as multilingual a state like Nevada, to immigrants?” he said.[iv]

Klobuchar reacted sternly when Buttigieg said that she was most likely to vote for Trump judges “of the senators running for president.” His numbers are wrong, Klobuchar said. “I have opposed, not supported, two-thirds of the Trump judges, so get your numbers right, and I am in the top 10 to 15 of opposing them,” she said.

Here’s the fine print of what everyone’s talking about: progressive blog Her campaign told NBC News on Wednesday night that those numbers are outdated and that using that same methodology, the senator has voted in favor of Trump’s judicial nominees just 33.51 percent of the time. That’s still more than Sanders and Warren, who voted for Trump’s judicial nominees about 25 percent of the time by the same math.

While Bloomberg took the brunt of the attacks, he was correct when he said that the person who could defeat Trump would have to be someone who can attract Democrats, independents, and Republicans.

“That was the coalition that propelled Democrats to success in the midterms – and it’s the coalition we will need to win in November,” he said. “That won’t happen with pie in the sky promises and proposals that will bankrupt the country.”

[i] Sunstein, Cass R.  “Why Sanders Supporters Are So Tenaqcious,” February 20, 2020 atL https://www.bloomberg.com/opinion/articles/2020-02-20/bernie-sanders-supporters-driven-by-outrage.

[iii] Sanders’ attacked Bloomberg 13 times, the most of any candidate in the debate.

[iv] Klobuchar was one of 17 Democrats to support a 2007 amendment ending a requirement for federal agencies to provide materials in languages other than English, according to The Associated Press. She disavowed this stance last week, saying English shouldn’t be the national language of the U.S.

[v] ThinkProgress reported nearly a year ago that Klobuchar had voted for more than 56 percent of Trump’s judicial nominees who were eventually confirmed — that may be where Klobuchar prepped her two-thirds number response.

Yesterday, we took a closer look at where the 2020 presidential candidates stand on universal health care. Today we’re taking a moment to remember that even if one of those Democrats defeats President
Read More

This Week in Corona Scams: QAnon-sense

This Week in Corona Scams, it's looking extra scammy out there. With Labor Day fast approaching, we have some repeat offenders to check up on. And as always, QAnon tops that repeat offender list. Als
Read More