In the last few weeks, we’ve finally seen a bumper crop of Nevada polls: A couple showed a very close race here in Nevada, while one showed a developing “Blue Wave” landslide and others were somewhere in between. Let’s take a closer look at these polls and other important sets of numbers to see where the presidential race actually stands here in Nevada and nationwide.

October 7, 10:25 AM UPDATE: The New York Times and Siena released their new Nevada poll showing Joe Biden ahead of Donald Trump 48%-42%. Never mind their awkward geographic crosstabs – all the rest of the crosstabs appear reasonable. Keep reading below to see why I suspect these NYT/Siena numbers are probably close to the truth.

Since we’ll be debunking some annoying misconceptions, plenty of sloppy spin, and a whole lot of ridiculous “hot take” punditry later, let’s get this out of the way now: Republicans truly have been chipping away at Democrats’ voter registration lead here in Nevada. Democrats’ statewide registration lead officially stands at 88,459, down from their late March (post-caucus/early pandemic) high of 95,275. And according to The Nevada Independent’s Jon Ralston, Clark County’s delay in moving a slew of voters to inactive status only delayed the knocking of Democrats’ statewide lead down further toward 75,000, but recent Democratic efforts to restart in-person campaigning (more on that below) may already be helping them re-grow their registration lead.

Basically, Democrats’ raw voter registration lead now stands somewhere between their 2016 advantage and their 2018 advantage. Keep in mind Hillary Clinton and U.S. Senator Catherine Cortez Masto (D) won in 2016, and that U.S. Senator Jacky Rosen (D) and Governor Steve Sisolak (D) won in 2018. Unless Republicans significantly slash away at the rest of Democrats’ registration lead and/or win over a significant amount of nonpartisan and Democratic crossover votes in this election, the current registration trend isn’t exactly pointing to a huge “Trump Bump”.

Next, WTF are these Nevada polls saying?

For most of this year, we’ve experienced a dearth in Nevada election polling. But last month we finally got a bumper crop of new polls, including numbers from the highly rated Fox News (no really, they order good polls!) and New York Times/Siena operations. NYT/Siena showed Joe Biden with a modest 4% lead over President Donald Trump among likely voters. Fox showed Biden with a stronger 11% lead over Trump among likely voters. And more recently, online betting company BUSR and the UNLV Lee Business School released their own poll late last month showing Biden with a 5% lead over Trump.

Interestingly, the BUSR/UNLV poll had a sample with a plurality of Trump 2016 voters (38.95% Trump, 34.49% Clinton) and a sample that was slightly whiter than what exit polls showed in 2016 and 2018. By comparison, NYT/Siena’s sample hewed more closely to 2016 and 2018 turnout other than it also featured a slight plurality (37%-36%) of Trump 2016 voters, though it’s unclear whether they polled anyone in Spanish, Tagalog, or another language. And judging by Fox’s crosstabs, it doesn’t appear that they had some wildly heavily Democratic sample (and they did poll in English and Spanish, as did BUSR/UNLV).

So what does this all mean? Even if the 2020 electorate ends up more on less on par with 2018’s (CNN’s exit poll showed a Clinton 2016 +1% electorate that year), Trump still doesn’t seem any better positioned to win Nevada than he was four years ago.

Trump looks like he is gasping for air pic.twitter.com/4k2v4Jxlir

Ever since Governor Steve Sisolak ordered the first round of shutdowns on March 17, we’ve seen ample speculation from media pundits on how Nevadans would react. By and large, polls (see above) have shown Nevadans mostly supportive of proper public health measures and largely disapproving of Trump’s calls to “LIBERATE!” further spread of COVID-19. So why on earth are we still getting all these pundits’ “hot takes” on how “Sisolak’s shutdowns boost Trump in the Silver State”? Good question: We should really ask them.

Since the summer, we’ve seen ample pundit speculation on whether “Trump is doing better with Hispanics!” This is a prime example of #LazyPunditry, as pundits have cherry-picked certain polls, including those that may not poll in Spanish, and paid way too much attention to Republican spin artists rather than listen to las comunidades. It’s no secret that Joe Biden struggled to reintroduce himself to Latinx voters earlier this year, though Latino Decisions’ most recent tracking poll (released today!) shows Biden strengthening his lead over Trump among Latinx likely voters to 74%-23%. This is largely on par with the growing pile of “anglo/gringo” pollsters also showing Latinx subsamples that are less Trump-friendly than those earlier outliers.

To a lesser extent, we’ve seen the same spin in regards to African-American and Asian-American and Pacific Islander (AAPI) voters – again, because of the combination of limited and low quality polling alongside a heaping dose of silly spin. Please play closer attention to the bigger polling picture, and especially those outfits that put in the time and effort to properly sample communities of color, rather than just cherry-pick “anglo polls” and extrapolate based on small subsamples with higher margins of error.

What about “the ground game”?

Here’s where it gets tricky again. Since Republicans barely even paused their in-person campaign activities this spring, they’ve spent far more time and effort on the literal ground than Democrats this year. This, in turn, has birthed another round of “hot takes” where pundits praise “Trump’s strong ground game” and quote sometimes unnamed Democratic Party insiders who bemoan Biden’s “lack of a ground game”.

Here’s what’s really happening: Yes, the Trump-Republican machine is in full force with paid canvassers and some volunteers knocking doors. However, we’ve heard from multiple sources across the state who have indicated that even with the Trump campaign and the Nevada Republican Party out in the field, their field operation is just as messy now as it was in 2018 and 2016 (and 2012, 2010, and 2008).

So what about the Democrats? The Biden campaign, the Nevada State Democratic Party, and multiple down-ballot Democratic operations have been relying more on virtual phone banks and text conversations (some Democratic-aligned groups have actually been using Hustle’s text program since 2016) since they gave up traditional door-knocking earlier this year. The Culinary Union already relaunched its door-to-door canvassing last month, and the Biden campaign recently followed suit. And though we’ve occasionally caught whispers of technical glitches and other challenges earlier this cycle with their phone and text operations, overall it seems like Biden and the state party have since figured out how to make the virtual phone banks work.

While some very well connected Democratic Party insiders have publicly sounded alarms in recent weeks, that may be more due to the campaign’s center of political gravity jumping across the Colorado River than some severe risk of Nevada turning red this fall – as in, Democratic operations are putting more time and money into Arizona than Nevada for a change. While Democrats can never take this state for granted (remember 2014!), they also don’t need to panic (remember 2018!).

#TheyMatter: How does the election look next door in Arizona, and in the rest of the country?

Since we already discussed that New York Times/Siena poll of our state from last month, we might as well take a look under the hood of their new Arizona poll released yesterday. According to them Biden holds an 8% lead, Mark Kelly (D) holds an 11% lead over appointed U.S. Senator Martha McSally (R-Arizona), and Democrats are doing phenomenally well in this once “ruby red state” despite Siena’s seemingly bright red sample. Even if you’re inclined to think this NYT/Siena poll is way out of left field, the overall picture only looks somewhat less grim for Republicans, as the FiveThirtyEight Arizona polling average shows Biden with a 4%+ lead over Trump.

Looking at other key swing states, the FiveThirtyEight polling averages paint largely the same picture: Biden up 7%+ in Michigan, up almost 7% in Wisconsin, up 6%+ in Pennsylvania, up 3%+ in Florida, up just over 2% in North Carolina, and even ever so slightly ahead of Trump in Georgia and Ohio. As we zoom out some more to the national popular vote, FiveThirtyEight has Biden with an 8%+ national lead over Trump thanks to the NBC/Wall Street Journal (Biden +14%?!), CNN/SSRS (Biden +16%??!!), SurveyUSA and Data for Progress (both Biden +10%), and other national polls giving Biden some of his best numbers ever.

Do I expect Joe Biden to win the national popular vote by double digits? I still have a hard time buying that just yet, but this recent avalanche of polling data amidst Trump’s alarming debate performance and horrifyingly reckless behavior following his own COVID-19 diagnosis is pointing more and more towards a sizable Biden victory that’s at least on par with President Barack Obama’s historic 2008 victory.

Now with all that being said, what’s happening here in Nevada? Short answer: I’ve decided to keep the presidential race in Nevada as Likely Democratic despite Republicans’ recent voter registration gains and the ongoing “poller coaster” of disparate Nevada polls.

Longer answer: Even with Republicans’ more robust in-person field operations, it’s unclear whether they’re doing any better than Democrats besides them convincing Trump voters to register or re-register as Republicans. Yet now that Nevada has same-day voter registration, Nevada Democrats and their allies have rebooted their ground game for the COVID-19 era, growing evidence is pointing towards Biden finally solidifying his advantage among communities of color, and the recent avalanche of national polls (particularly from the higher quality pollsters) is suggesting that Biden is doing as well among nonpartisan/independent voters as Democrats did in 2018, it’s hard for me not to conclude that Biden will win Nevada by at least as much as Rosen and Sisolak did two years prior.

For more information on how to vote this year, check out the Nevada Secretary of State’s comprehensive site explaining our various options this year. If you’re already registered to vote at your current address and you voted in 2018, you will probably be mailed a ballot soon (if you haven’t received it already) thanks to AB 4 becoming state law in August. Once you receive your ballot, you can either mail it in or turn it in at a secure drop-off site. If you still need to register for the first time or update your registration, you can either register to vote online now or at a local voting site when in-person voting begins. And for more information on how to vote this fall, NBC News and The Washington Post have great resource guides to keep on deck.

I can't lie: I had a rough time in June. There was stuff going down in my personal life, and certain work matters (really, haven't you been reading here?) had occasionally gotten to me. It was time to
Read More 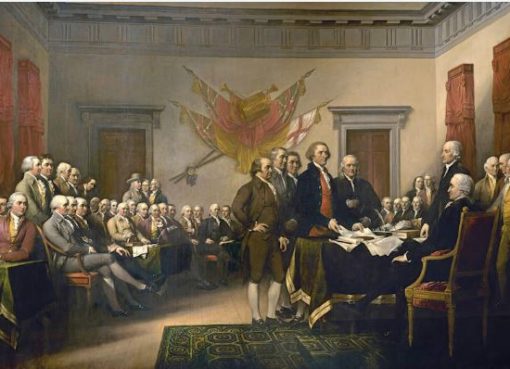 Let Us Remember: The Declaration of Independence

The Declaration of Independence is the sacred document of the United States of America whereby the 13 colonies stated on July 4, 1776 that they were no longer a part of the British Empire and instea
Read More