Donald Trump’s “Make America Great Again” insurgency [i] strategy began in 2015 and spilled over into a violent insurrection [ii] Wednesday.

On Wednesday afternoon, a mob of pro-Trump protesters stormed the U.S. Capitol, resulting in vandalized chambers and five deaths.

According to CNN reporters Eric Levenson, Amir Vera, and Mallika Kallingal, four people died during the attack on the U.S. Capitol. And one woman was fatally shot by police, and three people died of apparent medical emergencies.

The attack came in the middle of an ongoing vote to certify the 2020 presidential election results, and it sent both lawmakers and members of the press scrambling for safety.

First among equal in his attempt to over through our government is his self-aggrandizement and frequent lies about his achievements in demonstrably wrong ways and contrary to well-known and accepted facts.

As important, maybe more so, he uses right-wing sycophants in and out of government to subvert democracy and expand his powers.

Here’s a look at those six senators participating in the insurrection.

Hawley was the first senator to break ranks publicly last month and announce his plans to lodge objections during the joint session.

After thanking the U.S. Capitol Police for their efforts during the insurrection, Hawley defended his decision to object.

“I want to speak to the Republicans who are considering voting against these objections,” Cruz said Wednesday afternoon during the debate over Arizona’s Electoral College results.

“I urge you to pause and think, what does it say to the nearly half the country that believes this election was rigged if we vote not even to consider the claims of illegality and fraud in this election?”

Public opinion doesn’t dictate who should win an election or if there should be additional investigations into fraud, an allegation that state election officials and Trump’s own Justice Department have vehemently refuted.

Tuberville fulfilled the pledge he made Tuesday join Cruz in objecting to the results from Arizona. Tuberville, a retired football coach,  defeated Jeff Sessions, the former senator, and attorney general, in the GOP primary and went on to win against Democratic incumbent Doug Jones in November.

A former U.S. representative, Marshall defeated former Kansas Secretary of State Kris Kobach in the Republican Senate primary earlier this year and went on to win the Senate seat vacated by Pat Roberts. He secured endorsements from prominent Republicans, including McConnell.

Elected to the U.S. Senate in 2016, Kennedy has been a frequent defender of Trump.

“I came to the Capitol yesterday to give them a voice,” he said in a statement. “I joined several Senate colleagues in calling for a bipartisan commission to inspect election issues raised across the country. Our proposal was not successful, but our goal to ensure full confidence and transparency in our elections — for all Americans — is a noble one, and I’ll keep pursuing it.”

Hyde-Smith won her runoff election in 2018, becoming the first woman elected to the Senate from Mississippi. Critics hammered her for comments she made that surfaced during the campaign, including one in which she told a supporter, “If he invited me to a public hanging, I’d be on the front row.” She has been an ardent supporter of Trump while in office.

Here are the 121 House members who supported the objection: 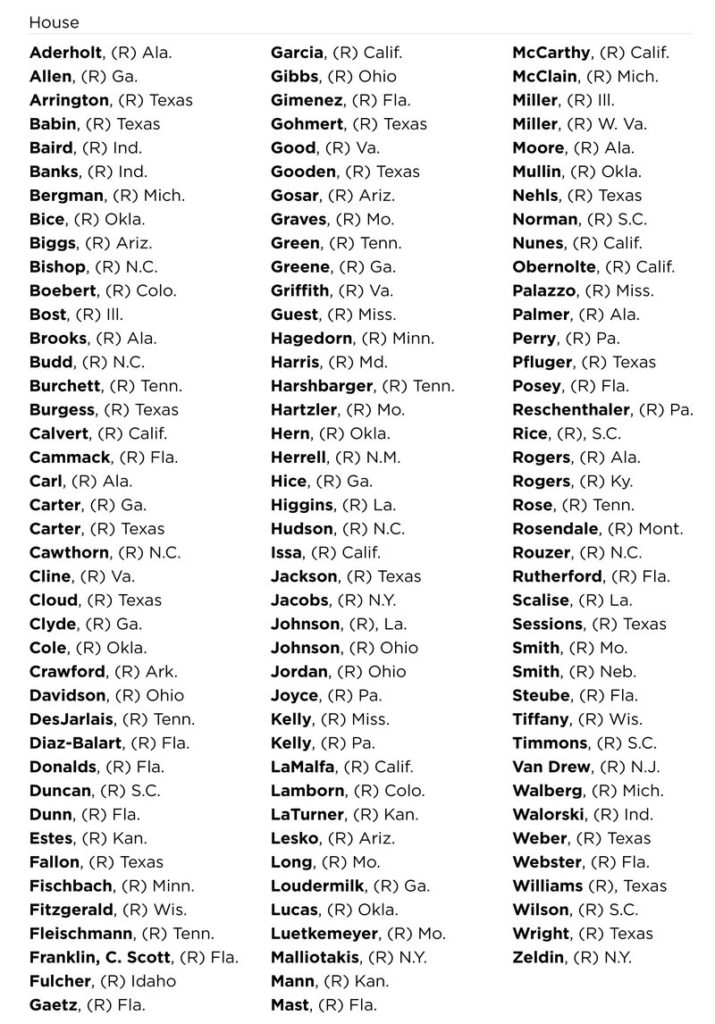 Black joins with Congressman Mo Brooks (AL-0 5), and other right-wing insurgents in participating in the insurrection and pushing the discredited idea that that ANTIFA snuck in with Trump supporters during Wednesday’s rally to provoke the mob.

Black added to the insurgency by saying that: “Many of us suspected that maybe it was Antifa agitators who had infiltrated the crowd and set this whole debacle in motion. And as the New York Post reported on Thursday.”

The Federal Bureau of Investigation said there is no indication that Antifa infiltrated the mob as of Friday. Furthermore, right-wing extremists have been identified in the crowd that stormed the Capitol, and CNN has seen no evidence whatsoever of a left-wing infiltration of the mob as of the publishing of this article.

Nevada Democrats are pushing for a criminal investigation into Black’s claims that she was not part of the mob engaging in criminal activity at the Capitol or if she participated in a criminal conspiracy in support of the insurrection.

[i] The official definition of an insurgency is the “organized use of subversion and violence to seize, nullify, or challenge political control” of an area. An “incipient insurgency” might be happening when “inchoate actions by a range of groups”—followed by organizing, training, acquisition of resources (including arms), and the buildup of public support—lead to “increasingly frequent” incidents of violence, reflecting “improved organization and forethought.”

[ii] a violent uprising against an authority or government.

This Week in Corona Scams: Inoculation vs. Indoctrination

This Week in Corona Scams, are we worried about the COVID-19 vaccines? Before you share that meme your uncle posted on Facebook, please review the actual science and see for yourself how these vaccine
Read More