This week has been nothing short of surreal. We’ve witnessed a social media behemoth get grilled in Congress, a President lash out on social media as authorities continue to investigate his campaign, a sitting Speaker of the House who announces his own retirement nearly seven months before the election, and reporting on all this and more by some media outlets that feels eerily Orwellian.

What do we make of all this? Below I present to you a play in five acts to illustrate and explain.

We’ve known for some time that Donald Trump is not a fan of special counsel Robert Mueller’s investigation into the Trump Campaign and the Russian government’s meddling in the 2016 presidential election. But now that Trump’s personal attorney and self-proclaimed “fixer” Michael Cohen is in the hot seat over his payments to Stormy Daniels and Karen McDougal (who have both accused Trump of pursuing sexual relationships with them), and whether those payments were essentially campaign contributions and part of a larger cover-up meant to boost Trump’s political fortunes. In case that’s not bad enough for the White House, Cohen may also be a person of interest in the case of the Trump Campaign’s relationship with Russian interests.

So, of course, Trump is apparently considering plans of action to shut down Mueller and his investigation. After coming close to attempting to fire Mueller last December, he’s now mulling firing Rod Rosenstein, the deputy attorney general who’s overseeing the Mueller investigation. If Trump proceeds to fire Mueller, Rosenstein, and/or Attorney General Jeff Sessions (who earned Trump’s ire by recusing himself from the Russia investigation), it won’t only lead to additional political danger for an already embattled Republican Party that’s struggling to defend its Congressional majorities, but it will also trigger a constitutional crisis that could test Republicans’ willingness to rein in a President seeking to undermine the rule of law.

Act Two: WTMF, or What’s the Matter with Facebook?

While the Mueller investigation continues to heat up, Congress is finally asking some tough questions about Facebook’s role in the Trump-Russia scandal. In 2015 and 2016, a then very under-the-radar consulting firm Cambridge Analytica received data on some 87 million Americans from a researcher who violated his own agreement to Facebook in order to get his payday. But wait, what does this have to do with Trump-Russia? Keep this in mind: Cambridge Analytica was founded with the help of the well-heeled conservative activist Mercer family, it was contracted by the Trump Campaign during the 2016 election cycle, and it has a rich history of doing business with Russian entities.

Even though Facebook itself didn’t provide the data to Cambridge Analytica, the Trump Campaign, or Russian hackers, this does fit into a larger pattern of Facebook spying on its own users and commoditizing user data. During the Senate’s hearing on Facebook and Cambridge Analytica yesterday, Senator Catherine Cortez Masto (D) pressed Facebook CEO Mark Zuckerberg about the company’s policies on collecting and sharing user data.

Senator Cortez Masto to Mark Zuckerberg: "I appreciate you being here, appreciate the apology, but stop apologizing and let's make the change." pic.twitter.com/yuLD8BeZZj

Senator Dean Heller (R) also questioned Zuckerberg, though his line of questioning was often thrown off by his assertions that Facebook sells user data. (It doesn’t. Rather, it sells advertising that’s targeted thanks to user data.) At least Heller isn’t alone, as several other Members of Congress have also struggled to ask about technology they don’t seem to understand very well. Meanwhile, Zuckerberg continues to defend the very “surveillance capitalism” business model that aided Cambridge Analytica’s mission to win the internet (and the election) for Trump.

This morning, yet another bombshell dropped that caused explosions across Capitol Hill. In a move that Rep. Mark Amodei (R-Carson City) apparently saw coming (maybe, kinda-sorta), House Speaker Paul Ryan (R-Wisconsin) announced his retirement from not only the Speakership, but also Congress overall. Though he often portrayed himself as some sort of “serious policy wonk who cares about the less fortunate among us”, his biggest accomplishments are the Trump-GOP Tax Plan that redistributes benefits from the working poor and middle class to the wealthy, and a blueprint for cutting health care access that the Trump administration is already pursuing.

Remember how we were just talking about how embattled Ryan’s majority has become? Well, now we can add Ryan’s own retirement to the growing list of signs pointing towards a big “Blue Wave” washing ashore this fall.

Though Amodei appears safe (at least for now), his fellow Nevada Republicans aren’t as fortunate. Heller continues to struggle in what will likely be a general election against Rep. Jacky Rosen (D-Henderson) for his Senate seat, and stateside Republicans are in just as poor shape. And yet, Heller and Co. show no signs of changing course any time soon.

Here’s where it gets personal me, and potentially very problematic for the health of our democracy. Since I occupy a tiny corner in our local media landscape, I naturally want to root for journalists. We’re not just “the fourth estate”, but we also serve as your eyes and ears deep in the halls of power. When you can’t get honest answers from your elected officials, it’s up to us to hold them accountable and find those answers for you.

This is why I’m disturbed when I see one local newspaper publish a story from their White House Correspondent that essentially provides cover for Trump’s . And if that’s not disturbing enough, another columnist for said newspaper is resorting to sexual insults to attack Robert Mueller. Oh, and did I mention that their “straight news” White House Correspondent is a conservative columnist, their Vegas-based columnist previously served as a Trump Campaign surrogate, and the newspaper owner is a right-wing mega-donor with close ties to the White House?

How America's largest local TV owner turned its news anchors into soldiers in Trump's war on the media: https://t.co/iLVtKRQycL pic.twitter.com/dMdSGellH3

Here’s where it gets even scarier: Not only do we have a local newspaper that seems more interested in pushing Trump’s talking points than reporting on what’s really happening, but we also have similar talking points being presented on TV. Did you notice the matching big red banners on top of the websites for NBC affiliate stations KSNV (Las Vegas) and KRNV (Reno)? That’s no coincidence. Rather, it’s the latest example of owner Sinclair Broadcast Group using its TV stations as vessels to promote its pro-Trump agenda. If you were wondering why the local news feels less local and more Trumpy, wonder no more… And consider yourself warned if/when that segment on the school board gets dropped to make room for “Bottom Line with Boris”.

Act Five: How Would You Like to End This?

In the nearly 15 months of writing about the Trump administration, I’ve gone back and forth between feeling like we’re living in the trashiest reality TV show imaginable and feeling like they’re subjecting us all to their own original scripted series. So maybe they’re trying to outdo “UnREAL”?

However, there’s a catch: This isn’t just a TV show. Rather, this is our country. The future of our democracy is at stake. What are we doing about this?

While it’s easy to feel powerless these days, we must remember that our choices give us our power. How is it that internet companies get away with treating our data as their property? What exactly are our Members of Congress are holding this White House accountable? Why does it seem like that local news outlet is providing neither “local” nor “news”? If we don’t like what’s going on, we can choose to exercise our power through our ballots and our wallets.

So will we? Well, that’s for you to answer. And on that note, end scene.

Don’t Make the Same Mistakes Again: How Can We Combat Weapons of Mass Distraction?

Last night in Orlando, President Donald Trump promised to “Keep America Great”... And to cure cancer, “eradicate AIDS”, and guarantee that American astronauts land on Mars. This comes from someone who
Read More 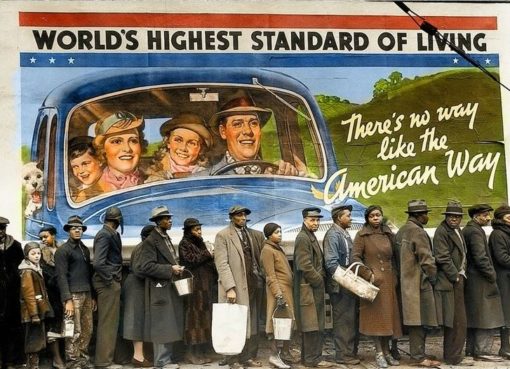 It deserves repeating: "Watch what they do, not what they say." David Smith,[i] of the Guardian, opines on Trump’s policy actions during his firs year in the following areas: Environment Taken
Read More

We Need More Than Mere “Growth”. We Also Need Maturity.

For decades, Nevada’s unofficial official motto has been “growth begets growth”. We were told that whatever suits the “growth industrial complex” is whatever we must do. And for the longest time, we w
Read More