Multiple factors are thought to be involved in triggering migraines.  Studies have shown that deficiencies of the micronutrients magnesium, riboflavin and coenzyme Q10 (CoQ10) could play a part in migraine pathophysiology (Gaul, Diener & Danesch, 2015).  Decreased levels of these micronutrients have been shown in the brain and plasma of migraine patients, which are all fundamental for the production of energy in the mitochondria (Gaul, Diener & Danesch, 2015).

The costs of prescription medications and the risk of adverse effects leans to a need for treatments that are effective and that come with less side effects (Guilbot, Bangratz, Abdellah & Lucas, 2017).  There is an increased interest in the use of non-pharmacologic options to treat migraines, which include supplements of vitamins, mineral and herbal treatments (Guilbot, Bangratz, Abdellah & Lucas, 2017).  Based upon the studies, supplementation of any of these micronutrients could prove beneficial and serve as a treatment for people that can’t tolerate or are contra-indicated to prescription medication (Gaul, Diener & Danesch, 2015).

One consistently favorable therapeutic approach to treating migraines is with the supplement CoQ10.

Studies supporting the use of CoQ10

A “vitamin-like compound,” CoQ10, an electron-carrier, is required for all cellular actions that require energy (Gaul, Diener & Danesch, 2015).

Coenzyme Q10 (CoQ10) plays an important role of maintaining energy stores in the mitochondria and recent research suggests that a cause of migraines may be a deficiency of mitochondrial energy in the brain (Guilbot, Bangratz, Abdellah & Lucas, 2017).  Endothelial dysfunction can be counteracted with CoQ10, which stimulates the release of nitric oxide and provides anti-inflammatory actions (Guilbot, Bangratz, Abdellah & Lucas, 2017).

Studies have consistently demonstrated that supplementing with CoQ10 for a period of three months has reduced the severity and occurrence of migraines in patients.  In an open label trial of participants supplementing with CoQ10 for migraine prevention, there was a statistically significant response to treatment by a reduction of the average number of days with a migraine from 7.34 days at the beginning of the study to 2.95 days after three months of therapy (Rozen, et al., 2002). After one month of treatment, the mean reduction of migraine frequency was 13.1%, which increased to 55.3% by the end of the three months (Rozen, et al., 2002).  Frequency of attacks went from 4.85 at the beginning of the study to 2.81 at the end of the three months, signifying that CoQ10 is a good treatment in migraine prevention (Rozen, et al., 2002).

How much CoQ10 should I use

In children and adolescents with a CoQ10 level below the reference range, supplementing with 1-3 mg/kg each day for three months improved both migraine frequency and level as well as CoQ10 serum level (Guilbot, Bangratz, Abdellah & Lucas, 2017).

In a test group of thirty-one patients with histories of episodic migraines who supplemented CoQ10 at 150 mg/day for 3 months, 61.3% experienced more than a 50% reduction in the number of days with a migraine (Rozen, et al., 2002).

Supplementing with CoQ10 may provide a safe and favorable therapy for the prevention of migraines in children, adolescents and adults.

Gaul, C., Diener, H. & Danesch, U. (2015). Improvement of migraine symptoms with a proprietary supplement containing riboflavin, magnesium and Q10: a randomized, placebo-controlled, double-blind, multicenter trial. The Journal of Headache and Pain. 16:32. https://thejournalofheadacheandpain.biomedcentral.com/track/pdf/10.1186/s10194-015-0516-6 (Links to an external site.)Links to an external site.

Guilbot, A., Bangratz, M., Abdellah, S.A. & Lucas, C. (2017). A combination of coenzyme Q10, feverfew and magnesium for migraine prophylaxis: a prospective observational study. BMC Complimentary and Alternative Medicine. 17:433. Retrieved from https://bmccomplementalternmed.biomedcentral.com/track/pdf/10.1186/s12906-017-1933-7 (Links to an external site.)Links to an external site. 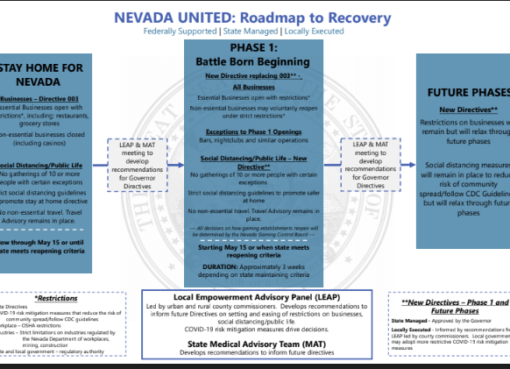 Bio-TerrorismCOVID-19HealthNews and informationThe Economy
May 4, 20200719

Surf’s Up: “Blue Wave” Hits Arizona. Is Nevada Next?

Culinary Union and UNITE HERE Call for “Bailout of the American Worker, Not Just Industry” As COVID-19/Coronavirus Crisis Mounts

On a call with reporters from across the nation, Culinary Union and UNITE HERE union leaders acknowledged the stark new world of novel coronavirus and COVID-19, where social distancing is our “new nor
Read More