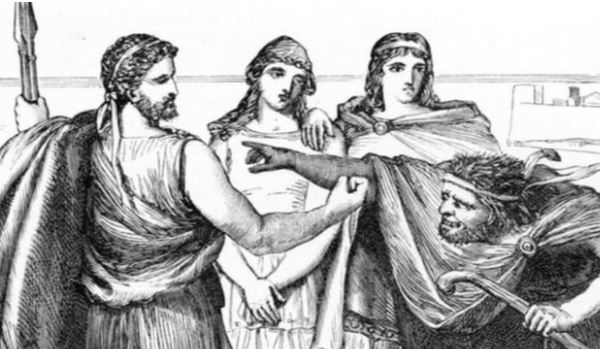 During the Dark Age of Greek history, Waring Chiefs were required to hear the opinions of their followers.  Agamemnon, the arrogantly self-important leader of the Greek army besieging Troy (c 1194-1184 BC), summoned his troops to announce his decision to prolong the war then in its 10th year. Thersites, an ordinary soldier, fiercely criticized Agamemnon for his greedy, self-righteous behavior.  In response, Odysseus, another Chief, immediately rose to support Agamemnon, saying to Thersites, “If ever I find you being so foolish again may my head not remain on my body if I don’t strip you naked and send you back to your ship crying from the blows I give you. Odysseus thereupon hit Thersites with a blow to his back, which drew blood. (Iliad 2, lines 211-277).

Mesquite, NV. On Tuesday,  the Mesquite City Council met to consider, among other things, the appointment of a new city manager.

As I listened to the discussion, the passage from Homer’s Iliad cited above came to mind. Mayor Al Litman took the role of Agamemnon. Councilman George Rapson acted as Odysseus, and Councilperson Sandra Ramaker took on the soldier’s role of Thersites.

More than two years ago, Litman (Agamemnon) publicly announced that his hand-picked replacement for the City Managers position when it became available was employee Aaron Baker. On Tuesday, Litman made the inglorious comment that after reviewing the applications he has decided to appoint Aaron Baker as the new city manager.

Ms. Ramaker, as Thersites told the assembled public that she knew that Baker was the heir apparent for the City Manager position. She said she liked Baker, but she felt a better qualified candidate had come forth.  She went on to outline the candidate’s qualifications, which clearly put Baker in a distant second.

The other soldiers on the Council: George Gault, Brian Wursten, and George Rapson (Odysseus) fell in line with accolades about Baker and announced their support for Agamemnon’s (the Mayors) appointment. Councilperson Annie Black was absent and ingloriously avoided the issue.

The final comments on the appointment came from Rapson as Odysseus who verbally whipped Ms. Ramaker by making unfounded aspirations about her candidates’ qualification and arguing that her selection was not qualified. He said that he liked Baker because he (Baker) knew where the bones were buried.

The Mayor, Councilmen Gault, Wursten and Rapson want to keep the bones buried and benefit from the same city path they have been traveling on for the past decade just as Agamemnon wanted to continue benefiting from the Siege on Troy.

In a nutshell, that means advancing economic growth based upon a cyclical housing market, continuing line item budgets without considerations of performance outcomes, hiring an outside lobbyist to represent the city when a new city manager could do that job, and most importantly improving our relationship with the Spanish speaking community.

Its time for a fresh new look and Council lady Ramaker knows that. And she was correct in her support for a new city manager. Regardless, she has pledged to work with Baker but will hold him accountable for the promises he made to her during their interview.