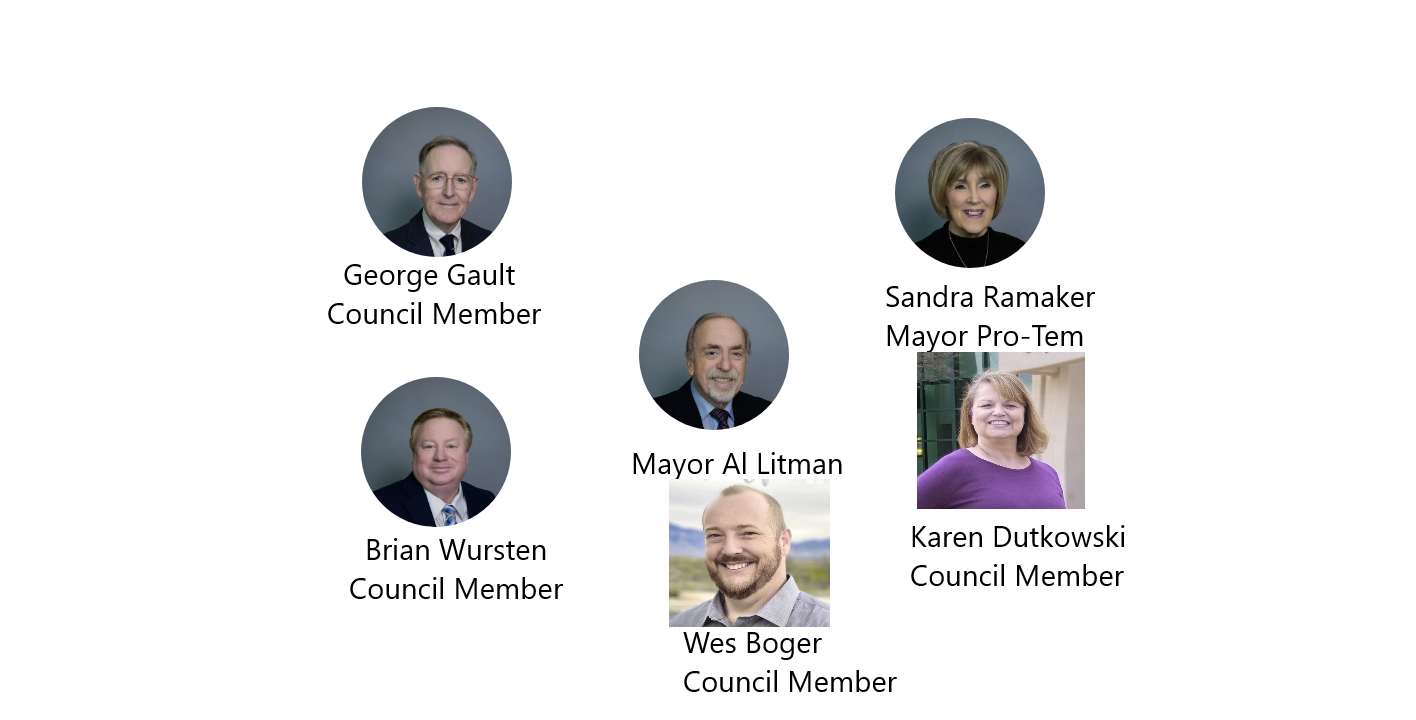 Michael M. McGreer, Ph.D., who retired to Mesquite in 2006 from the Department of Interior, Washington D.C, and acting for the MesquiteWaterAlliance.com briefed the Council on the status of local water sustainability and availability during a drought. 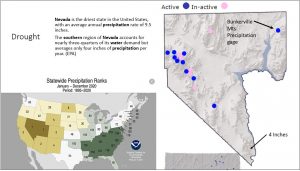 He pointed out that the southern region of Nevada accounts for nearly three-quarters of the State’s water demand and averages only four inches of precipitation per year. However, rainfall in the local areas, including Lake Mead, is ordinarily insufficient for recharge due to high evapotranspiration rates. [i]

The local Basin, he said, is experiencing the lowest 16‐year period of inflow in over 100 years of record‐keeping, and reservoir storage in the Colorado River system has declined from nearly full to about half of capacity. [ii] 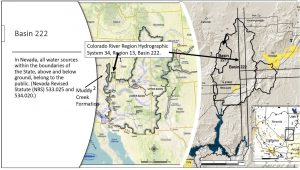 Underground water is currently the single source of the five sources of water appropriated from the local Basin (222), McGreer said. Other sources include spring water from local mountains, surface water from the Virgin River, and effluent. The fifth source is precipitation monitored by the Bureau of Land Management.

In discussing underground water, McGreer argued that it is not the size, geology, or even the hydrology of the Basin that counts.  It is the amount of water available and sustainable for our use that matters.

McGreer pointed out two different metrics used in measuring underground water. The first is the perennial yield which cannot be more than the groundwater reservoir’s natural recharge and is usually limited to the maximum amount of natural discharge.” The second is the amount of water appropriated for beneficial use.

“It is the general policy of the State Engineer to limit groundwater withdrawals from a  basin to the average annual recharge to the groundwater basin or its perennial yield.”

On January 30, 2018, during a Nevada water Law Summit, King said that: “Most (Basins) was already over appropriated before the Perennial Yield (P.Y.) being established.” He noted that “Popular thinking that not all rights would be put to their maximum beneficial use, so it was acceptable to over‐appropriate,” McGreer noted.

McGreer told the Council that on July 25, 2017, Timber Weiss, a water resource specialist for the Division of Water Resources, warned the Virgin Valley Water Board that the perennial yield from local Basin 222 is only 3,600 Acre Feet Annually (AFA).

Basin 222 is a sensitive area, McGreer said, pointing out that in 1980, Nevada Water Engineer William J. Newman recognized that water appropriation on Basin 222 is more than the perennial yield and designed it as a critical management area. And under Nevada water law, If a groundwater basin is a critical management area for at least ten consecutive years, the State Engineer is required to order that withdrawals, including withdrawals from domestic wells, be restricted to conform to a priority, he added. 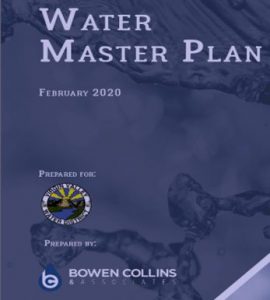 And in 2019, Governor Steve Sisolak, D, signed SB150 requiring a county or city government to develop a water resource plan. SB150 does allow a local water district to plan for water sustainability and availability. 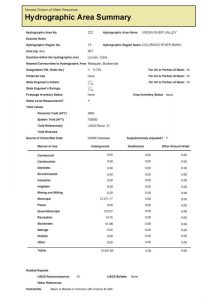 Specifically, the plan lacks any mention that the existing water budget established by the Nevada Water Engineer puts the perennial yield at 3,600 AFA yearly yield and reports 12,547.95 AFA of over appropriated underground water.  http://water.nv.gov/UndergroundActive.aspx.

McGreer points out that while the appropriated amount equaled 2,271 AFA,[v] the water districted projected developing underground sources over the perennial yield and the permits, especially during peak day demands. [vi]

Without a conjunctive management study or a Nevada Water Engineer-approved water budget, these projected overages are problematic.

Yet lacking a study to confirm water availability, the Virgin Valley water Board tells the public in their master plan that they will develop new wells to deliver an additional 12,075 AFA of water unpermitted or certified at a cost above $38 million.

On July 27, The Mesquite City Council received an Economic Development report from Cody Long. In that report, Brown issued a water availability report. In that report, Brown said that the Virgin Valley Water District “will be able to satisfy all water requirement for development of two in the cities Technology and Commerce Center.”  That is not entirely true.

A closer reading of the letter shows that Brown admits that “The district is the water purveyor for this area and issues conditional commitments.”

The ability to deliver water is not the same thing as determining water availability and sustainability. That is the job of the Nevada Water Engineer. And a water budget confines water delivery to any amount less than or equal to the perennial yield or an allocation.

During Tuesday’s meeting, the City Council approved the sale of approximately 4.16 acres of a 17.69-acre city-owned property for Economic Development Purposes. They also approved the Development Contract for Virgin Valley Pioneer Park between Dixie and Anne Leavitt Family Foundation and the City of Mesquite.

And the Majority voted to consider a tentative Map Case No. TM-21-005 for the Dusty Rose Subdivision covering 51.32 acres for 159 single-family residential lots and common open space areas. Councilwomen Ramaker voted against it.

The community is at a crossroads in economic development. For years, the city council, aided and abetted by the water board, pushed growth over water sustainability and availability. As far back as 1980, the Nevada water Engineer considered Basin 222 a critical management area and believed it over appropriated.

Current state laws required that the city have a water plan that conforms to a Nevada Engineer approved water budget supported by a scientifically based conjunctive study. Such a plan does not exist. And the current water district plan makes projections far over the present hydrographic study for Basin 222.

Mesquite Water Alliance (MWA) (mesquitewateralliance.com) is a nonprofit (501 C3 pending) corporation that performs water policy research. We sponsor discussions covering all appropriated, demanded, and supplied water sources flowing within the Lower Colorado River Basin in Virgin Valley. That area includes the communities of Mesquite and Bunkerville, which draws their water from Basin 222.

Mesquitewateralliance.com offers educational materials, water news, and speakers for local interest groups upon request.  By providing opportunities for engagement, it is our goal to find community-based solutions to sustain local water now and in the future.

[ii] “Drought in the Colorado River Basin, at: https://www.doi.gov/water/owdi.cr.drought/en/)

[iv] A water budget is a hydrological tool used to quantify water flow in and out of a system. In other words, it is an accounting of all water. And under NRS 533.024, setting that budget and managing water conjunctively is the responsibility of the Nevada Water Engineer.

While tongues are still wagging over the passage of SB 143 to end the six-year saga over Nevada’s background check loopholes, there are more gun violence prevention bills still pending in the Legislat
Read More 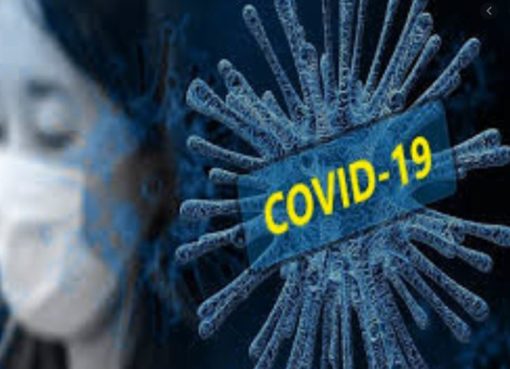 Authors Note: When Dark Winter was conducted, I had taken a leave from the Department of Interior to return to my previous work with The Department of Defense to help establish the Office of Chief Inf
Read More

On March 27, Las Vegas ICE (Immigration and Customs Enforcement) agents arrested and detained Cecilia Gomez during what was supposed to be a routine appointment. Gomez has since come forward with her
Read More