Last week, the Las Vegas City Council garnered national attention for an ordinance establishing more of a “tough on crime” approach to homeless encampments. This came hot on the heels of San Francisco’s and Seattle’s respective municipal elections that may result in a major sea change in their approach to both criminal justice and social justice.

So what’s the common thread here? Hang on, as we’re about to travel the country to bring this home.

First off, we have an update on last week’s election results

In Kentucky, incumbent Governor Matt Bevin (R) has refused to concede after semi-final returns show Attorney General Andy Beshear (D) holding onto a 5,189 vote lead (or 49.19%-48.83%) over Bevin. But now that U.S. Senate Majority Leader Mitch McConnell (R-Kentucky) and other prominent Kentucky Republicans are signaling acceptance of Beshear besting Bevin fair and square, it’s looking more likely that Bevin’s ongoing protests will ultimately have to give way to his transfer of power to Beshear.

Yet while the Kentucky results stand, the numbers have been changing pretty dramatically in Washington State. After appearing to lose her seat on the Seattle City Council, incumbent “Socialist Alternative” Council Member Kshama Sawant has pulled ahead by 1,515 votes (51.57%-47.95% as of Friday night) after early returns showed her falling behind challenger Egan Orion by as much as 8%. Now that most of Seattle’s ballots are in and counted, progressive activists appear to have secured a supermajority on the council despite Amazon spending $1.45 million to elect Orion and other “pro-business” (read “pro-Amazon”) candidates.

And now that Sawant will likely return victoriously to City Hall, the new Seattle City Council will probably have the votes to try new progressive policies on issues like sustainable development and social services for the homeless and others facing extreme poverty… As well as retrying a tax on Amazon and other high-grossing corporations in order to fund a better social safety net.

What else is happening elsewhere?

Across the nation, state and municipal governments are struggling to figure out how to develop amidst higher real estate prices, higher economic inequality, and higher carbon emissions. On the other side of Primm (or for folks up north, Tahoe), California frequently makes international headlines for its housing crisis, and beneath those flashy headlines are additional stories of municipal governments having to choose whether to get “tough on crime” or pursue a more holistic approach to “quality of life issues”.

Nationally, the number of Americans experiencing homelessness has increased for two consecutive years. However, that picture is more complicated than the toplines suggest. In places like New York City officials have stepped up their efforts to provide shelters and transitional housing, while others (see above) are only now trying to catch up with the mounting crisis on their cities’ streets.

As we all now know, the Las Vegas City Council voted 5-2 last Wednesday to pass a new ordinance banning streetside camping in most Downtown neighborhoods. Until very recently, Nevada’s sketchy record on social services, public infrastructure, and the “growth-industrial complex” had mostly been one of those “worst kept secrets” that activists and policy wonks lament while politicians actively ignore. But this time, it’s different: This one city ordinance has suddenly and loudly made national headlines.

When multiple Democratic presidential candidates, including former HUD Secretary Julián Castro and U.S. Senators Elizabeth Warren (D-Massachusetts) and Bernie Sanders (I-Vermont), speak out against this specific initiative while incumbent President Donald Trump threatens some kind of “war on the homeless”, this may be one instance where Nevada’s “First in the West” Presidential Caucus actually results in a critical issue gaining national attention.

But as we’ve been saying around these parts for some time, this was a problem long before the 2020 presidential candidates weighed in. And once again, local officials seem to prefer maintaining the status quo as others have already begun pursuing more humane alternatives. While Kern County may soon embark on a criminalization regime along the lines of what the City of Las Vegas is doing, most other urban jurisdictions are taking a vastly different approach.

And the City Council may not have the last word, as the Ninth Circuit Federal Court of Appeals has already ruled that cities in its jurisdiction can not impose criminal penalties on homeless people if there aren’t enough shelter beds available for them to get off the streets (see above, specifically what’s happening in Orange County). This may be a reason why local advocates for the homeless are considering a lawsuit to challenge Las Vegas’ new ordinance. But in the meantime, people suffering from homelessness are left to navigate the criminal justice system while politicians keep arguing over a crisis we’ve been ignoring for far too long.

Ammon Bundy's far-right anti-government movement is expanding, according to The Institute for Research and Education on Human Rights (IREHR) and the Montana Human Rights Network. According to IREHR re
Read More 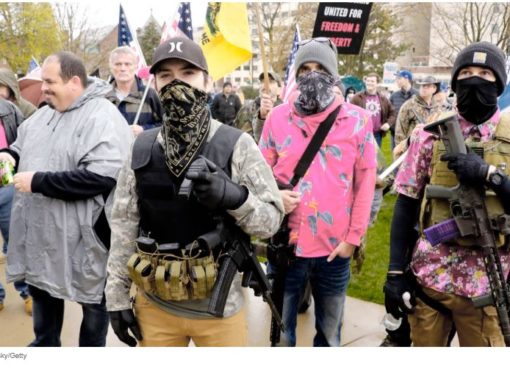 Bio-TerrorismCOVID-19HealthNews and informationThe Economy
May 1, 202002048

Today kicks off a holiday weekend, and tomorrow kicks off early voting for the 2018 primary. Below, you'll find everything you need to go out and make your voice heard. Get ready, because democracy is
Read More