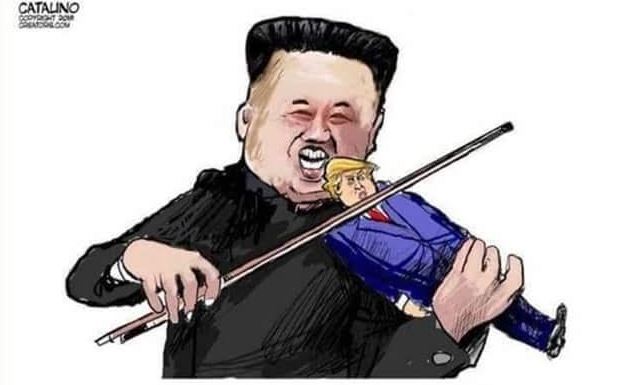 Donald Trump’s retreat from U.S.-South Korea military exercises (Ulchi [i] Freedom Guardian) increases Russian President Vladimir Putin’s strength with leaders on both sides of the Korean Peninsula, along with China and Japan.

During the Eastern Economic Forum held in Vladivostok, Russia in September 2017, Putin and Japanese Prime Minister Shinzo Abe attended a judo tournament together. South Korean President Moon Jae-in, expressed his admiration for Putin and emphasized the importance of economic cooperation between their two countries. [ii]

China[iii] is North Korea’s most important trading partner and the main source of food and energy. Russia is the source of uninterrupted energy for Japan and South Korea. While Trump disrupts our democratic relationships with Asian and European partners, Kim works both of the most powerful communist nations (Russia and China) in the world today.

Siberia holds large quantities of natural gas and oil. Kim’s modernization of its rail link through Siberia to Moscow reduces the energy and food monopoly China has over his dictatorship.

Both Kim and Putin are working to improve the 10,272 km (6,383 miles) Moscow-Pyongyang rail connections that connect over the Friendship Bridge, over the Tumen River, along with North Korea’s 17 km (11) mile border with Siberia. Improving rail links between North Korean allows goods (including military supplies) to travel between the two countries in half the time it takes to transport freight from eastern Asia to Europe.

Kim knows that Vladivostok, 113 km (70 miles) from the border of North Korea, is the home of the Russian Pacific fleet. Vladivostok is also a major rail and seaport links to the Chinese Eastern Line. That line crosses into China, passing through Harbin, a major city in Manchuria.

Kim continues to increase his ties to Chinese President Xi Jinping, while Trump accelerates his trade war with China. On Tuesday, the Kim and Xi Jinping met, for the third time since March. They are expected to discuss last week’s nuclear summit and Trump’s trade disputes with China.

In just 17 months, Trump has alienated our European allies and estranged the U.S. from Canada and Mexico. At the same time through tariff wars and military withdrawals, he is strengthening Putin’s power in the Korean peninsula and with Japan while replacing the US with China as the world’s number one economic powerhouse.

The end results of Trump’s “Make American Great Again” is to hand economic, technological and military dominance over to communist dictatorships.

[i] [i] Ulchi as a language Noun has categories of person, endangered languages of indigenous people of Siberia

[ii] Lundstrom, Magnus, “Why Are US Allies Japan and South Korea Drawing Closer to Russia?” https://goo.gl/Rqfo3o

OPINION: This Labor Day, Let’s Commit to Build Back Better

A Community Op-ed Submission By Vince Saavedra Nearly a century ago, ground broke on the construction of the Boulder Dam. Later renamed the Hoover Dam, the massive project brought thousands of c
Read More

On the Water Front: Dripping ‘Til the Last Drop

There's been quite a lot happening on the water front lately. On one end of the state, March delivered just enough of a miracle to keep the taps running smoothly. But on the other end of Nevada, we’re
Read More

Get Fit With Silver Sneakers

Mesquite, (NV). March 28, 2018. A couple of years ago, if you had asked me about “Silver Sneakers” I would have thought that it was just another stupendous but fictitious invention by Marvel Comics co
Read More