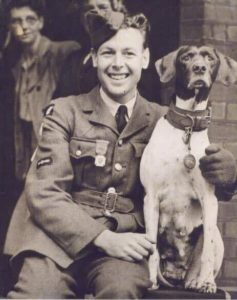 Judy, a purebred pointer, was the mascot of several ships in the Pacific, and was captured by the Japanese in 1942 and taken to a prison camp. There she met Aircraftsman Frank Williams, who shared his small portion of rice with her.

Judy raised morale in the POW camp, and also barked when poisonous snakes, crocodiles or even tigers approached the prisoners. When the prisoners were shipped back to Singapore, she was smuggled out in a rice sack, never whimpering or betraying her presence to the guards.

The next day, that ship was torpedoed. Williams pushed Judy out of a porthole in an attempt to save her life, even though there was a 15-foot drop to the sea. He made his own escape from the ship, but was then recaptured and sent to a new POW camp.

He didn’t know if Judy had survived, but soon he began hearing stories about a dog helping drowning men reach pieces of debris after the shipwreck. And when Williams arrived at the new camp, he said: “I couldn’t believe my eyes! As I walked through the gate, a scraggly dog hit me square between the shoulders and knocked me over. I’d never been so glad to see the old girl!”

They spent a year together at that camp in Sumatra. “Judy saved my life in so many ways,” said Williams. “But the greatest of all was giving me a reason to live. All I had to do was look into those weary, bloodshot eyes and ask myself: ‘What would happen to her if I died?’ I had to keep going.”

Once hostilities ceased, Judy was then smuggled aboard a troopship heading back to Liverpool. In England, she was awarded the Dickin Medal (the “Victoria Cross” for animals) in May 1946. Her citation reads: “For magnificent courage and endurance in Japanese prison camps, which helped to maintain morale among her fellow prisoners, and also for saving many lives through her intelligence and watchfulness”.

At the same time, Frank Williams was awarded the PDSA’s White Cross of St. Giles for his devotion to Judy. Frank and Judy spent a year after the war visiting the relatives of English POWs who had not survived, and Frank said that Judy “always provided a comforting presence to the families.”

When Judy finally died at the age of 13, Frank spent two months building a granite and marble memorial in her memory, which included a plaque describing her life story. 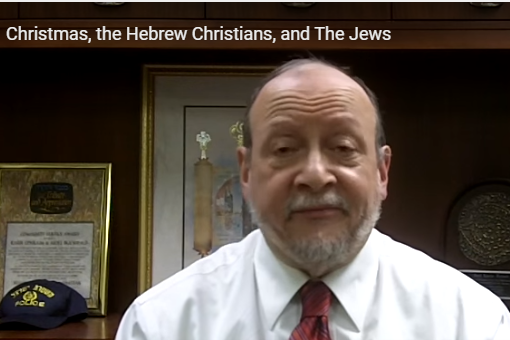 Rabbi Ehraim Buchwald Reports In During The Season of Holidays

It's in between Christmas and New Years in the Christian world and the secular world, and it's hard to believe that Chanukah was just a couple of weeks ago--it seems so long ago. Rabbi Buchwald R
Read More

Ready to hit the road again with me? If so, buckle up, because we're in for a wild ride in the city. And hang on, because we're also making our way to the country... Wine Country, that is! (more&he
Read More

Moments ago, Governor Steve Sisolak (D) declared, "We have developed a sustainable, targeted response model" to tackle our ongoing and still severe COVID-19 outbreak. So what is it? Basically, the sta
Read More