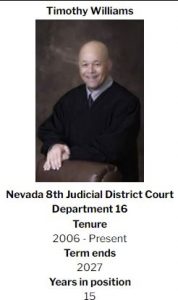 Las Vegas District Court Judge Timothy Williams has again ruled in favor of the Paradise Canyon (DBA Wolf Creek Golf Club) and against the Virgin Valley Water Board (VVWB) in a three-year-old civil case (No. A-18-774539-B). This ruling dealt with the right of the golf course owners to send small amounts of irrigation water to adjacent Master homeowners associations (M-HOAs).

Ignoring the high-value SNWA puts on converted river water, the Water Board proposed to increase the golf course river water used for irrigation rate from $250 per share to the $1,246 [i] rate, now reduced to $1,115.00 per share. According to attorneys for Paradise Canyon, the market value for highly polluted irrigation water is $300 per share. In addition, the VVWB moved to “claw-back” irrigation shares from the Golf Course, which they claim are unused to lease to SNWA.

There is no dispute that the owners of Wolf Creek own the irrigation system, all the pipes, and pumps serving the golf course and adjacent Master Home Owners Associations (M-HOAs). In addition, the water district does not regulate nor provide water to the Golf Course. That is the responsibility of the Mesquite Irrigation Company (MIC). The VVWB collects rent by sub-leasing water shares they acquired from MIC to the golf course owners or the SNWA.

When the owners of the Golf Course did not voluntarily amend the Lease and return shares, the VVWB, through their attorney Jedediah (Bo) Bingham, accused them of breaching the Lease, justifying cancellation and forfeiture of their lease rights.

The civil action is narrow in scope. The attorneys for the golf course owners seek a jury ruling acknowledging that the Covenant of Good Faith and Fair dealing applied to the pricing of irrigation shares. And they contend that comparing the value of culinary water converted from the river to highly polluted river water for irrigation violates that Covenant.

It appears that Bingham has conceded the Covenant and pricing argument. Instead, he continues to argue that the owners of the golf course violated the Lease. Therefore it is null and void. And the water board has an absolute right to set the rate at any price they want. He is not arguing the application of the Covenant nor the inequality of the water pricing.

It appears, for now anyway, that Judge Williams is not having Bingham’s distractions. He dismissed Bingham’s claimed that the VVWB had absolute authority to set prices at whatever rate they desired. He ruled that a jury will decide if the VVWB violated Nevada’s Covenant and Good Faith law.  That ruling attempted to put the case back on its intended track, i.e., good-faith pricing.

Judge Williams also rejected Bingham’s motions to dismiss the case for an alleged contract violation claiming that the golf course owners were required to use city-managed effluent before using river water for irrigation. In that motion, Judge Williams noted that the “conduct” of Water Board officials” resulted in a waiver of such condition. Therefore, the failure to use available recycled or effluent water was an immaterial provision under the Lease.” That took that side-show out of contention.

Not so, Judge Williams says.  In the sub-lease ruling, Judge Williams said that the contract does not prohibit Paradise Canyon from using a small fraction of the leased Irrigation Shares to irrigate the common areas adjacent to its golf course.

According to the Judge, the Lease does address and prohibits the sub-leasing of Irrigation Shares. However, the Judge pointed to “uncontroverted evidence” that the Virgin Valley Water District (VVWD) had noticed, was aware of, and accepted the water use arrangements in 2011, 2012, and 2014. Judge Williams noted that the VVWD inaction resulted in a waiver, even if the water usage prohibition was a material term in the Lease.

The “inaction” comments seem to follow a stream of consciousness expressed by the Judge in the effluent motion and seem to signal that Bingham should keep his arguments within the confines of the case itself.

In the latest motion hearing, dealing with a perpetual right to the lease, Bingham attempts to argue that the contract he drafted is unenforceable. That statement caused Plaintiffs attorney Jeff Sylvester to ask: “Did Bingham draft a provision that he knew was unenforceable?” That is counterintuitive?” Sylvester said.

Bingham contends that the owners of Wolf Creek did not notify the water board of their intent to renew their Lease within 60-days and failed to pay the required fee on time. He further argues that the Lease only allows the golf course owners a right of first refusal, which the water board can ignore at their discretion, adding that the water board declared the Lease null and void.

Sylvester said that the water board knows that the golf course owners have Leased all the shares and paid a rent fee since at least 2005. He added that any delay occurred during the Governor’s shutdown to deal with the COVID-19 Pandemic.

It appears Sylvester has had enough of Bingham. In this hearing, he argued that Bingham has lied to the Judge some 150 times during motion hearings while improperly adding 25 new cases and new arguments and different legal theories during his lengthy oral presentations.

Judge Williams has yet to rule on the “perpetuity” issue. And Williams will hear at least four more motions. The next one at 1:30 p.m. on July 21. A jury trial currently is set for January 24, 2022.

In the last 24 hours, President Donald Trump has privately and publicly suggested his desire to take a more aggressive approach… To roll back and discredit the emergency measures that federal, state,
Read More

Editors Note: On April 25, 2018, Barbara Ellestad, a former member of the Virgin Valley Water Board (VVWB), wrote an article in the Mesquite Local News. In the article, she talked about an amendmen
Read More