Remember that presidential election when Nevada was roughly a two-point race, Wisconsin showed a razor-thin margin, Republicans tried but failed to pick off blue states like Minnesota, and Democratic hopes of a blue Ohio got crushed? Yes, a whole lot of this describes what happened in this 2020 election, but it also describes what happened in 2004 – the last time an incumbent Republican president ran for reelection.

Today in Hindsight 2020, we’re enjoying a blast from the past as we uncover how the political landscape has changed over the past two decades, along with the clues from back then that help illustrate the current state of play.

Democratic presidential candidates have won Nevada in the last four consecutive election cycles. The last time Nevada went red was in 2004, when then President George W. Bush won Nevada by a clear but narrow 2.59% over then U.S. Senator John Kerry (D-Massachusetts).

Nationally Bush won the popular vote by 2.46%, and he secured 286 votes in the Electoral College thanks to a series of controversial events in Ohio. Yet amidst the Kerry campaign’s and other top Democrats’ near-singular focus on Ohio, then U.S. Senator Harry Reid (D) and other western Democrats tried to get them to notice something: If Kerry had just made up his just under 128,000 vote deficit in Colorado, New Mexico, and Nevada (just a little more than Bush’s ultimate 118,000+ vote win in Ohio), Kerry could have secured 271 Electoral College votes without having to go all in on Ohio.

This may be hard for younger political junkies to imagine, but back in the early-to-mid 2000’s, the political map and the electoral math looked different. Back then, Democrats were still reeling from “The Solid South” converting from solidly Democratic to solidly Republican. Yet while Republicans were starting to get frustrated over the three big West Coast states (California, Oregon, and Washington) becoming as Democratic-leaning as most of the Northeast, they were nonetheless heartened by their firm grip over the Mountain West. And of course, the stretch of the Upper Midwest and Pennsylvania that had been dubbed “The Rust Belt” was the ultimate political battleground.

As the old saying goes: History may not always repeat itself, but it does tend to rhyme.

Here in Nevada, Bush won thanks to winning all but one county. Of course, the one county that Kerry won was Clark County. However Kerry’s margin in Clark County was only 4.84%, and that was slightly worse than Al Gore’s 6.59% margin of victory in Clark County four years prior. Yet since Kerry narrowed the gap in historically Republican Washoe County, the overall race remained close.

Back then, Democratic Party leaders fumed over the Bush campaign’s success with such “values voters”. Some even blamed various progressive activists for Kerry’s loss, such as antiwar activists who criticized Kerry’s and other top Democrats’ muddled message on Iraq and LGBTQ+ civil rights activists who decided to stop waiting on party leaders to get on board with marriage equality. If this is starting to feel way too eerily familiar, I don’t blame you for the deja vu.

The 2020 election map did not form overnight. Notice these blue-to-red and red-to-blue shifts over time.

Here's good evidence some of Ohio is the rural south:

In a few counties in 2012, Obama improved on his 2008 showing. Where did that happen? Mostly in the south: Heavily minority areas + evangelical-heavy areas who weren't inspired by Romney.

Though the 2004 map is shaded differently from the 2020 map, there are definitely clues in that 2004 map that help us understand why the 2020 map has certain shades of red and blue in certain places. In 1992, then Arkansas Governor Bill Clinton (D) defeated President George H.W. Bush in Ohio thanks to not just a big margin out of Cuyahoga County (Cleveland), but also by racking up wins in the smaller but still populous industrial hubs of northeastern Ohio beyond Cleveland, and in the Appalachian foothills of southeastern Ohio. Though John Kerry managed to maintain Democratic strength in major northeastern Ohio counties like Mahoning and Summit, we can see that the whiter and more rural counties in southeastern Ohio were already starting to turn red in 2004.

Yet at the same time, the once traditionally Republican Franklin County, home to the state capital of Columbus and the Ohio State University, went blue for Kerry by a surprisingly strong 9%. Meanwhile in the (then) solid red state of Virginia, the more affluent and college educated Washington D.C. suburbs of Fairfax County flipped from red to blue in 2004, even as the more rural Appalachian counties of southwestern Virginia had already begun flipping from blue to red.

Heading west again, similar changes were underway in Colorado. Though Kerry struggled to replicate Bill Clinton’s wins and margins in the more rural (and in many areas, mostly Latinx) southern Colorado counties where Clinton did well in 1992, he outperformed Clinton and the general Democratic baseline in the more affluent and college-educated Denver suburbs, such as holding Bush to a mere 3% win in the traditionally GOP-friendly Arapahoe County. Kerry also outperformed the traditional Democratic baseline in Western Slope ski towns like Steamboat Springs, Aspen, and Telluride – though they’re rural, they’re nonetheless more college-educated areas than the southern Colorado communities where Kerry struggled.

Let’s return to 2020. Do these shifts make more sense now?

Colorado has gone from being a swing state Bush won twice to a safe Democrat state. This is in large part due to increasing Democrat margins in the Denver Metro Area.

Notice any patterns yet? As we flash forward to here and now, we can see how certain trends that were underway in 2004 have accelerated since then. Donald Trump is on track to win Ohio by almost exactly the same 8%+ margin he won Ohio four years ago. Not only have nearly all the ancestrally Democratic, mostly white, and rural southeastern Ohio counties turned blood red for Trump, but he even managed to flip northeastern Ohio counties like Mahoning that were once considered part of the backbone of the Democratic Party. Meanwhile, Biden added to Hillary Clinton’s stunning overperformance in the more diverse and college-educated urban hubs of Franklin County and Hamilton County (Cincinnati).

Just as the rural Appalachian counties of southeastern Ohio have fallen away from Democrats, so have the rural Appalachian counties of southwestern Virginia. Yet unlike Ohio, President-elect Joe Biden looks set to win Virginia by about double Hillary Clinton’s already solid 5.3% 2016 victory. That’s mainly due to Biden building on Hillary Clinton’s already hefty margins in the D.C. suburbs (FYI, Biden is winning Fairfax County by 42%!), the Richmond region, and the Hampton Roads, even flipping the historically GOP-leaning Virginia Beach.

Moving back to Colorado, Biden’s struggles in the southern end of the state echo John Kerry’s and Hillary Clinton’s respective underperformances there, though he at least managed to narrowly win back Pueblo County (though not by as much as Kerry did in 2004). However Biden took Kerry’s almost 5% loss and Clinton’s almost 5% win, and he’s set to turn in a rock-solid 13.5% victory in the Centennial State thanks to mind-blowing landslide margins in not just Denver itself, but also in suburban counties like Arapahoe (where Biden won by just over 23%!), and in those “rural yet worldly” Western Slope ski towns.

Regardless of what President Donald Trump, U.S. Senator Lindsey Graham (R-South Carolina), and other pro-Trump Republicans continue to claim, President-elect Joe Biden has won Nevada and the overall presidential election. The 936 vote discrepancy in the Clark County results that will probably lead to a special election for the Commission District C seat is nowhere near enough to overturn the presidential results. Now with that out of the way, let’s return to our reality-based discussion.

In a curious echo of 2004, Biden underperformed here in Clark County, only winning by 9.35% after President Barack Obama and Hillary Clinton won Clark by double digits. Meanwhile up north, Biden won Washoe County by 4.51%, a slight improvement from Obama in 2012 and Clinton in 2016. Once we also factor in Rural Nevada, where we mostly just see minor shifts from 2016, we can better understand why Biden’s 2.4% statewide margin of victory in 2020 is almost exactly the same as Clinton’s in 2016.

6) We see similar patterns in another key state; Arizona

Here, majority-Latino precincts in Phoenix shifted towards Trump by ~2.5 % pts

But turnout in these areas — which still broke 72%D to 27%R — surged by 32%, so they still added thousands more new votes for Biden than Trump pic.twitter.com/GS8xo0dNK3

I really wonder if this would still be true in today's political-media ecosystem. This was basically Beto O'Rourke's approach — and he gotten eaten alive on Day 1 in Iowa. What would happen if the Barack Obama of 2008 ran in 2020? https://t.co/MiSjtw5O9l pic.twitter.com/QkPtZf4nLz

So what happened? In the weeks ahead, we’ll do our traditional, biennial precinct-level deep dive to get more exact numbers that will help us see the full story. But for now, the aerial view is already giving us a pretty clear picture.

For all the (mostly white) national media pundits’ hyperventilating about how “Hispanics jump to Trump!”, the full reality of what voters of color did still looks more complicated and complex than these pundits present in their “hot takes”. As we just poured through on this very page, college education and the larger group of Americans whom Dr. Richard Florida infamously dubbed “The Creative Class” are increasingly becoming a determining factor in political trends and election results. And even though Clark County’s population is more racially and ethnically diverse, Washoe County’s population is slightly more college-educated.

My last word, at least for now: Please, no more lazy and stale “hot takes”!

In the weeks ahead, we’ll dive even deeper into our election results to figure out all of what happened and why it shook out that way. But from what we’ve already seen thus far, we can probably rest assured of a few things.

First, the COVID-19 pandemic and subsequent shutdown of Democratic in-person campaign activities for the entire spring and summer made it harder for Democrats to execute their traditional field-heavy strategy, but the Culinary Union’s decision to relaunch their field program early may have really been Democrats’ saving grace here. Second, Biden’s struggles with Latinx voters earlier this cycle were no surprise to community leaders, and his campaign’s later turnaround may have at least helped him maintain Obama-level margins in Latinx-heavy areas outside South Florida and South Texas. And third, for all the same (mostly white) national media pundits’ and Democratic Party establishment leaders’ hyperventilating about how the Black Lives Matter movement and some activists’ call to “Defund the Police” allegedly kneecapped Biden and annihilated down-ballot Democrats, we can see from our own not-so-distant history that this fast-and-furious scapegoating of progressive activists simply obscures the Democratic Party’s real problem of developing their own message, communicating it effectively, and making it appealing to a broader audience.

This is why our biennial post-election deep dives have become a Nevada tradition. We can’t afford any more terrible punditry, and we can’t stomach any more stale and cold “hot takes”.

A day after touring a section of the U.S.-Mexico border where he claims to be “building the wall”, President Donald Trump returned to Las Vegas to boast about “The Wall”, his administration’s handling
Read More 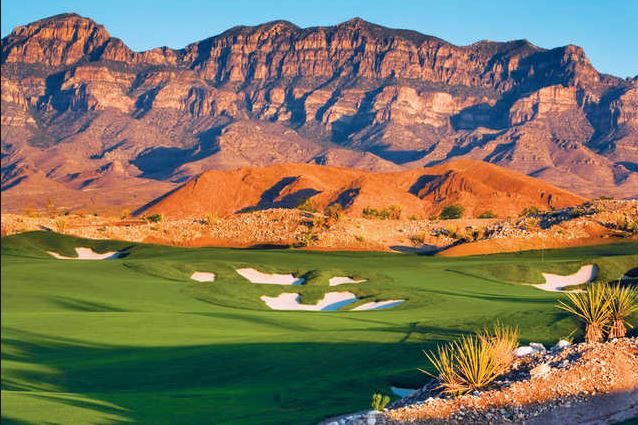