Last night Cindy McCain, the surviving spouse of the Republican Party’s 2008 presidential nominee, joined other Arizona military families in speaking up for 2020 Democratic presidential nominee Joe Biden. Tonight, U.S. Senator Jacky Rosen (D) joined some of the folks behind the hit Broadway musical Hamilton to encourage Nevadans to get out and vote for Joe Biden.

While the two Zoom calls gave very different vibes, ultimately I noticed quite a few common threads as they all promoted the same candidate, the same message, and the same values.

Even as the polling landscape looks great for Joe Biden, a lot of Democrats still wonder whether it’s too good to be true.

With just 2 weeks to go before the election, we break down the big threats to democracy and national security – and Hunter Biden's phony laptop isn't among them! We discuss election interference, John Roberts' role in desecrating U.S. democracy, and more: https://t.co/YQOFadQsE7

This is what we’re dealing with.

Trumpism is an alternate, paranoid reality and the Right is swimming in fascistic misinformation. Decades of manipulation and propaganda created this, and we’re going to be fighting it for years. https://t.co/lvllVi17W4

Even though the overall national and swing state polling picture continues to look great for Joe Biden, and even though early voting returns so far here in Nevada and nationwide seem to point towards a Biden advantage, it’s easy to sense a wide array of emotions among Democratic activists. Some look at the polling and early vote evidence and feel a little more confident, while others remember how President Donald Trump won in 2016 and feel dread.

Ever since caucus/primary season, Democrats have wondered whether Biden’s general election strategy would work. Can he really win over that many Republican crossover votes? Can he find a way to excite the Democratic base? Does he have a plan to counter Republicans’ never-ending smear campaign against him and his family? (Seriously, why are we still talking about Hunter Biden?!) Does he even realize how different America is in 2020?

As I’ve been clarifying all year, it’s never over ‘til it’s over here in Nevada. But even with Republicans doing as well as they are in in-person early voting, Democrats are doing so well in vote-by-mail (VBM) that I’m sticking with my current projection until I see enough evidence to merit a change. And in the meantime, let’s cross the Colorado River (virtually) to see how Biden’s “unifying” message is playing out in America’s hottest swing state.

“I am a Republican. I have no intention of changing my party. I’m doing what I’m doing because it’s what’s right for this country.”

Right around the same time when Reps. Alexandria Ocasio-Cortez (D-New York) and Ilhan Omar (D-Minnesota) played Among Us on a Twitch livestream to encourage young progressives to vote for Biden and other Democrats, McCain and others from Arizona military families were promoting the same ticket, but to a very different audience.

As she cited Trump’s infamous “losers and suckers” insult toward military service members, as well as reports detailing how Trump did nothing after being briefed on the Russian government offering bounties to the Taliban to kill U.S. troops in Afghanistan, McCain stated, “It’s all very personal. All voting is very personal. For me, what makes a difference is that I feel very unsafe right now. I feel like my country has forgotten me, and my sons, and my daughters.” She continued, “With Joe Biden, I feel we will have someone who will have our back. We will have someone who respects our U.S. military.”

“All of these fruits we’re seeing are very wicked and vile. This president will not produce any good fruit any time soon because I don’t believe he can bear good fruit.”

At times, it feels like this election is more like multiple elections happening in different universes. While (mostly white) national media pundits continue to make claims about Trump’s alleged “gains with Hispanic voters” that expert pollsters like the folks at Latino Decisions still aren’t detecting, some of these same pundits take note of Biden’s growing list of prominent (ex?-)Republican endorsers and wonder how it’s playing among the suburban moderates Biden wants to lock down, the young progressives Biden’s still working to lock down, and the ubiquitous non-college white voters in Midwestern diners who’ve gotten the most national media attention since 2016.

Looking at someone like Stuart Snedecor, a white evangelical Christian from a military family, we’d assume he’s a staunch Republican. Indeed, he had been for years. However during last night’s virtual event, Snedecor revealed, “It’s not easy being a Republican and a Christian in Arizona and coming out in favor of Joe Biden.”

While Cindy McCain refrained from addressing Trump’s long history of attacking her late spouse John McCain, Snedecor and the other speakers did. And later in the call, Snedecor took to the Bible (more specifically, Matthew 7 and Luke 6) to explain why he can not support Trump: “A good tree can not bear bad fruit. A bad tree can not bear good fruit. […] These fruits manifest themselves in a person’s heart.”

Snedecor then added, “I am struck by the fruit born in this presidency: the lies, the conspiracy theories, over 220,000 people dead [from COVID-19], the separation of families at the border, anti-government militias trying to [overthrow Democratic Governors]. All of these fruits we’re seeing are very wicked and vile. This president will not produce any good fruit any time soon because I don’t believe he can bear good fruit.”

In opening the Nevada virtual event, Rosen described the stakes of this election: “It is going to have a direct impact on our future: the future of our families, and the future of our country. We have to vote!”

Don’t throw away your shot to vote this year — make a plan at: https://t.co/xKA4jE1giV pic.twitter.com/DqwuARkM4F

As Rosen spoke with these key figures behind the hit musical-turned-movie, they connected the key themes of Hamilton, such as the evolution of America from a nation dominated by white men who kept slaves into a multiracial and multicultural democracy, to the existential crisis facing American democracy today.

The only way you can make a difference is if you vote.”

While the two Biden events in two neighboring states seemed to target two very different audiences, I did notice quite a few common threads. About 24 hours after Stuart Snedecor invoked the Gospels of Matthew and Luke to condemn Trump’s “bad fruit”, Alex Lacamoire used his own tree analogy to explain the 244 years of growing America’s democracy: “They’re planting seeds today. They might not get to see the fruit of their seeds, but they’re planting them.”

About 24 hours before Lacamoire lamented “this feeling of divisiveness, this feeling of us against them” during the Nevada call, McCain used her time on the Arizona call to declare, “It’s time we demand as Americans respect. We should demand respect and bipartisanship and civility. We will get that under Joe Biden.”

As she remarked on the values that make America great, McCain declared, “We are the greatest country ever, and I believe Joe Biden will reinvigorate [the values] that make this country great.” And towards the end of her event last night, she made this request: “We need to have courage as a people to step across the aisle. […] The only way you can make a difference is if you vote.”

And towards the tail end of the Nevada Hamilton themed call, Rosen declared, “People have risen up to fight injustice in our neighborhoods. It’s what we have done. It’s what we can do. Each one of us has the power to make a difference.” And in closing, Yvanna Cancela made this request: “All of us have to vote. It is our shot.”

For more information on how to vote this year, check out the Nevada Secretary of State’s comprehensive site explaining our various options. If you’re already registered to vote at your current address and you voted in 2018, you were probably mailed a ballot thanks to AB 4 becoming state law in August. Once you receive your ballot, you can either mail it in or turn it in at a secure drop-off site. If you still need to register for the first time or update your registration, you can either register to vote online now or at a local voting site. And for more information on how to vote this fall, NBC News and The Washington Post have great resource guides to keep on deck.

The cover photo is a screenshot captured by me. 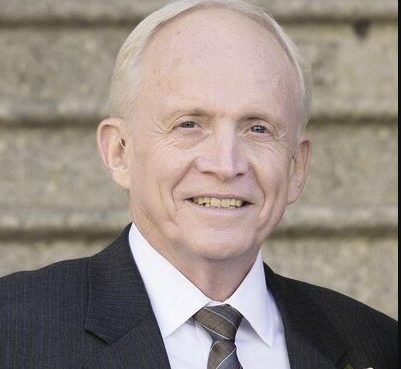 Note: I am posting this obituary in memory of my high-school friend Don Van Noy. M. DON'S OBITUARY Melvin Don Van Noy passed away from the indiscriminate COVID 19 on November 8, 2020. He was born
Read More