Washington — Bill Taylor – the top U.S. diplomat in Ukraine – testified on Tuesday that U.S. aid to Ukraine was explicitly tied to the country’s willingness to investigate President Trump’s political rivals, providing new details about the events at the center of the impeachment inquiry.

William Taylor, the chargé d’affaires of the U.S. embassy in Kiev, delivered a 15-page statement behind closed doors to members of the House committees leading the impeachment probe. Taylor emerged as a key witness in the investigation into the Trump administration’s efforts to pressure Ukraine when text messages between him and two other top diplomats came to light earlier this month.

In the statement, Taylor describes a concerted effort to use U.S. leverage to get Ukrainian President Volodymyr Zelensky to commit to opening investigations into debunked allegations of Ukrainian interference in the 2016 U.S. election, as well as the gas company Burisma, which had hired former Vice President Joe Biden’s son in 2014. Taylor said these efforts came via an “irregular, informal channel of U.S. policy-making” consisting of Rudy Giuliani, then-special envoy Kurt Volker, Energy Secretary Rick Perry and U.S. Ambassador to the E.U. Gordon Sondland.

In the meantime, Today,  Laura Cooper, the top Pentagon official overseeing U.S. policy regarding Ukraine, testified in front of House impeachment investigators on Wednesday after a five-hour delay caused by a group of House Republicans who stormed the secure room where the deposition was taking place.

Matt Gaetz tweeted that:  “BREAKING: I led over 30 of my colleagues into the SCIF where Adam Schiff is holding secret impeachment depositions. Still inside – more details to come.”

Unfortunately for Gaetz he just claimed that he not only took his phone into the SCIF, he tweeted from it while inside the SCIF. This would be a clear criminal act, and for that matter a written confession to the criminal act.

After massive push-back across social media, this addendum was just added to Matt Gaetz’s tweet: “**Tweet from Staff**” 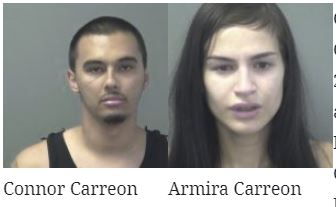 COVID-19 continues to spread in Nevada and throughout America, though we’re now seeing some mixed signs on whether we’re entering a “fourth wave” of increasing infections or resuming further improveme
Read More