On Tuesday, Bundy’s malcontents demonstrated at the homes of The Central District Health Board members participating in a virtual conference to hear from local health professionals before voting on a four-county mask mandate in Idaho’s most populated areas. Bundy’s attendance at the rally remains unknown.  Members of an anti-vaccination group called Health Freedom Idaho also attended the protest.

Ada County Commissioner Diana Lachiondo tearfully interrupted the online meeting to say she had to rush home from work to be with her son. “My 12-year-old son is home alone right now, and protesters are banging outside the door,” Lachiondo said.

Another board member, family physician Dr. Ted Epperly, said protests were “not under control at my house” as well.

“I got a call from the mayor, and it sounds like the police, and she is requesting that we stop the meeting at this time because of the intense level of protesters in the parking lot and concern for police safety and staff safety as well as the protesters that are at some of our board members’ homes right now,” Duke said. The meeting ended.

In August, Bundy was arrested twice over two days at the Idaho State 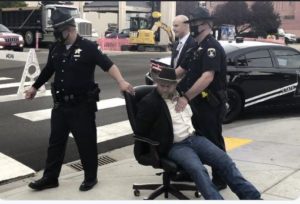 On August 25, 2020, officials charged Bundy with criminal trespass for actively disrupting legislative hearings and refusing to leave the building when directed to do so by the Speaker of the Idaho House of Representatives.

He was arrested again on August 26, 2020, for criminal trespass and resisting arrest after returning to the Idaho State Capitol Building shortly after posting bail for the first offense

Tuesday’s protest followed an October 2 event when Bundy refused to wear a mask during a high school football game between the Emmett Huskies and Caldwell Cougars. The principal and athletic director repeatedly asked Bundy to either wear a mask or leave the school grounds. Bundy refused and climbed over a chain-link fence to watch the game. Officials canceled the game. Bundy born and raised in Nevada now lives in Emmett,

During the high school game week, the statewide total of confirmed COVID-19 cases amounted to 39,137.  That week, health officials reported 553 new cases confirmed by lab tests with an additional 124 probable cases statewide. These were the highest number of daily cases reported since August 6. 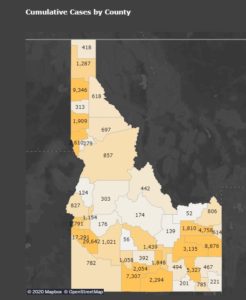 Today, The Idaho Department of Health and Welfare reported that the Virus had infected at least 116,203 Idaho residents. They reported 2,298 new cases on Wednesday. So far, at least 1,006 residents have died of COVID-19, officials said. The Department puts an additional probable death at 96.

In 2016, Bundy, and his brother Ryan, gained widespread attention by leading the 2016 occupation of the Malheur National Wildlife Refuge. An Oregon state trooper fatally shot LaVoy Finicum, a participant in the occupation who allegedly reached for his weapon when confronted on a snowy, tree-lined rural road in central Oregon.

In the meantime, The Central District Health (CDH) has rescheduled its Board of Health will meet at 3:30 p.m. Dec. 15 to discuss the public health order. The meeting will be held virtually and can be live-streamed on CDH’s YouTube page.

[i] Based on preliminary data collected from death certificates 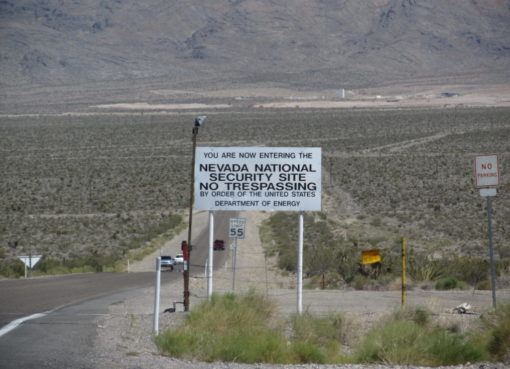 Going Nuclear: What’s Going on at the Nevada National Security Site, Why Is Yucca Mountain Still Up for Debate, and Why Does Any of This Matter?

Did you feel it? I didn’t, as I was out of town when it happened. But for everyone who was in Southern Nevada during the Fourth of July weekend, they felt not one, but two back-to-back major earthquak
Read More

Last Thursday U.S. district judge, Emmet Sullivan, of the District of Columbia threatened to hold Attorney General Jefferson Sessions, and others in contempt of Court for arguably aided and abett
Read More