Oil and gas companies are increasingly treating and reusing flow-back water from fracked wells, which, unlike freshwater, is very high in salt, with good results. The practice scales down the amount of freshwater used for fracking, but environmentalists say it does nothing to assuage concerns about groundwater contamination, and only facilitates the extraction of fossil fuels that produce climate-warming gases.

Fracking, developed in the 1940s, involves the drilling of vertical wells and the pumping of pressurized water into rocks to release the gas.  In the 1990s, horizontal drilling was developed and combined with fracking. This enabled drills to descend to 10,000 feet, then curve to drill horizontally so drillers could access gas trapped within shale layers.[i]

Hydraulic fracturing allows energy companies to access “unconventional” resources of gas, once considered too difficult or costly to extract, such as gas found deep underground, in tight impermeable rock formations, in coal beds, or trapped in layers of shale, fine-grained sedimentary rocks. In 2014 some form of fracking was used in 90 percent of all new onshore oil and gas development and currently accounts for 60 percent of natural gas production in the U.S.[ii]

“Much of the public fear about fracking has centered on the chemical-laden fracking fluids — which are injected into wells at the start of production — and the potential harm they could cause if they spill or are disposed of improperly into the environment,” said Avner Vengosh, professor of geochemistry and water quality at Duke’s Nicholas School of the Environment.[iii]

“Our new analysis, however, shows that these fluids only account for between 4 and 8 percent of wastewater being generated over the productive lifetime of fracked wells in the major U.S. unconventional oil and gas basins,” Vengosh said. “Most of the fracking fluids injected into these wells do not return to the surface; they are retained in the shale deep underground.

“This means that the probability of having environmental impacts from the human-made chemicals in fracking fluids is low unless a direct spill of the chemicals occurs before the actual fracking,” he said.

More than 92 percent of the flow-back and produced water — or wastewater — coming from the wells is derived from naturally occurring brines that are extracted along with the gas and oil.

This brine carries its own risks, Vengosh stressed. They contain varying levels of salts, heavy metals, and naturally occurring radioactive elements, and their sheer volume makes disposing of them a challenge.

Consuming high amounts of water in arid western states by fracking and dealing with the wastewater is a concern. In a typical month, the amount of wastewater generated by the fracking process in New Mexico, the country’s third-largest producer of oil, would be enough to fill Elephant Butte, the state’s largest lake. [iv]

Ken McQueen, who heads the New Mexico Department of Energy, Minerals, and Natural Resources, recognizes that: “Oil and gas in New Mexico provide over a third of our general fund.” He added that: “We have to be concerned we’re doing what’s necessary into the future to make sure this industry continues to be alive and vibrant.”

McQueen thinks the reclaimed wastewater could be a boon to New Mexico farmers and ranchers who need water for their crops and herds. Factories could use it, and it might help revive parched wildlife habitat, he said. And even though the wastewater is filled with salt and other minerals, it might even be treated and used for drinking.

“But with proper treatment, they potentially could have beneficial reuses,” he said, “especially out West, where our study shows most brines being produced by fracked wells are much less saline than those in the East.”

In Texas, oil and gas exploration and production companies are under pressure to reduce the amount of freshwater used in dry areas and to cut the high costs of hauling millions of barrels of water to oil and gas wells and later to underground disposal wells.

Fracking makes up less than 1 percent of overall water use in the state. However, it makes up more than 50 percent of water use in certain counties, according to a 2011 report by the University of Texas.[v]

The Railroad Commission of Texas, which regulates the Texas oil and gas industry, adopted rules to encourage recycling. Under those rules, operators no longer need a permit to recycle water if they are on their own land leases.

The U.S. Environmental Protection Agency could also implement rules concerning recycled water when it delivers its study of hydraulic fracturing next year.

Transportation is by far the costliest element of water management for fracking. For energy companies, the use of flow-back water for fracking eliminates the need to truck wastewater to disposal wells. On-site water can be treated and reused for the next frack. Besides, water that comes from underground is better suited for fracking and requires less chemical treatment because it is compatible with a well’s native geology.

“When you use water that’s native to that formation, your chemical is either nil or not required at all,” said Tom Whalen, Baker Hughes’ vice president of water management.

Researchers from The Texas A&M Energy Institute and the Artie McFerrin Department of Chemical Engineering are developing methods to reduce the amount of water needed in the natural gas extraction process, and to treat wastewater so that it is safe for reuse. [vi]

El-Halwagi is professor, holder of the Bryan Research and Engineering Chair in Chemical Engineering and managing director of the Texas A&M Engineering Experiment Station’s Gas and Fuels Research Center (GFRC) is the principle investigator (PI) of a Department of Energy (DOE) research project entitled, “Deploying Intensified, Automated, Mobile, Operable and Novel Designs (DIAMOND) for Treating Shale Gas Wastewater,” focused on developing integrated design and operating approaches for modular systems that can be deployed in the treatment of hydraulic fracked wastewater.[vii]

And at the University of Pittsburgh’s Swanson School of Engineering was awarded $1.76 million [viii] to conduct pilot testing of membrane distillation technology in the Marcellus and Utica Shale. [ix]

[i] Horizontal drilling is 3 to 5 times more productive than vertical drilling.

[v] Groom Nichola “The oil and gas industry is finding that less is more in the push to recycle water used in hydraulic fracturing   July 15, 2013 at: https://www.scientificamerican.com/article/analysis-fracking-waters-dirty-secret/

[viii] As part of the the 5.3 million from the the Department of Energy (DOE) RAPID Manufacturing Institute, 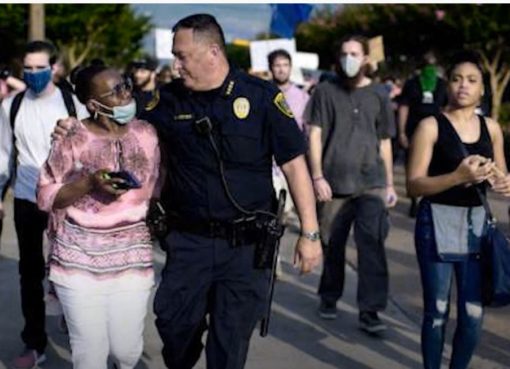 Real America In Times Of Crisis

Is COVID-19 some secret "globalist bio-weapon"? Has President Donald Trump been right all along about hydroxychloroquine being a “game changing miracle cure”? Might special magical beads deliver the u
Read More

Colorado River in Drought, Climate Change Even Less in Doubt

According to new federal government forecast models, the Colorado River will remain in drought conditions for at least the next five years. Between the wildfires that are burning now and this stark po
Read More