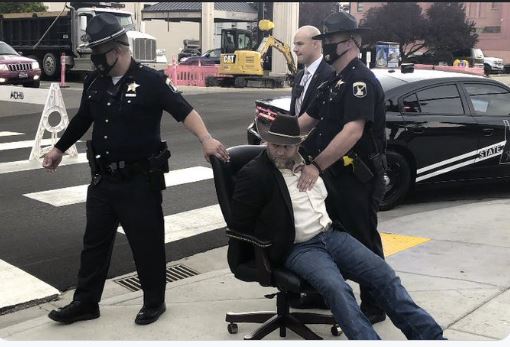 The removal of Bryan Bowermaster,33, Boise, from Idaho Statehouse. He was was charged with trespassing.

On July 1, Ammon Bundy was found guilty after a four-day jury trial and brief jury deliberations. Officials charged Bundy with resisting and obstructing officers during the August 25, 2020, legislative committee discussing and voting on several bills, including one to end Gov. Brad Little’s state of emergency over the Coronavirus. Officers ultimately wheeled him out of the Capitol building on a swivel chair

Bundy received three days in jail. But with credit for time served, he will do no additional jail time. Magistrate Judge David Manweiler also imposed 48 hours of community service and a $750 fine for Bundy.

A co-defendant, Aaron Von Schmidt, was found guilty of misdemeanor trespassing. He was sentenced to three days in jail and got credit for time served and a $500 fine.

On Monday, Bundy participated in protests at the statehouse resulting in shattering a glass door, rushing into and shoving their way past state police officers, and taking over a limited seating area of the House chambers. The protesters, some armed with rifles, ignored social distancing rules, and the majority, including Bundy, did not wear a face mask.

Republican House Speaker Scott Bedke allowed the gallery to fully open as long as the crowd stopped chanting and was respectful, and there were no arrests.

A spokeswoman for the Idaho State Police said an investigation is underway into any criminal behavior that may have occurred during the Monday protest.

Bundy and other protesters returned on Tuesday. Tuesday’s unrest started when the committee chairman, Republican Rep. Greg Chaney, directed two people sitting in an area reserved for credentialed members of the media to leave those seats. The Capitol Correspondents Association controls press credentials.

“I’m not sure precisely what their goal is, but I’m absolutely sure that the two individuals whom I asked to leave were intending to create a scene,” he said. “At times in the last 24 to 36 hours, this building has descended into complete chaos, and the only way to make sure that all citizens feel comfortable coming here to be heard is to make sure that we don’t allow rule deviations in general.”

On Tuesday, The House passed (48-20) a concurrent resolution that would end the coronavirus emergency declaration that Gov. Little signed in March. It remains unclear if the Senate will consider the measure, or whether the Legislature is even allowed to address the topic in the special session, since  it was not a topic the governor outlined as required by the Idaho Constitution.

Nonetheless, Bunday refused to leave a large hearing room in the Capitol. State Police arrested him around 5:30 p.m and charged him with trespassing, and resisting and obstructing police.

“Troopers were forced to physically remove Bundy from the Senate gallery, take him through a stairwell, place him in a wheelchair, and then into a patrol vehicle,” according to the ISP tweet. Bundy posted a bond that night and released from jail.

Earlier in the afternoon, Bryan Bowermaster, 33 of Boise, was removed from the statehouse after he violated assigned seating guidelines and took the spot reserved for credentialed journalists, according to the state police. Bowermaster was charged with misdemeanor trespassing, according to the police.

Bundy returned on Wednesday and was again removed by Idaho State Police and charged with misdemeanor trespassing and resisting and obstructing officers.

Keith Reynolds, director of the state Department of Administration, said an order of trespass had been issued against Bundy. In the past, they’ve used the orders for people who have been arrested in the building.

Reynolds explained that the letter does state that if Bundy has legitimate business at the Capitol, he can contact state security to make arrangements to come in. Meanwhile, he has been banned from the property for a year.
The order states that Bundy presents “a threat to disrupt the legitimate business there.”

Bundy again posted bond on Wednesday and was released.

Click here for more information on the Bundy clan

COVID-19 continues to spread, but the pace of this spread varies. Here in Nevada, we’re seeing our stats improve again after a brief bump in infections. But nationally, the picture looks more stagnant
Read More

He’s out. She’s out. He’s out. And now, he’s out. After seven months of pundits and reporters pointing and laughing over “the largest Democratic presidential field in modern history,” the field is sud
Read More

Mesquite Water Board Defense in Law Suit Based On “reporter” Investigation, Attorney Argues

Las Vegas, Nv. For about 10-billable hours, over two court days, the publicly paid attorney for the Virgin Valley Water District (VVWD), Mesquite, Nv.  babbled on-and-on about the use of city-managed
Read More